Space Brothers: Don’t Give Up on Those Childhood Dreams 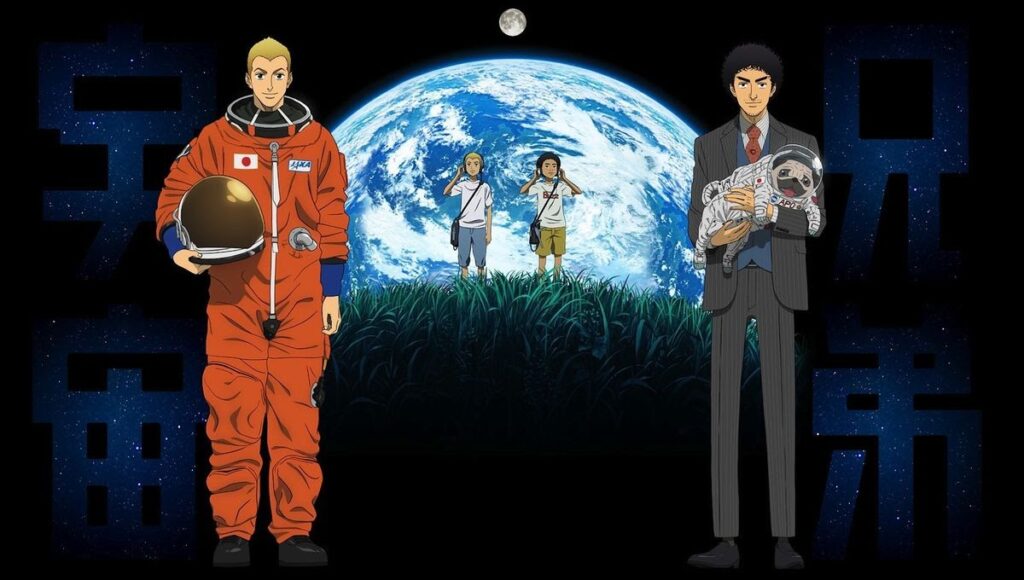 I grew up an only child. Admittedly, I never wished for a brother or sister, but there was always a part of me that felt somewhat envious of those with siblings. Someone always around to talk to, someone to play with, someone to fight with as bratty teenagers.

One reason I didn’t want this experience, however, is the neverending competition it seems to bring.

It’s a cloud that would often hang over the head of best friends, who would complain about never being good enough. Who would do better in school? Who would excel in dance competitions or softball games? Would I really want to live a life of constant comparison, and if I did, would I come out victorious?

Space Brothers is a manga series that hasn’t always gotten the attention it deserves, despite having won numerous awards and having an extremely lengthy anime adaptation. Did I mention it has an anime movie and a live-action movie? If you get into the series, you won’t be short on content, that’s for sure.

Before you watch or read, consider this question: did you make your childhood dream come true as an adult? If you did, good on you. If you didn’t, have you given up? Space Brothers might just convince you to get back on the horse.

A Heartwarming Tale of Two Brothers with One Dream

Space Brothers is the story of, as you’d guess, two brothers, Mutta and Hibito Nanba, who believe they see a UFO one night in the summer of 2006. Because of this life-changing incident, the brothers make a pact to someday become fully-fledged astronauts, to discover the truth behind the mysterious object they saw in the sky as children.

Hibito decides to shoot for the moon (literally), while Mutta is more interested in journeying to Mars.

Flash forward to 2025. Hibito has, as promised, become a JAXA (Japan Aerospace Exploration Agency) astronaut, about to take off on a mission to the moon.

How did Mutta fare? Not as well. He was fired from his job for literally headbutting his boss, and has forgotten his original dream after pushing it out of his mind for years. After remembering that night so many years ago, he gets a letter in the main informing him that he’s been accepted into a new astronaut training program!

Space Brothers tells the story of Mutta, and his attempt to follow in his brother’s footsteps by becoming an astronaut and flying into the unknown. Will they ever find out what they really saw that night? Does Mutta even have what it takes?

Who Are Mutta and Hibito Nanba?

Mutta Nanba – The older of the brothers, Mutta was born on the day that Japan lost the FIFA World Cup qualification match in Qatar in 1994. (Yes, the manga is very explicit when it comes to this.) Known for his big hair and even bigger competitive spirit, Mutta always wants to beat his brother Hibito, no matter what the challenge is. Usually calm and quiet, he is quite intelligent, easily multitasking, and learning new skills without issue. Mutta blames many of his problems in life on bad luck.

Hibito Nanba – Born when the Los Angeles Dodgers pitcher Hideo Nomo threw the ball to lead the team to victory against the Colorado Rockies in 1996, (again, the manga is explicit) Hibito is the younger brother, and the first Japanese astronaut to go to the moon. Always optimistic and smiling, he goes by the nickname ‘Samurai Boy’ in America, where he has amassed plenty of fans. He greatly respects his brother and wants more than anything for Mutta to also become an astronaut.

The Space Brothers Manga is Still Going after 13 Years

Even after more than a decade, the story of Mutta and Hibito isn’t over yet. Space Brothers has been serialized in the popular Kodansha stable Morning magazine since 2007, with a staggering 350 chapters released so far. In the past, Morning has featured incredibly popular series including Devil Lady by Go Nagai.

So far, the chapters have been compiled into 37 volumes, and have been translated and released in North America and Europe. See the links at the end of the article to start your space journey!

The creator and illustrator of Space Brothers is Chuuya Koyama, who has actually had an asteroid named in honor of him due to the popularity of the series. (It’s named 13163 Koyamachuya, by the way. That’s pretty nifty.)

Whether you’ve heard of Koyama or not, he’s actually worked on a few things you may be familiar with, even if it’s not his manga.

He actually worked on creating one of the movie posters for the Ridley Scott film ‘The Martian.’ He then went on to do character designs for a Japanese version of the ‘Something Just Like This’ music video. Yes, by The Chainsmokers. Who would have thought?

Space Brothers was nominated for the prestigious Manga Taisho award in 2009 and 2010. The award limits itself to publications with less than eight volumes, to allow new creators a bigger chance of walking away victorious.

Impressively, the manga series went on to win three awards after this. In 2011, it won the Shogakukan Manga Award for best general manga. It went on the same year to win big at the Kodansha Manga Award.

The accolades weren’t finished there, because in 2014 Space Brothers picked up the Reader Prize from the Tezuka Osamu Cultural Prize. If I were one for gambling, I’d be ready to see Koyama snag a few more trophies before the manga ends.

In April 2012, an anime adaptation of Space Brothers began in Japan and was simulcast by Crunchyroll.  It was produced by A-1 Pictures, which has worked on a number of groundbreaking hits from Black Butler and Fairy Tale to Blue Exorcist and Your Lie in April.

If you haven’t seen Space Brothers, be prepared to settle in for one very long binge-watch. The anime series ran for 99 episodes between 2012 and 2014. Hey, that’s just under two days. Easy, right?

The director of the series is Ayumu Watanabe, who is largely known for his extensive work with the quintessential Japanese children’s series Doraemon.

One of the most interesting tidbits about the Space Brothers anime has to do with its voice acting. The 31st episode, titled ‘Rocket Road,’ features the first (and to my knowledge, the only) bit of voice acting ever actually recorded in space! Akihiko Hoshide, the third Japanese astronaut to walk in space, recorded the lines during his time on the International Space Station.

In 2012, one Space Brothers episode was aired throughout Japan in a very non-conventional way–in planetariums! Now that’s the perfect date night location.

Plenty of popular music acts have performed the opening and ending themes for the series, including Sukima Switch, Angela Aki, and Motohiro Hata, the latter having also performed themes for Itazura na Kiss, Kids on the Slope and Naruto: Shippuden.

In 2014, as the anime series was coming to an end, an anime film titled Space Brothers #0 was released in Japan. The original creator of the manga penned the script, which takes place four years before the epic anime TV series.

Sadly, while there have been armies of people online desperate for a Space Brothers season 2, nothing has ever been announced. The original anime series caught up to the manga which had been released at the time and was likely ended due to that, and to make way for the anime film. It isn’t impossible that season 2 is coming, but there is no news to report on that front. Time to form a prayer circle.

A Live-action Movie was Released in 2012

Over the years, it seems that more and more manga and anime series receive live-action movie adaptations. Whether you’re a fan of that or not, the Space Brothers movie didn’t disappoint, winning an award at the Puchon International Fantastic Film Festival and featuring music by British band Coldplay.

Oh, and Buzz Aldrin–yes, the Buzz Aldrin–makes a cameo in the film. That’s one giant step for films based on anime.

This movie was also written by the original creator of the manga, Chuuya Koyama.

The role of Mutta Nanba was played by Shun Oguri, who has starred in over 100 television, film and voiceover roles. Oguri played the popular character Alfons Heiderich in Fullmetal Alchemist the Movie: Conqueror of Shamballa, and very recently played Keisuke Suga in the Makoto Shinkai film Weathering with You.

Hibito Nanba was played by Masaki Okada, who has starred in dozens of films and television shows over his nearly 15-year career. He played Seijirou Itou in the popular film and television series The Many Faces of Ito, which is available on Netflix. He also starred in the first and second live-action Gintama films as Kotaro Katsura.

Where to Watch the Space Brothers Anime, See the Movie and Read the Manga

Currently, the Space Brothers anime series can be streamed on Crunchyroll and Hulu, with episodes available for purchase on Youtube, iTunes, and Google Play.

For those who prefer physical media, the series was released on two Blu-ray discs, available on Amazon.

The anime movie Space Brothers #0 is available on Blu-ray over at Amazon. It will also be streamed by HIDIVE starting May 18, 2020.

Sadly, the live-action movie is not currently available to buy or stream as of May 2020. The Space Brothers manga is available digitally from Kodansha, Crunchyroll, or Amazon.