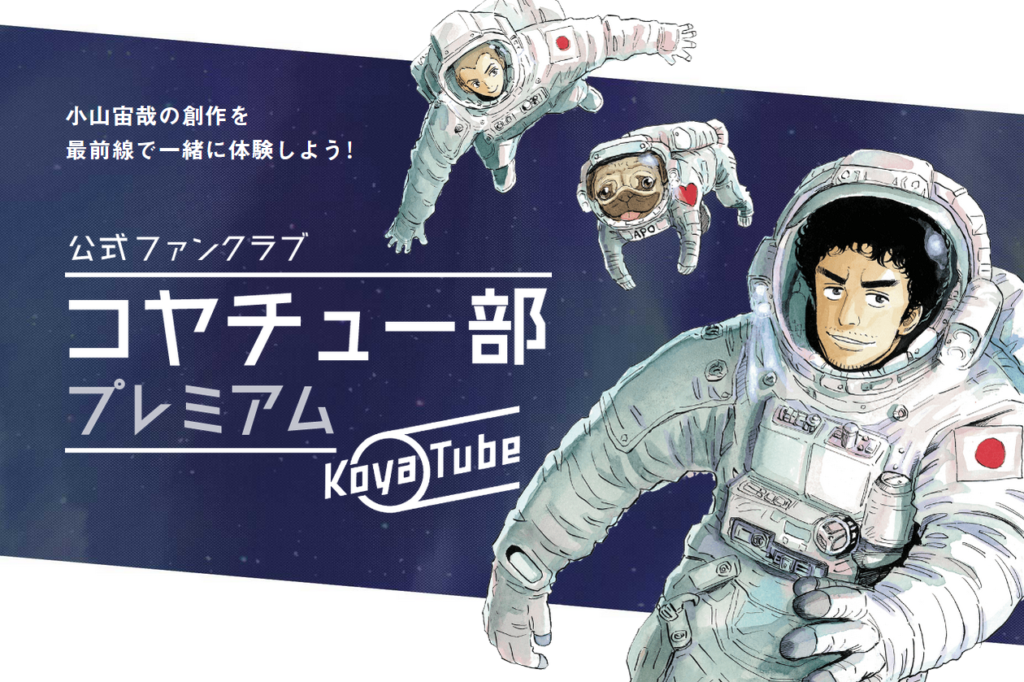 Space Brothers author Chuuya Koyama has launched a new, official fan club via his official website. For a fee of 500 yen per month, fans can receive special goods and exclusive information, as well as support the author, currently serialized in Kodansha’s Weekly Morning magazine, directly. This fits into a pattern of increasingly direct financial relationships between creators and fans, spearheaded most notably by the Studio TRIGGER Patreon, which launched in 2018.

Chuuya Koyama’s official fan club was actually initially launched back in April 2015 as a way of keeping fans up to date with the latest Space Brothers information but went premium on June 6. The reasons for this are twofold. Firstly, the new paid fan club aims to better facilitate the relationship between Koyama and his fans, allowing them to “see the world that he sees.” Secondly, it provides fans with a way of supporting Koyama’s “goals” as a creator directly. Koyama outlines four such aims:

These four “aims” very much resemble that of the Studio TRIGGER Patreon, which aimed to facilitate better communication with the fans as well as provide them with exclusive content on the basis of live drawing streams. Whether or not this has been successful is beside the point: what this shows is that there is an increasing tendency within the anime and manga industry to seek direct support from the fans, either through Patreon or fan clubs such as these.

The question, however, remains: why would Chuuya Koyama set up a premium fan club such as this? He is a very successful manga author, with Space Brothers winning several awards and surpassing ten years of constant serialization. Furthermore, to what extent is this fan club separate from his publishers? Will the money from the fans actually go to Koyama, or will it go straight into the already deep pockets of Kodansha? Clearly, more information is needed.

Either way, fans of Chuuya Koyama and Space Brothers will no doubt be interested in checking out the new fan club. You also get an exclusive key chain and membership card if you join, so don’t hesitate to make your way to the official website to do so.