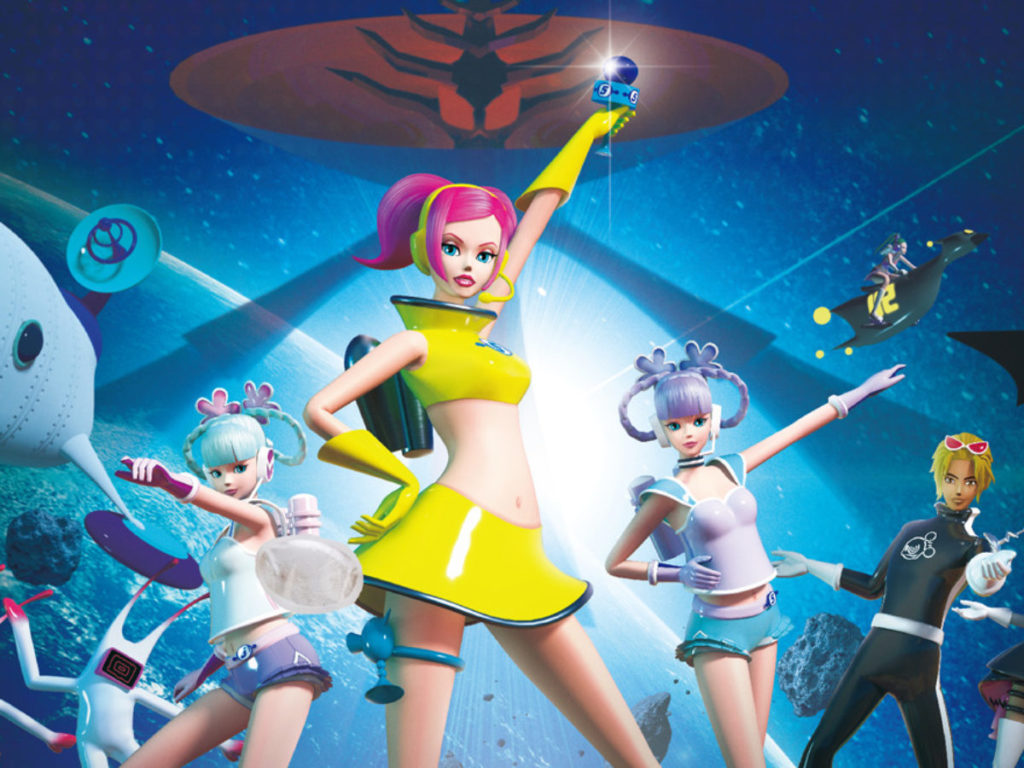 A non-stop disco party, only it is also an alien invasion and an ongoing live news report about said alien invasion. This is essentially what you are getting yourself into with Space Channel 5, Sega’s breakaway hit rhythm game for the Dreamcast back in December of 1999. Ulala is a news reporter working for, as the title implies, Channel 5 in a space setting.

Ulala dances and shoots at aliens, while rescuing hostages who have been forced to dance as a result of the aliens’ abilities. As she begins to convert the aliens and gradually save the universe, the ratings of her news program, and Channel 5 as a whole, gradually increase. It’s always about the ratings!

Despite the futuristic atmosphere (the events in Space Channel 5 actually takes place sometime around the year 2500), the game maintains a very 50s and 60s style through various motifs, most importantly the soundtrack, which is based off big band music of the time period.

The main theme, Mexican Flyer by Ken Woodman is presented over and over again with different variations and nuances, yet it always seems to fit perfectly and never gets tired. The style of dancing of the various characters, aliens, and human hostages Ulala encounters over the course of her reports fits in perfectly with the time period, making it feel as if the game were a sci-fi work of yesteryear.

Ulala came dancing and shooting out of the gates once again in the followup, Space Channel 5: Part 2 in 2002, this time coming to both the Dreamcast and the Playstation 2. Space Channel 5: Part 2 focuses more on the other characters in the SC5 universe, posing as both adversaries that stand in Ulala’s way, and later allies and partners in dance.

You have Pudding, a fellow reporter for the rival channel and news outlet, Space Channel 42, who was a former teen idol with her dance moves and electric guitar. Then there is Jaguar, the righteous space television pirate broadcaster, who initially hinders Ulala’s progress in the first game, but is rescued by her in Part 2.

There is also Fuse, who serves as the program director of Space Channel 5 and guides Ulala throughout both of her adventures remotely. Although he is never seen, he is constantly heard throughout the course of the game and is instrumental to the success of Ulala’s report.

But perhaps the most significant character of all is Space Michael, a character who made a brief cameo in the first game, but returns in a much larger role the second time around – the chief of Space Channel 5. Space Michael is based off in appearance, and voiced by the King of Pop himself, Michael Jackson.

Space Michael sports both the dance moves of Michael Jackson, as well as some of his iconic hoots and hoos. Jackson, who had maintained a professional relationship with Sega over the years and had previously collaborated a few different times throughout the 90s, is said to have approached Sega himself over interest in wanting to make a cameo in the game, and it worked out brilliantly, giving even more charm to an already unique game.

Ulala is Returning to the Spotlight, This Time in VR

Space Channel 5 VR: Kinda Funky News Flash was first teased in 2019, with a planned release at the end of the year. As of the 25th of February, 2020, the PSVR version of the game has finally made its way to the Playstation Store. At a yet to be determined later date, it will arrive on Steam for the Oculus Rift and Valve families of VR headsets.

Not only does it feature exciting new characters, but new modes have been announced as well, including a story mode, an arcade mode, an endurance dance mode, a mode where the action can be viewed from different angles, and several non-gameplay modes such as a character index, and a mode where you can customize the look of Ulala’s outfits.

Does Ulala’s move to VR mean that we will see more of her in the future? Hopefully so; the idea of motion controls and physical gameplay brings a new dynamic to this old classic that will equate to potentially dozens of hours of fun. The only way it gets any better is when there is more.