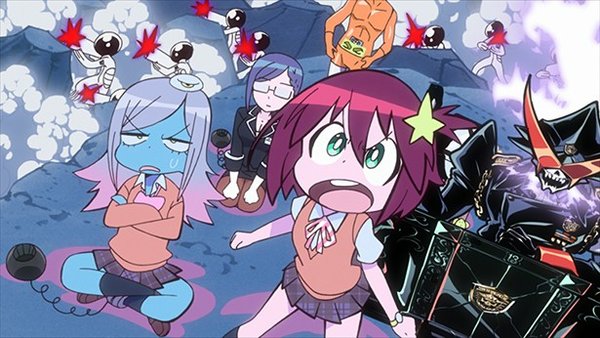 Space Patrol Luluco is Studio TRIGGER’s 5th anniversary love letter to their fans worldwide. Originally airing as part of Ultra Super Picture Time block in 2016, the 12 episode show does it’s best to include as many of the studio’s previous works as licensing would allow.

Lead by Hiroyuki Imaishi (Gurren Lagann, Kill la Kill, Promare) the show would enlist everyone in the studio in order to create the most quintessential TRIGGER experience possible.

What is Space Patrol Luluco?

The show follows Luluco, a girl who just wants to live a normal life in a future Ogikubo (TRIGGER’s location at the time) overrun by bizarre aliens.

Attending an otherwise ordinary highschool barring her cohort full of aliens, she is forced to join the bombastic Space Patrol after she accidentally puts her father, Keiji, into a cryostasis.

Being armed with a suit that automatically turns her into a gun when detecting a criminal, her attempts at having an ordinary life are all but over. 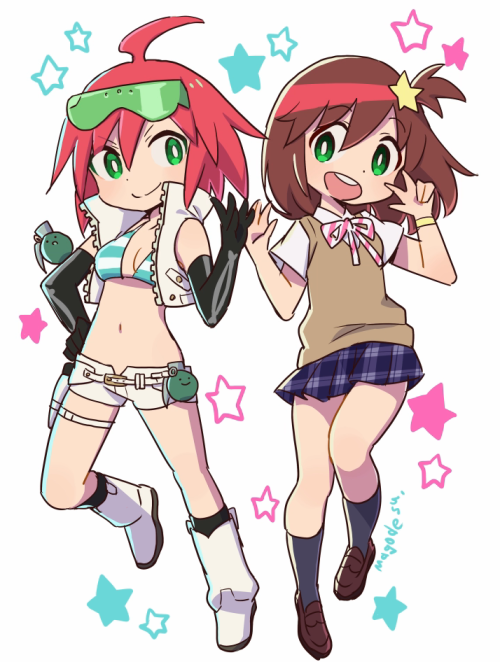 The premise of Space Patrol Luluco is to tell the backstory behind TRIGGER’s primary mascot, TRIGGER-chan, one of three bodacious characters known as the TRIGGER Girls. Having originated as an April fool’s joke, TRIGGER called on illustrator Mago to design the mascots, who later did the character designs for Space Patrol Luluco as well.

The many references in Space Patrol Luluco 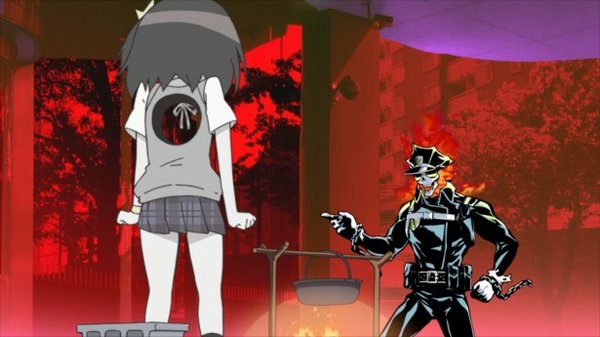 The first of four parts, labeled as “seasons’ ‘, covers the introduction of Luluco into the Space Patrol and the arrival of her crush Alpha Omega Nova. The second season takes a turn when Ogikubo comes under threat from outside forces.

The third season is when the series really heats up with the Space Patrol visiting several different “Okigubos” all of which comprise of different TRIGGER properties, notably Kill la Kill, Litte Witch Academia, Sex & Violence at Machspeed, and Inferno Cop.

The final season then sets out to conclude the story as you might expect.

The characters in Space Patrol Luluco are certainly not hard to tell apart from each other. With each one having a distinct look and personality, they’re all memorable no matter the screen time. Here are some of the standouts. 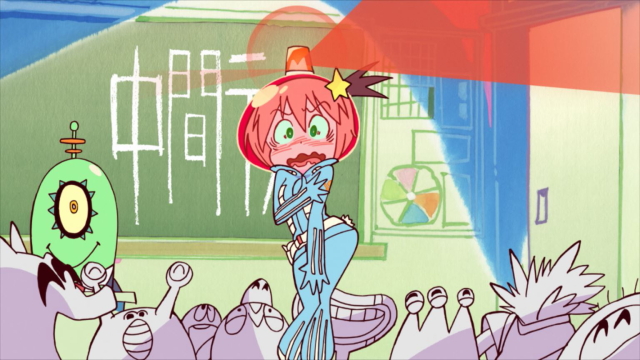 The star of the show, Luluco is a highschool girl trying to live a regular highschool life. Due to the unfortunate circumstances with her father leading to her conscription into Space Patrol, her dream of having a normal life slip further and further away. The only thing that makes any of it bearable is her crush on her mysterious coworker and newcomer Alpha Omega Nova. 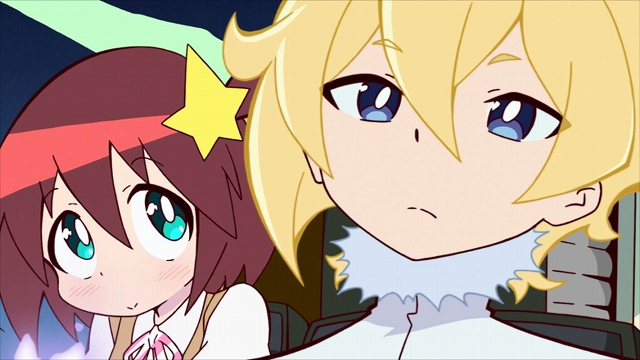 As the most apathetic member of the space patrol, the handsome young Alpha Omega Nova doesn’t let anything phase him. Crash landing into Luluco’s classroom one afternoon, he always goes with the flow. 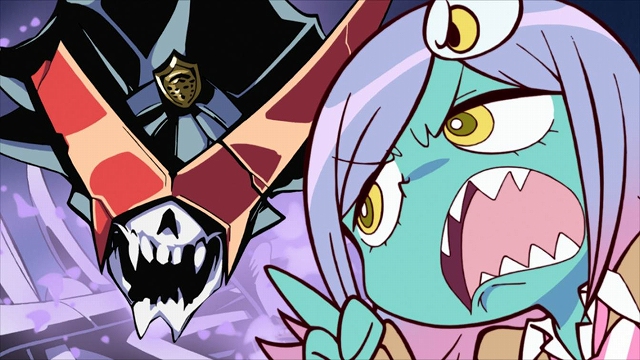 A fairly suspicious three-eyed green schoolmate of Luluco’s, Midori is the most questionable of the Space Patrol members. Allegedly leaving behind a life of crime, she joins the Space Patrol to avoid persecution. 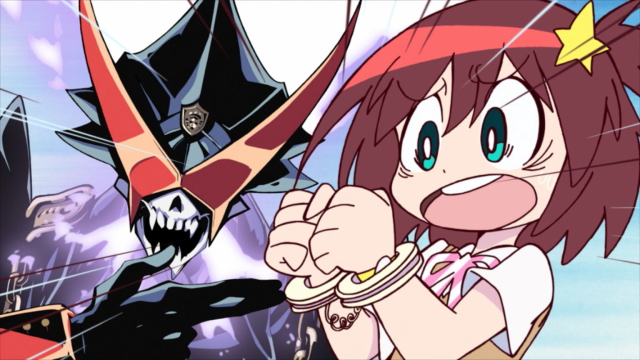 There is one thing you should know about the bot-blooded cut-out flame-skulled police officer that is Chief Over Justice and that is that he bears no relationship to Inferno Cop.

Over Justice is his own distinct person with albeit similar justice-field motives to his skeletal counterpart. As Keiji’s boss, he recruits Luluco to the Space Patrol in order to repay the remaining debt that Keiji incurred. 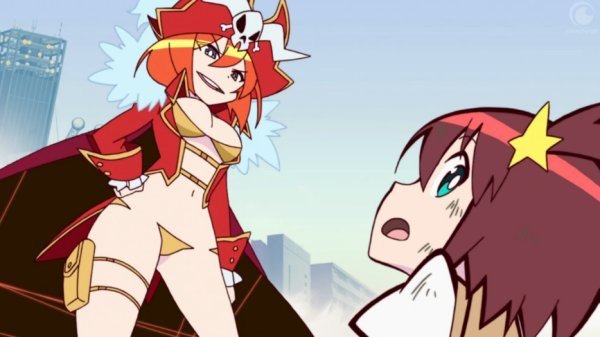 Lalaco is Luluco’s estranged space-pirate mother who has very little personality overlap with the rest of the family. Choosing to live life as an order-less criminal, she despises the bootlicking nature of the Space Patrol and is disappointed in her daughter’s pursuit to live a normal life. 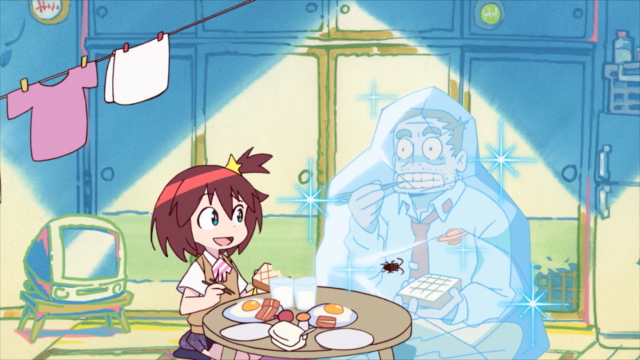 Luluco’s father is an upbeat, friendly, pure-hearted member of the Space Patrol who just wants to maintain justice. However, due to going into cryosleep, his fate is in the hands of the disorganized Space Patrol.

Will there ever be a season 2 of Space Patrol Luluco?

While TRIGGER would love to revisit Luluco among their other old properties, there currently are no plans to create a sequel to Space Patrol Luluco in any capacity.

If you’re looking for something to capture the quintessential TRIGGER experience, Promare revisits a lot of story beats and ideas from the previous TRIGGER and Team Imaishi works without being so heavy on direct references.

If you just want some dumb fun and haven’t seen Inferno Cop yet, you should make it the next thing you do.