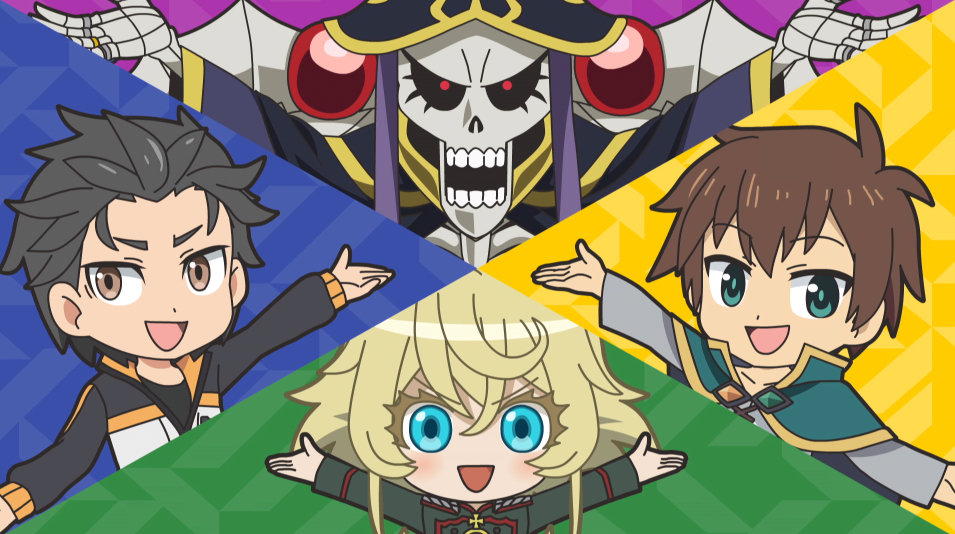 Here at OTAQUEST, the staff tends to prefer certain types of series. We have people who like action and adventure shonen anime, and others who like theirs to be especially fun or even thought-provoking. No matter what you like, however, there is a telltale sign that a series has become really popular: the anime company produces a spin-off gag series!

Just to clarify, I’m not talking about remakes, reboots, or sequel series. Technically, Boruto is a spin-off, but it’s pretty much Naruto: The Next Generation. I’m also not talking about side stories, such as the Woman Named Fujiko Mine.

No, I’m talking specifically about silly, funny, and comical gag anime spin-offs series that usually have nothing to do with the canon of their franchise.

These series are usually short; a typical episode will be only about three minutes long. The characters themselves are also ‘short.’ They are usually drawn in a cute, cartoony, chibi or ‘super-deformed’ style. A spin-off gag anime may parody the characters and the plot of the main show. It may place them into unusual situations, or place fantasy characters into normal, mundane situations.

As you can see, there are a lot of these things. And those are just the ones which are not exclusively available at Funimation or some other streaming service. Some spin-offs were only available as bonus DVD featurettes or other similar promotional items. For example, the .hack//GIFT OVA was only made available to people who bought the .hack games.

Why Watch a Gag Anime?

The gag spin-offs that I’ve seen are pretty good. You can tell that the creators and the voice actors are having a good time making fun of themselves.

For example, The Melancholy of Suzumiya Haruhi-chan takes Haruhi’s bossy, imaginative genki girl attributes and cranks them to eleven. It’s still Aya Hirano, although it sometimes reminds me of when Konata was cosplaying as Haruhi in Lucky Star.

This idea of ‘turning an adventure series into a school comedy’ is also used in Attack on Titan: Junior High, and Tales of Demon Slayer Academy. It mixes together two popular genres, allowing them to make fun of both at the same time.

However, Isekai Quartet adds another layer: the characters are fully aware that they’ve been railroaded into a weird and strange school setting, and a few times they try to rebel against the system.

If the setting isn’t different from usual, the characters themselves sometimes are. Yuki Nagato wasn’t a video game nerd until Haruhi-chan, although it is very fitting that she would be. The Rock Lee spin-off to Naruto has Negi cross-dress way more often than you would expect.

In my experience, spin-off series can also be a decent introduction to shows that you’re not immediately familiar with. Maybe you’ve heard of a series, but you’re not ready to commit to hours of plot development and story arcs.

In the case of Umayon, the spin-off to Umamusume: Pretty Derby, I ran across the spin-off before I knew anything about the main series. Umayon undoubtedly had some inside jokes for people who were already familiar with the series. Indeed, giving dedicated fans a little extra something to enjoy is a big part of the reason why spin-off gag series exist and they will often show up between seasons, while fans are waiting for the real thing to return. However, the jokes in Umayon are funny without knowing anything about the racehorse girl characters.

Finally, it’s good to remember that these shows are short. Short is not a bad thing. Teekyu is short, and it’s downright hilarious. Ninja Girl & Samurai Master is a funny, historical short series.

Short comedy series are great for when you just need a little humor in your life, and if you’re reading this in 2020, you probably could use a few laughs. They’re also good for when you don’t have a lot of time, or maybe you just don’t feel like watching a half-hour or more anime episode full of plot and exposition. You can binge watch a short series in the time it takes for most shonen battles to finish.

If you find that you don’t like one, you’ve only wasted about three minutes of your time.

Not all spin-off gag anime series are great, but that’s true of any genre, isn’t it? If you like funny stuff, spin-offs are worth considering.