So far, the Weekly Big Comic Spirits 40th anniversary has been an excellent celebration of the legendary seinen magazine’s unique history. Not only has a commemorative website been opened, but also an essay competition, special exhibition, and virtual tour. What’s next? As it turns out, something fairly normal: a manga competition with a serialization in the magazine and prize money up for grabs.

Announced on November 9, the Spirits 40th-anniversary manga competition doesn’t appear to be anything radically different to what the magazine has run before. In fact, the publication runs some sort of rookie prize every month, albeit with different prizes and different judges. So, what’s the deal?

The answer might come from looking at the panel of judges. Although normal competitions tend to be judged by a handful of authors and someone from the editorial department (last month’s was judged by Inio Asano, Yasuo Ohtagaki, and editor-in-chief Kikuchi) this month’s Spirits 40th manga competition gathers five well-known industry figures around the table. They are: 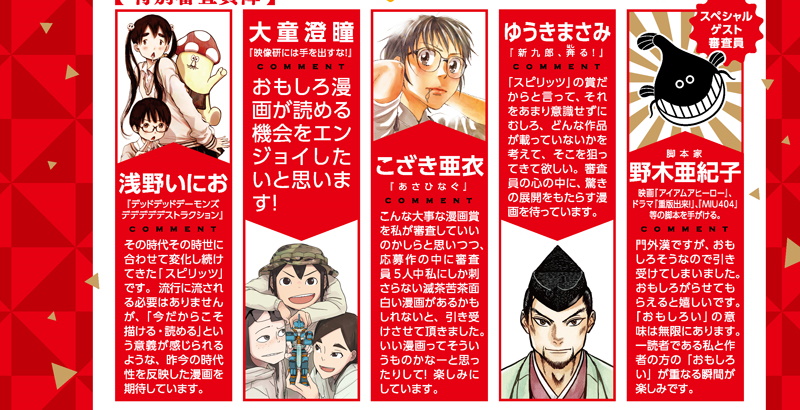 All of these creators have either been serialized in Weekly Big Comic Spirits or at least involved with the magazine in some shape or form in the past. The point of this Spirits 40th anniversary manga competition, then, appears to be to roll out the big guns and encourage people to apply with star power.

Shogakukan is also taking it very seriously. Not only is the winner promised a massive amount of prize money at 2 million yen (about $18,950 USD), they will also “definitely” get a serialization in the magazine sometime in the future.

As a result, the entry requirements for this competition are also quite serious. You need to submit storyboards for two chapters, as well as five manuscript pages with fully completed art. Nevertheless, if you ever wanted to be seriously considered for a serialization in Weekly Big Comic Spirits, then this 40th-anniversary manga competition is the chance to do so.