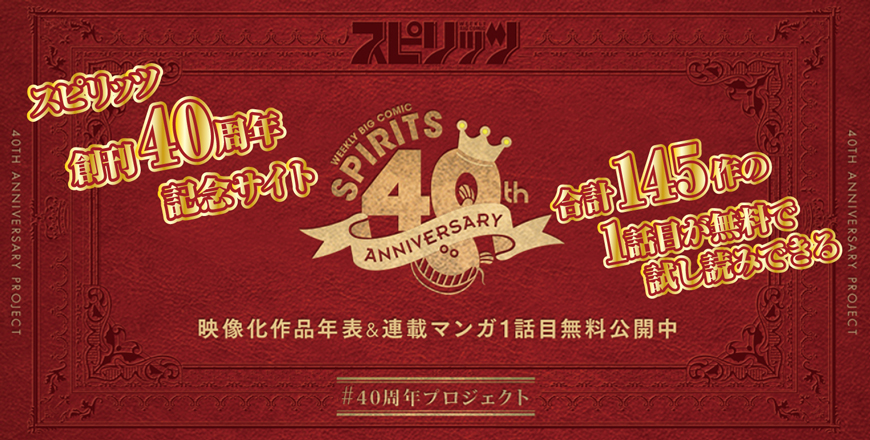 Weekly Big Comic Spirits is celebrating its 40th anniversary this October, which is a cause for celebration for the whole of Shogakukan’s seinen line-up. Since 1980, the magazine and its sister publications have been a vehicle for some of the most popular and genre-defining series in the seinen demographic, from 20th Century Boys to Keep Your Hands Off Eizouken!. A new website, launched on Monday to celebrate this anniversary, shows off this unique and varied history.

The Spirits 40th anniversary website mainly focuses on those series that are either currently in serialization (such as Asadora! and Dead Dead Demon’s Dededede Destruction) or have been adapted in some form or another, whether it be a live-action movie or anime series. These series represent the ‘crème de la crème’ of the magazine’s output over the years, although you can find a full list of series that have run in the magazine over the years by clicking on the menu tab.

There are two main sections to the website, those being ‘History’ and ‘Dictionary.’ In the former, you can explore all of the most important series that have run in the magazine since its debut, discover information and synopses, as well as give their first chapter a go. Such greats as 20th Century Boys and Uzumaki are, of course, featured.

In the ‘Dictionary’ section, the Spirits 40th anniversary website lists its series in alphabetical order, by their first sound in the Japanese syllabary. Here, again, you can discover information about series that have run in the magazine as well as try out their first chapter, but the same also goes for series that are currently running in the magazine. There are over 140 series that you can check out, so use this resource well.

The celebration for Spirits’ 40th anniversary has also spilled over into the magazine itself, with this week’s issue 20 supposedly marking the ‘start’ of the momentous year. Keep Your Hands Off Eizouken!, which is by far the magazine’s hottest property right now, is leading the charge with a series of four consecutive issues that feature the members of Nogizaka46 who are starring in the Eizouken live-action TV drama and movie on the front cover. This week’s issue, in turn, focuses on Yamashita Mizuki (who plays the role of Tsubame), and even comes with a special sleeve cover that you can use to transform your Eizouken volume if you so wish.

All in all, Spirits have gotten their 40th anniversary off to a flying start in a way that celebrates their unique and varied history as a seinen publication. More content is apparently on the way, so keep an eye on the official website for more information.