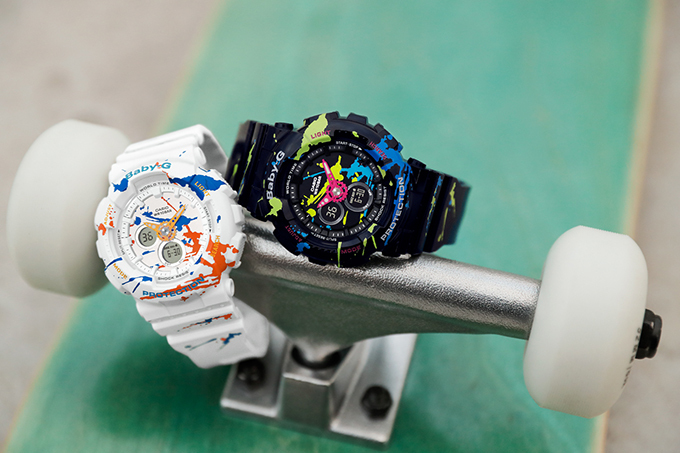 If you’re a fan of Nintendo’s third-person shooter Splatoon, then you’ll want to listen up, as Japanese watchmaker Casio announces it will soon be adding a brand-new series of watches to its Baby-G lineup. Adding a splash of color to our wardrobe this May, the Splatoon Pattern Series watches will be seeing a Japanese release in May 2017. This aligns itself just before the highly-anticipated June 21 release date of Nintendo Switch exclusive Splatoon 2.

Almost as if these watches had been discovered deep within the trenches of an ongoing turf war, both the band and watch face are coated in a haphazard pattern of vividly-colored ink. The white model goes on to represent the blue and orange teams, while the black model sports the neon-colored scars of a blue and green throwdown. Both models in the series will set you back roughly ¥18,500. It’s yet to be revealed just what day in May the pair will be released, as well as where you’ll be able to pick them up.

The street art motifs and the ultra-trendy in-game fashion scene are an inseparable aspect of Splatoon; pulling large amounts of inspiration from the real world Japanese street fashion scene. While the game has seen some pretty modest success globally, it’s become something of a phenomenon in its homeland Japan. In May of last year, it was reported that 45% of all total Wii U owners in Japan had owned the game, and it’s likely that number has only increased since then. So while I can’t say with 100% certainty that Splatoon’s impeccable sense of style was the sole factor in its massive success, it does seem pretty safe to assume that young people still crave an outlet of self-expression, whether that place is online or offline.

I’m in love with these watches, and I hope that Splatoon continues to make a splash across Japan’s video game and pop-culture. You can check out some close-ups of the watches below:

Radio Eva Teams Up With Casio For Evangelion Themed G-Shock