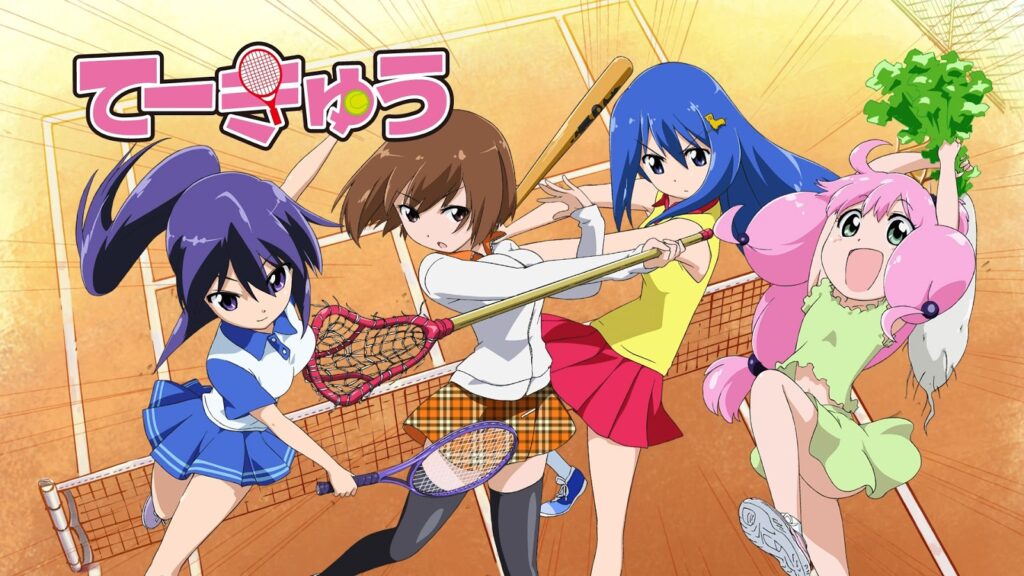 Teekyu is an anime and manga series about a high school girls tennis club.

Of course, that’s like saying that Weird Al Yankovic is a musician.  It is a perfectly legitimate description of the series — they are indeed high school girls, and they do apparently constitute their school’s entire girls tennis club.

Not a Sports Anime

The thing is, the characters of Teekyu (or Teekyuu) don’t play any actual tennis.  They don’t “not play tennis” in the same sense that the girls from K-On! goof off and avoid playing guitar, because K-On! eventually does get around to some amazing concert performances.

These girls simply don’t play tennis. The few times that we do see them play or practice on the court, most of the team players leave you with the impression that they have never played tennis before.

And thank goodness for that.  Teekyu is a gag anime series, full of puns, parodies, physical humor, and weirdness.  Even the name Teekyu is a pun on the Japanese word for tennis, teikyu. The school tennis club is simply a device for the characters to hang jokes onto.

If the girls actually played tennis well, or if they attempted to win the championship like you would expect in a normal sports anime series, it would ruin the fun of this extremely random and silly series.

In one episode, they do try to be a serious sports anime series — they do all of the usual sports training stuff. At the end of the episode, one of the girls breaks the fourth wall (this happens a lot) to comment on how boring this is. That’s not what Teekyu is all about.

They hang out, they go to the beach or the pool, they go on trips and training camps. They attempt cooking, they go skiing, they go to festivals and celebrate holidays. They get abducted by aliens — no, seriously, aliens show up surprisingly often in this series.

With a couple of exceptions, there’s usually little to no continuity. Of course, running gags return, but nobody ever graduates. There are no rivalries, no challengers, or champions — a rival school does eventually show up, but they don’t have an effect on the show’s focus at all; there are no real crises to solve.

No matter what happens, things (usually) return back to “normal” by the next episode. 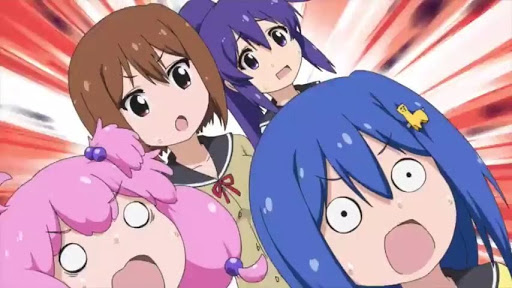 Each episode is only about two minutes long — and that typically includes the opening theme.  A lot of fast-moving jokes and humor get squeezed into those two minutes. If there is a point to the episode, they somehow manage to resolve it in two minutes.

The girls do talk a bit quickly, but that’s not the key to the success of the series.  Instead, the series relies on lightning-fast punchlines — if you blink, you might miss something.  There’s a quick set-up, a fast joke, then a lightning-fast reaction. (Often the wild reaction is funnier than the joke.)

If the gag doesn’t quite make sense, that’s OK. They’ve already moved on to the next joke before your brain has had a chance to analyze what just happened.

Of course, it’s not quite as entirely random as it might sound. Most episodes will have a specific theme to it. Quite a few times, several smaller gags will lead to a big payoff at the end.

On the few occasions when they do play tennis, they also make fun of more serious shonen anime. There are secret techniques (which don’t help), intense (if pointless) training, and ridiculously powerful tennis shots (often aimed at the opponent’s stomach).

Is There a Plot?

While Teekyu tends to be very random in general, the first couple of episodes do establish a few rules for the series.

The first character introduced is Yuri Oshimoto, a freshman with purple hair.  She often appears to actually know what she’s doing, and she tends to be the straight man in a club full of loonies.

Note that straight man is not the same thing as smarter, more logical, or better than the rest; she is just more likely to notice when plots get derailed by non-sequiturs.

In the first episode, Yuri attempts to play tennis against Kanae Shinjo; this is one of the few times that tennis actually features heavily in the plot.

Kanae is a short, pink-haired girl. Her tennis style involves a lot of over-the-top martial arts moves. Of the four main characters, she seems to be the most cartoonish and most likely to introduce random, unusual items into a scene. She also tends to misunderstand stuff for the sake of a pun.

Nasuno Takamiya is a parody of the typical token rich girl.  She’s impossibly rich, and her family is ridiculously powerful. She can get her hands on helicopters or just about anything the plot requires.

The fourth member of the club is the blue-haired girl, Marimo Bando. She’s often something of a mental space cadet, with her own unique, airheaded ideas about the world.

When an alien girl shows up, Marimo is the first one to meet her. This cute alien girl is named Tomarin and she ends up living with her. With her alien outlook, she’s possibly the only person anywhere who thinks the same way that Marimo does.

Teekyu started out as a comedy manga by Roots and Piyo.  It ran from February 2012 to January 2018 in Comic Earth Star, a manga magazine by Earth Star Entertainment.

The manga Teekyuu is very bit as silly as the anime, and some of the same jokes are in both.  But it doesn’t have the frantic, hyperactive pace of the anime.

The manga was adapted into an anime in October of 2012.  The anime ran from 2012 to 2017.   The first three seasons were animated by MAPPA (Maruyama Animation Produce Project Association); starting with the fourth season, a relatively new studio, Millepensee, took over. The series was directed by Shin Itagaki.

The anime adaptation contains 108 episodes in nine seasons. Each season has its own theme song, which is typically energetic, peppy and happy.

A couple of spin-offs were also created. Takamiya Nasuno Desu! focuses on the rich girl Nasuno, and her adventures away from the tennis club.  It started out as a manga in 2014, and an anime was created in 2015.

This anime is just as silly as the original series. In the original, Nasuno is sort of a wasted character, as she can’t compete with either Kanae’s or Marimo’s weirdness.  Here, she gets to be the weird one.

In the spin-off, Yuri’s brother, Yota, becomes Nasuno’s butler.  Much like his sister, he also serves as a straight man, who reacts to all of Nasuno’s crazy antics. The rest of the Teekyu girls also make cameos.

Each episode is two minutes long.  There are 12 episodes, plus an OVA.   The series ran concurrently with the fourth season of Teekyu.

Another spin-off was Usakame.  Usakame features a different tennis club, from the rival high school Usakame. The name comes from usagi (rabbit) and kame (turtle).

The action is a little bit slower than with Teekyu.  It’s still a silly series, but it’s less gag-oriented.  The artwork also looks softer, which reflects the less cartoonish feel to the series. The characters actually seem to care about tennis, and they care about each other.

The characters are voiced by members of Earth Star Dream, which performed the theme song for the sixth season of Teekyu.

The episodes are four minutes long. There are 12 episodes.

There was also a live-action stage play based on Teekyu.    The play, which came out in 2015, was called Butai-ban Teekyu Senpai to Meguriau Jikantachi, or Stage Play Edition Teekyu: Senior Students and the Times to Come Across.  (If we follow the translation style used by Crunchyroll for episodes, it would be Teekyu: The Times to Come Across with Senpai.)

PlayAsia currently has a Teekyu Blu-ray special box set.  The website doesn’t provide much information, but apparently, the box set comes with a 160-page book. The art shown looks the same as the box art in a 2017 Crunchyroll article about the release of a Japanese box set.

Assuming that they are talking about the same thing, the “complete series” box includes audio dramas and “a massive storyboard art booklet.”  Note that “complete series” refers to the eight seasons which existed at the beginning of 2017; a ninth season arrived later that year.

Amazon also has a Teekyu Blu-ray for Region A/1 (which includes both North America and Japan).  It’s in Japanese and it’s only one disc.  Once again, details are skimpy. Given the short length of each episode, it’s not clear how many episodes or which ones are included.