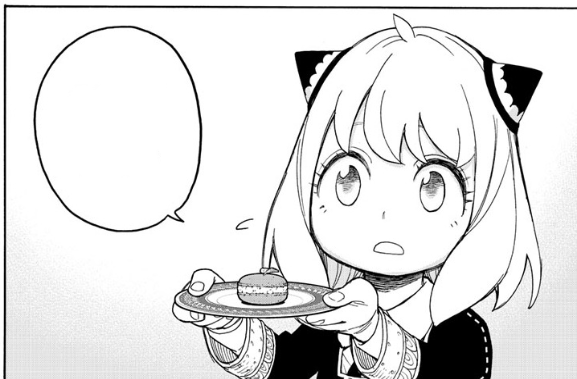 The beginning of a new week can only mean one thing: time for new Weekly Shonen Jump! This is where Jacob investigates the latest and greatest in the magazine, telling you what’s worth your time and what’s not. You can find coverage of other series under the tag Jump Time. Here’s SPY x FAMILY chapter 51.

Anya Forger is a pretty dumb six-year-old girl just barely keeping afloat in the prestigious Eden Academy, so it stands to reason that she’d jump at the chance to devour a legendary pastry that’s said to make you instantly smarter. Antics ensue, but SPY x FAMILY chapter 42 also might contain some hints as to what the story might have in store for us in the future.

The journey to obtain the final ‘special Pierre Pommier macaron’ set is one that’s filled with enough gags and set-up to warrant its own piece, but it is the game of Old Maid that SPY x FAMILY chapter 42 really revolves around that needs to be talked about. Tatsuya Endo’s talent for engineering unique situations around the concept of ‘hidden identities’ really comes to the fore here once again, as Anya unwittingly uses her mind-reading powers to wipe the floor with her classmates in the opening rounds. She’s then forced to backtrack, lest she reveal her true identity as a ‘tellypath’ in the quest for the final macaron. 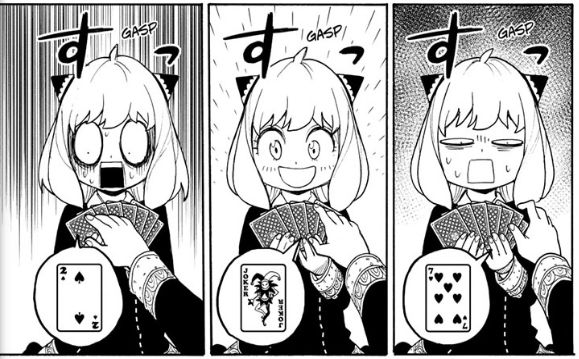 Of course, all of this is made even more hilarious by Endo’s masterful command of his character designs, and most especially his characters’ expressions: probably the biggest laugh of SPY x FAMILY chapter 42 comes when we take Damian’s perspective for a second, seeing just how easy Anya is to read in the card game. Still, he can’t help but get guilt-tripped at the very end, when Anya starts to cry at the thought of being separated from her classmates.

In what specific form the Damian/Anya relationship will develop in the future remains to be seen, but there’s plenty more aspects of SPY x FAMILY chapter 42 that give a more definitive hint as to what might happen in the near future. First of all, this chapter introduces the concept of splitting the classes by academic ability: even though Anya wins the legendary macaron at the end and gets fired up, she still flunks the Classical Language test. The threat of being seperated from her friends still hangs, therefore, over her head, prompting speculation as to what this might mean for Twilight’s mission. 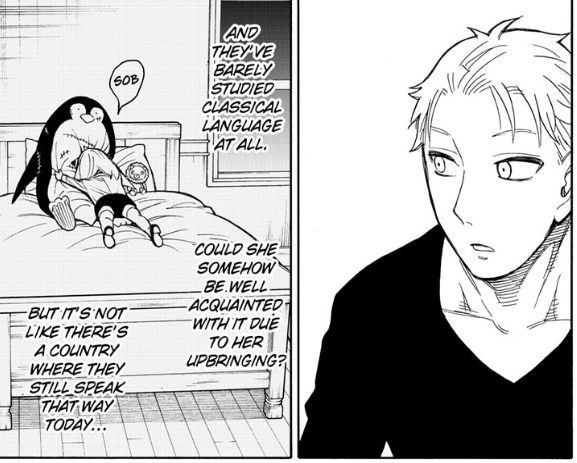 Speaking of Twilight, his observation at the very end that ‘if she hadn’t lost so many points for spelling mistakes, she actually would’ve done quite well’ leads him to ponder whether or not she might be acquainted with Classical Language (Latin or Greek, presumably) from her ‘upbringing.’ Anya’s past as a runaway test subject from an underground experiment that gave her mind-reading powers in the first place hasn’t really been dwelt on in the story up until this point, so I wonder if this is our first hint that an ‘Anya’s past’ arc might be on the cards sometime soon.

With this in mind, SPY x FAMILY chapter 42 isn’t just a chapter full of funny gags: it also might end up being quite an important juncture in the story, if several implications are properly followed up on.

It is also very funny, mind.

You can read SPY x FAMILY chapter 42 for free via VIZ Media.