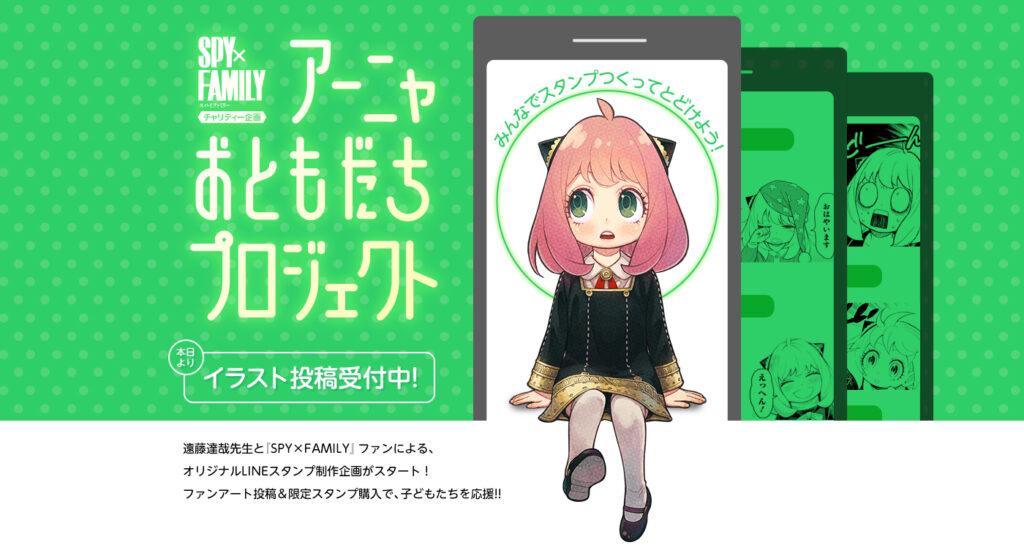 When any piece of media gets popular in Japan, it’s only a matter of time before it finds itself transformed into a set of stamps for LINE. As the country’s most popular messaging service, LINE is used everywhere and by everyone, meaning that it provides a ready source of income for any company willing to take advantage of it. Considering SPY x FAMILY’s massive success, it’s almost a surprise to see how long it took before getting the LINE stamp treatment. The way it is going about it, however, is a little unusual.

Under the title ‘Anya Otomodachi Project’ (Anya Friend Project), SPY x FAMILY is asking fans to send in their own illustrations of Anya for seven different ‘themes,’ pictured below. Each one of these themes comes with an example from Tatsuya Endo’s original manga, which hopeful applicants are encouraged to use as inspiration for their creations. 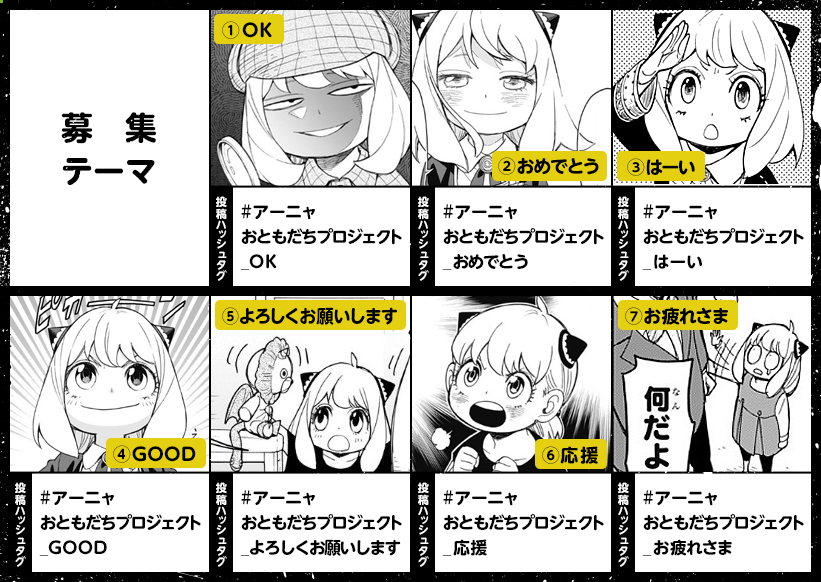 Naturally, the question begs itself: what’s the point in getting fans to do the donkey work when any one of Tatsuya Endo’s excellent illustrations could be used to make some LINE stamps? The answer lies in where the money goes: according to the official homepage, any proceeds will be donated to the Ashinaga Foundation, a nonprofit organization that supports children who have lost one or both of their guardians.

Jump Plus editor Shihei Lin also says that inspiration came from a line spoken by Anya in the second volume, where she said that her life had become much more exciting since she was adopted by Loid. SPY x FAMILY and Shueisha therefore want to use these LINE stamps to give other children the same opportunity.

It’s not as if the artists who have their Anya illustrations selected for these SPY x FAMILY LINE stamps will go unrewarded either: although they won’t receive any money, they will receive a sign board from series author Tatsuya Endo. Endo will also be submitting an illustration alongside the seven outlined above, making for a total of eight stamps.

Consider supporting a good cause when these SPY x FAMILY LINE stamps come out in mid-February for a limited time. The winners will be announced on 12 February, and entries are open now until 28 January. Just follow the official Jump Plus Twitter and submit your illustration with the appropriate theme hashtag.