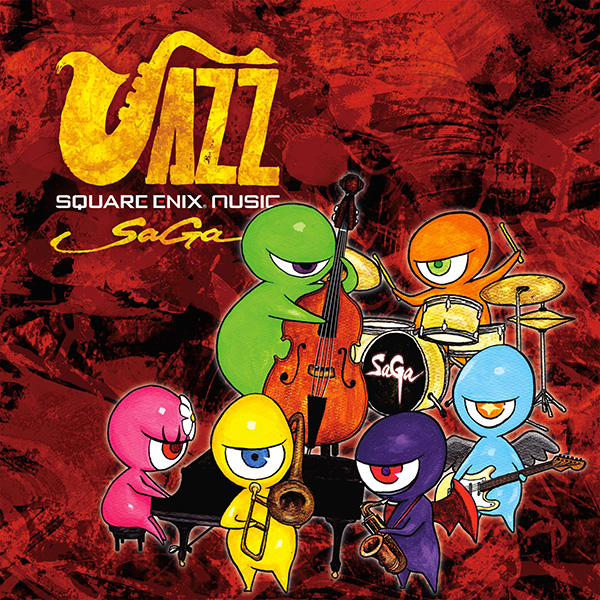 The latest Square Enix jazz album will feature music from the SaGa series. Square Enix games tend to have great music, thanks to composers such as Nobuo Uematsu. And three times already, Square Enix has turned some of this amazing music into jazz. The fourth of these jazz albums, Square Enix Jazz -SaGa-, will come out on 17 March 2021.

The album will have twelve songs on its tracklist, representing quite a few of the games in the SaGa franchise. Japanese jazz musicians Eijiro Nakagawa and Ryu Kawamura created the jazz arrangements of these video game songs. Trombonist Nakagawa has added trumpet and trombone music to Inuyasha, Lupin III vs. Detective Conan: The Movie, .hack//Legend of the Twilight, and other anime series. Kawamura is a bassist, composer, and arranger.

The album cover is by painter/ designer/ illustrator Novol.

The Games and the Music

The Final Fantasy Legend, known in Japan as Makai Toushi SaGa (or Warrior in the Tower of the Demon World SaGa), is the first game in the SaGa series. As you can tell from the Japanese title, the Game Boy game isn’t directly related to Final Fantasy. However, it did feature a soundtrack composed by Uematsu.

Uematsu and Kenji Ito composed music for the sequel, which is included in the second track, ‘At the End of the Decisive Battle’ from The Final Fantasy Legend II. Ito would go on to create music for Romancing SaGa and its sequels. Several songs from these are included on the album. He also did music for SaGa Frontier, Imperial SaGa, and SaGa: Scarlet Grace.

The third one concentrated on Final Fantasy VII, which had not been included in the first two albums. So, if you want to hear a jazz arrangement of ‘One-Winged Angel’, you want to get this one.

If you pre-order Square Enix Jazz -SaGa- through the Square Enix e-Store by 17 February, you will receive an extra, limited-edition DLC song not included in the album.