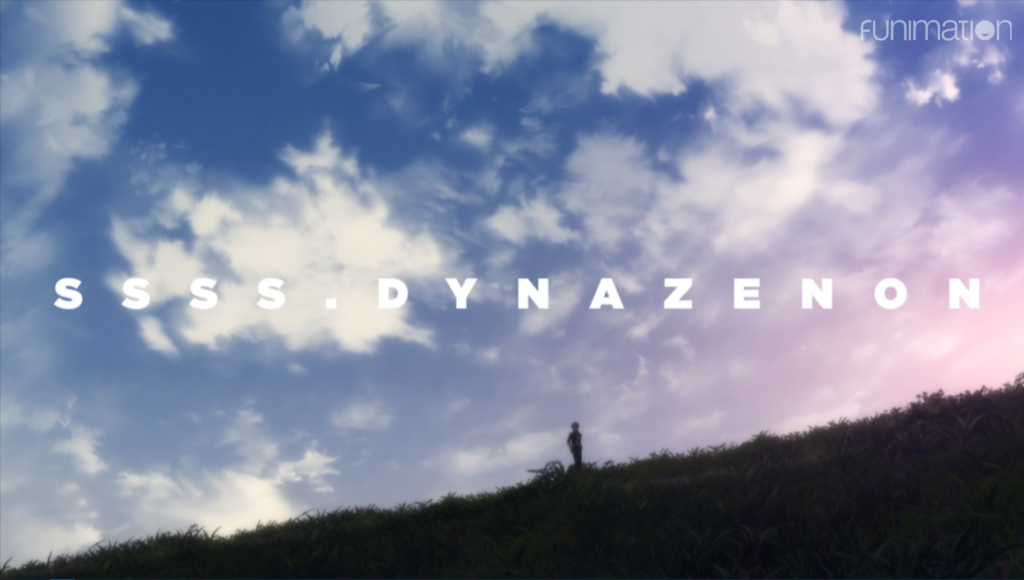 For more than a whole year now, fans (you, me, everybody) were eagerly awaiting the debut of TRIGGER‘s SSSS.DYNAZENON: a new anime series in the Gridman universe that is more of a spiritual successor than a direct sequel to the surprise 2018 hit. Details about SSSS.DYNAZENON only slowly trickled out, and at times we had to read and re-read our own news reporting to make sure we didn’t dream the production up ourselves.

Fast-forward to April 2021 and we finally have our SSSS.DYNAZENON Episode 1. Also helmed by SSSS.GRIDMAN’s Akira Amemiya, and a largely returning key staff, there were high hopes that DYNAZENON would be a worthy follow-up to the ‘b-team TRIGGER anime’ turned mainline through the strength of its own will.

However, we’re more than pleased to report that Episode 1 points the series in the right direction.

Budding blue-haired high school student Yomogi Asanaka (not directly pictured in this article) saves Gauma’s life (directly pictured above) by offering him a yakisoba bread (because Japan) when they find him starving under a bridge. Being a mysterious yet hot-headed weirdo, Gauma freaks Yomogi out by manically exclaiming ‘you saved my life’ and ‘I’ll return the favor’, resulting in the unpictured Yomogi promptly running off.

A bit later that day a student named Yune, who in her own words admits ‘something’s wrong with me’, directly pictured below, asks Yomogi to meet up with her later that night only to ditch. This makes the Kamina-esque Gauma furious and sets off to retrieve Yume, but not before giving him a piece of his dumb-but-good-hearted mind. A Kaiju then appears out of nowhere, with Gauma inexplicably summoning the titular SSSS.DYNAZENON of SSSS.DYNAZENON Episode 1, which ends up with him, both high schoolers, and one seemingly-Hikkikomori bystander all sharing a cockpit.

SSSS.DYNAZENON Episode 1 carries the subtitle ‘What is a Kaiju User’, and by the end of the episode, we all still have no idea. Gauma only says the word ‘Kaiju’ twice, once during his fumbled introduction to Yomogi and again towards the end, gasping ‘I can’t control this Kaiju’. Instead of getting right down into the big monster and big robot nitty-gritty, the episode takes its time spinning a web of character introductions and more specifically introducing their hang-ups.

You wouldn’t want that for Godzilla Vs. Kong, unfortunately, produced by Hollywood and not TOHO, but director Akira Amemiya hits these uncomfortable cast nuances perfectly in DYNAZENON. Yomogi crumbles what must have been the equivalent of several hundred dollars he received from his mother’s partner into some donation box, despite the opening having him saying that he needs more spending money. We learn through successful exposition that Yume’s sister Kano died sometime before the start of the series, and that she has a habit of intentionally standing boys up. Gauma, while awkward, does seem to be a Jump-protagonist type-idiot with his heart on his sleeve.

TRIGGER productions usually come packaged with charismatic and fun character animation, but SSSS.DYNAZENON Episode 1 paints particularly gorgeous scenes all around. The detailed backgrounds breathe a sense of place into the small, residential area the show takes place in and once again Masaru Sakamoto’s character designs feel so fresh and move quite nicely too.

In short, just about every shot in the episode rocks.

Though Evangelion’s Shiro Sagisu is credited for the soundtrack, the first episode used very little music, which helped build its intentionally simultaneous cozy yet uneasy atmosphere that successfully imparting weight onto the show.

Another factor giving DYNAZENON some meat is the voice acting: SSSS.GRIDMAN featured very Not-Anime and more realistic dialogue, and DYNAZENON keeps up that tradition to great effect. Despite not knowing much about them yet, the acting and animation alone make the viewer sympathetic to Yomogi and Yume’s problems. Oh, the robot stuff, at least the hand-drawn segments, looks cool too 😉

SSSS.GRIDMAN didn’t become a word-of-mouth success because fans loved its tokusatsu tributes. The tokusatsu element was used to develop a unique setting and series of situations for what ended up turning into a psychological study of Akane. This show seems to portend utilizing more of its ensemble cast, but SSSS.DYNAZENON Episode 1 already more than hints we’re getting additional heaps of post-Gainax character drama and introspection.

Ultimately, the particular Kaiju dressing and how it’ll fit into the so-called ‘Gridman Universe’, should be secondary to the actual human story it wants to tell. Thankfully, we’re off to a good start.

You can watch SSSS.DYNAZENON Episode 1 on Funimation.