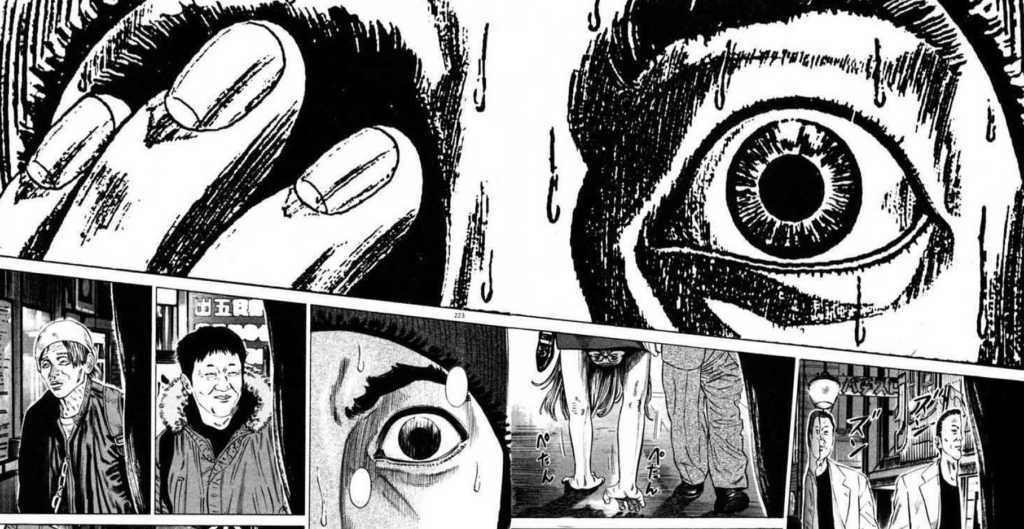 The relationship between manga and anime in the western world is inverse to what it is in Japan. Here, manga is the much more prominent medium, playing its part in daily life for 10s of millions of citizens. Anime’s largely seen as the derivative art and sub-culture, literally so with the majority of popular anime coming from manga. It’s not like western fans don’t know anime like My Hero Academia or Demon Slayer were manga series first and undeniably millions of us read manga. However, manga has yet to largely form its own identity outside of anime stateside and, because of that, the number of series that are officially translated and released is quite limited. While you can’t expect the tens of thousands of manga that exist to all get released, sometimes even seminal works or incredible creators get left on the shelf. The idiosyncratic and ambitious if not perverse Hideo Yamamoto is one such mangaka. 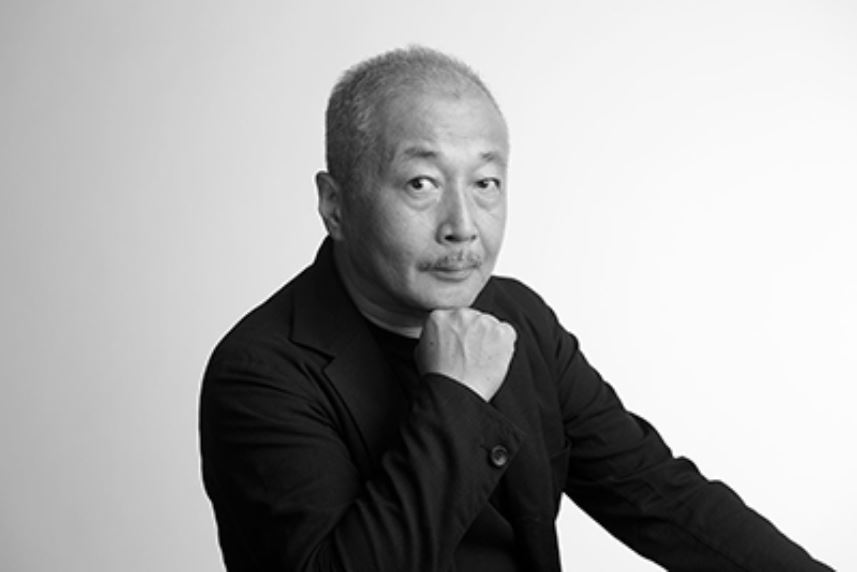 Born in Saitama in 1968, Hideo Yamamoto has quietly built a career of crafting works that veer into the deep recesses of our thinking. Crossing into sexual taboos, utilizing a self-aware glorification of violence, and delving into meditations of what living really is, Yamato’s cultivated a particular niche for himself that’s not for everyone. One person it did appeal to though was the prolific and often grotesque Japanese director Takashi Miike whose best-known film among foreign fans to this day is Ichi The Killer. What you might not know about that ultraviolent Yakuza romp is that it was based off a manga; Koroshiya Ichi or ‘Ichi The Killer’ by Hideo Yamamoto. TEven now that manga hasn’t received an English release despite how beloved the film is, surprising considering American fans did at least get the original Oldboy manga by dark horse nearly 20 years back. 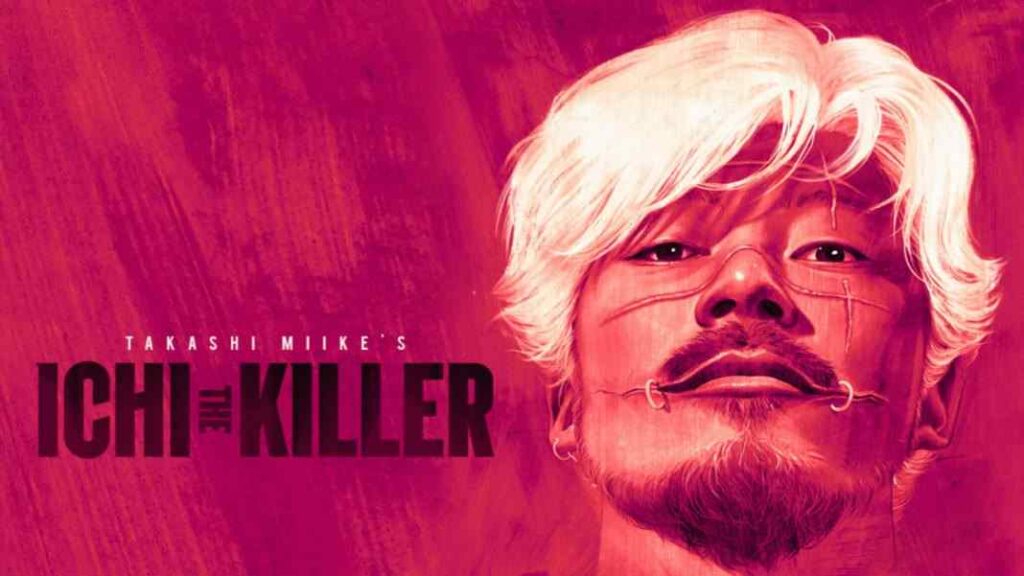 Both Miike’s Ichi The Killer film and Yamamoto’s Koroshiya Ichi manga follow the same basic premise; A mentally unsound crybaby assassin Ichi who doesn’t really want to kill squares off with a sadistic rival Japanese mob boss Kakihara who revels in inflicting pain. Opposite of what usually happens in live-action adaptations, the film opts to up the violence and almost presents Kakihara as the main character, at least in the same way The Joker is the star of The Dark Knight despite it being a Batman film. Miike’s version doesn’t dump the psychological angle of the manga, it wouldn’t be such a classic if it was just Hostel style gore-porn after all. However whereas Takashi Miike excels at depicting over the top madness with some semblance of weight and meaning, Yamamoto’s realm is the psychology behind it. 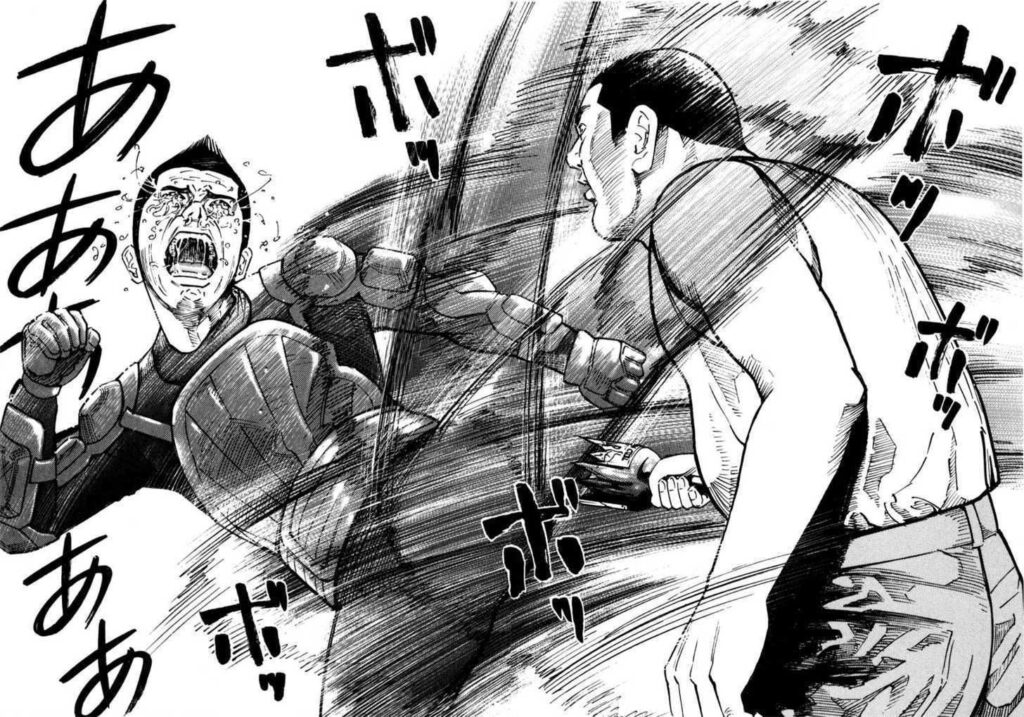 An assassin who blubbers and screams as he mercilessly kills his victims with tears bursting through his eyes like a busted can of coke; That’s Ichi, the ingenious and tortured creation of Hideo Yamamoto. While Kakihara’s twisted smirks and carved up face also tell an interesting story, there’s just something so helpless and pitiful about Ichi despite the fact that’s he’s incredibly strong. A death dealing perverted One Punch Man, who does in fact get aroused when in his element. In Koroshiya Ichi, Yamamoto stares into the intersections between pain and pleasure, violence and sexuality, without offering any answers. It certainly doesn’t read like pornography though as the author clearly is trying to intimate that these dark and exaggerated characters were sprung from some kernel of truth. It’s no more violent than a Berserk or Gantz, which both also are much more than bloodfests, but maybe its smaller-scale, real-world story and implications make that violence all the much more offputting when it comes to the idea of a bookstore putting this comic on their shelves. 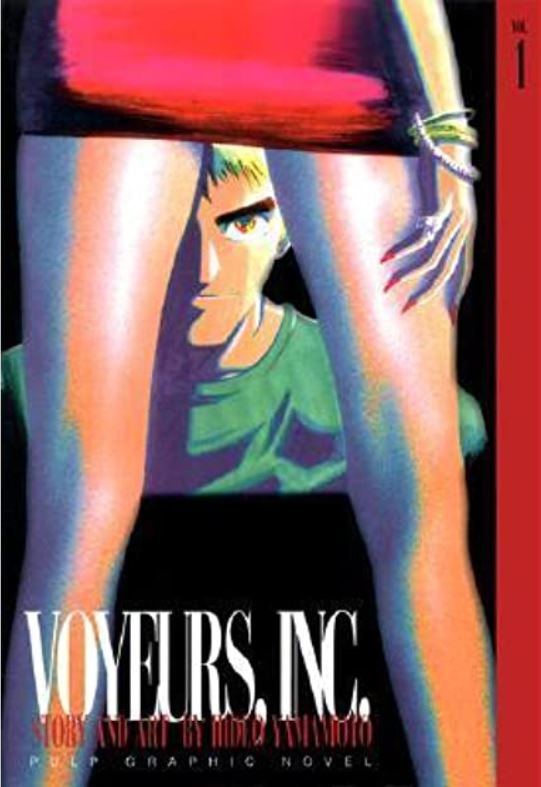 The only Hideo Yamamoto manga that was ever seen fit to be released in English was the 1992 Voyeur and its immediate sequel series Voyeurs, Inc. which didn’t even see its entire run printed in English. These early Yamamoto works had all of the hallmarks found in later Yamamoto manga, but with a bit more of an amateur quality and a lack of intensity. Starring a handful of characters who went around engaging in, as the title would suggest, voyeuristic activity as their preferred method of private investigation. Of course like Ichi and Kakihara, the cast of Voyeur and its sequel were also getting off on their morally grey deeds. From his earliest days, Yamamoto has been interested in our most perverse fantasies and exactly what brings people to them. Whether or not his curiosity has only been intellectual is beyond me but it’s clear his artistic and philosophical explorations have amounted to more than just hard R rated smut. 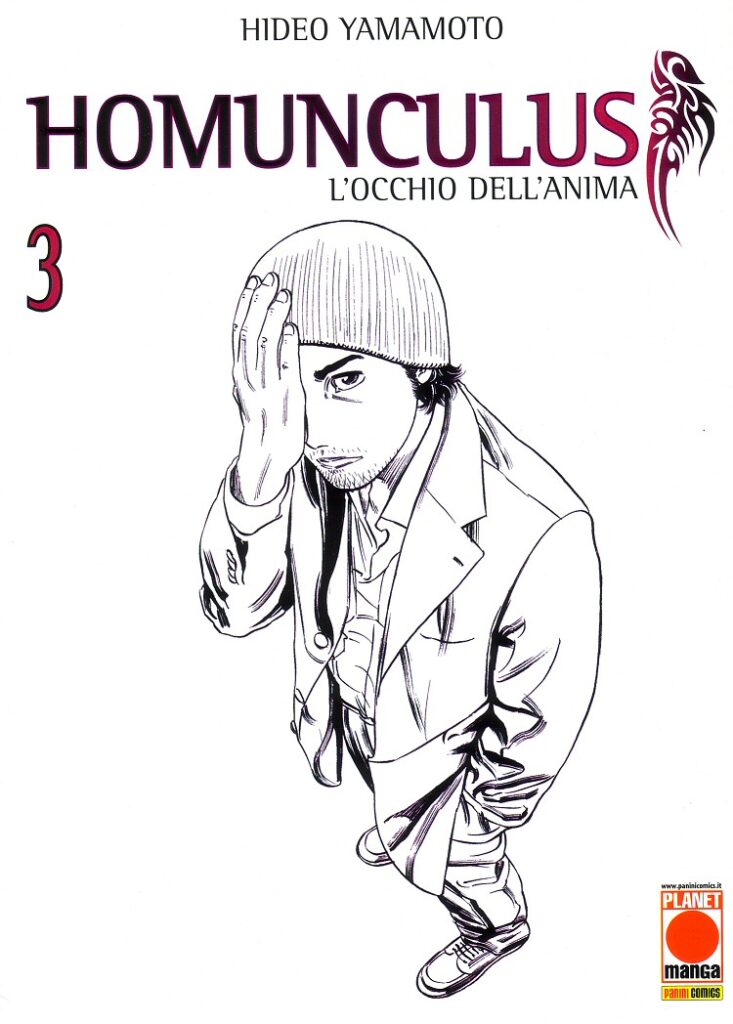 Put simply, the 2003 Homunculus is a manga worth learning Japanese for alone. While not entirely devoid, the manga’s comparatively light on the violence and sex at least when put next to Hideo Yamamoto’s earlier manga. Relatively palatable enough, this comic was officially released in Italian as you can see, as well as French, Spanish, German, and Chinese! Still no English release though, which has driven me to write this very article. Serialized in Shogakukan’s Big Comic Spirits alongside the likes of I Am A Hero, Goodnight Pun Pun, and even 20th Century Boys, it is something a cult-hit manga for those in the know and deservedly so. It’s starting premise alone of a homeless man named Nakoshi in his mid-30s getting a little too invested in the idea of trepanation, that is the outdated practice of drilling a hole into your skull to cure ails and unlock your spiritual or psychic potential, is already genius on its own. How Nakoshi’s experiments proceed takes it all to an entirely different plane. 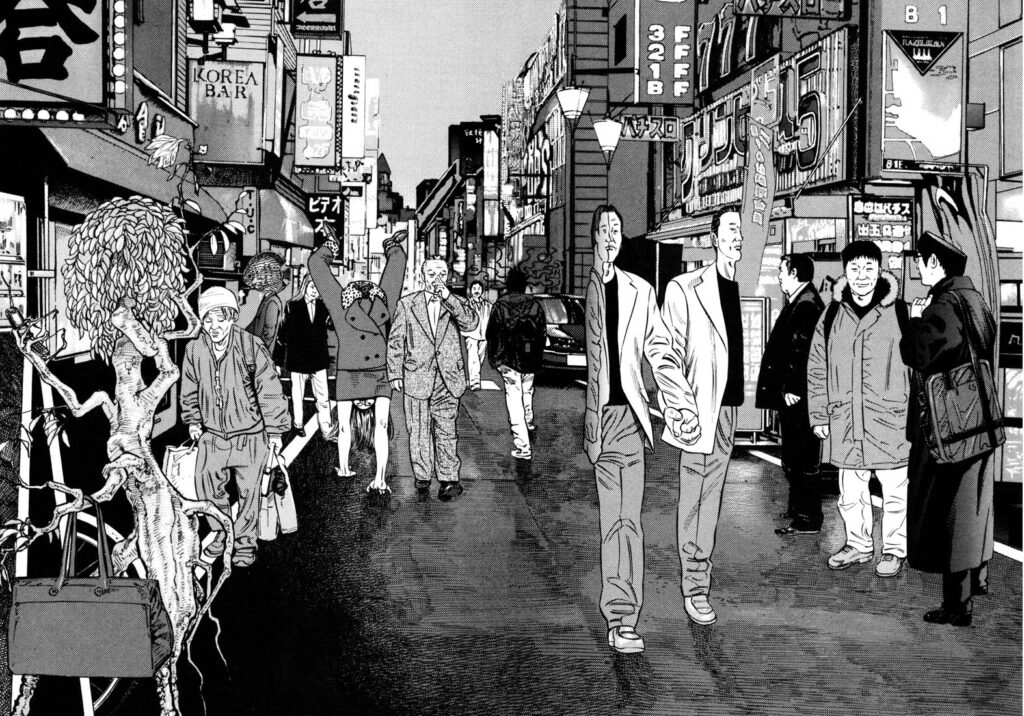 In Koroshiya Ichi, Hideo Yamamoto opts to examine the unsavory shades of the human condition through acts of wanton depravity. Here, the madness manifests itself through visual and psychological mania. As Nakoshi purposefully delves further into this world of what might either be entirely hallucination or genuinely of the paranormal, he begins to lose himself in it. Dubbing these ‘hallucinations’ Homunculi, no Fullmetal Alchemist jokes necessary, he’s able to psychologically assess the conditions of those around him and even attempts to ‘cure’ some who have been afflicted with these Homunculi. As Nakoshi stares into the Homunculi of others, visual manifestations of their traumas and desires only available to him, Yamamoto has the reader stare into Nakoshi. The 15 volume series an incredible trip that has the author penning out the most interesting composition of his career and finds him at the zenith of his story-telling ability. 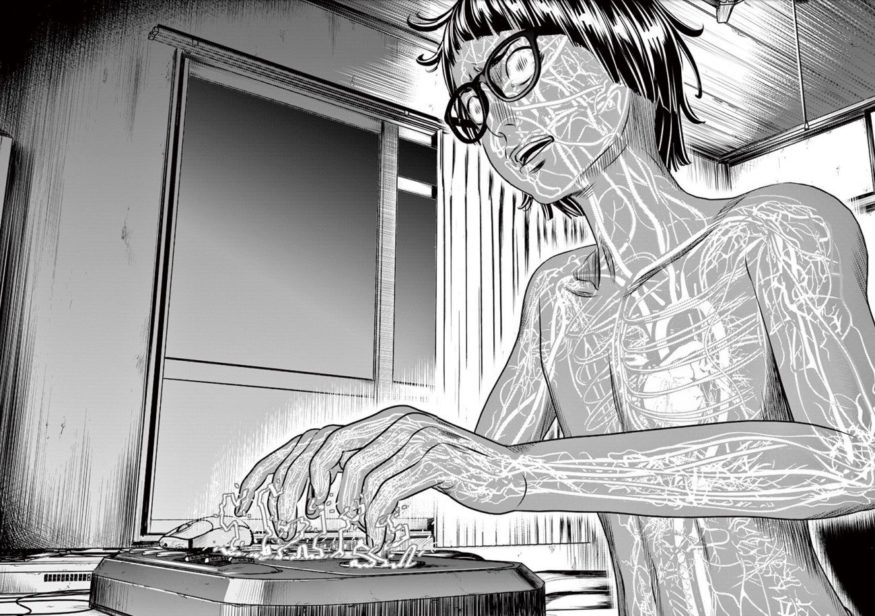 Hideo Yamamoto eventually followed up Homunculus, which ended in 2011, with Hikari-Man which is set to end this fall with its 8th volume. Admittedly, this is the first time a work of Yamamoto’s is maybe a step-down from his last. Despite an absence of much of the author’s signature qualities, the story about this light up boy is still worth a read as it features the artist experimenting with a lot of neat artistic techniques including some novel CG implementation. All in all, Hideo Yamamoto is an unsung hero of manga considered his complete absence from the English speaking readership of the medium! No other author has the ability to not just crawl under your skin but then shift his way up through your body and into the brain, where he’ll sit and stay for some time. Almost as if he’s taking notes on you and your way of thinking as you try to understand his.