Stars Align Did So Much Before Its Unfortunate Cancellation 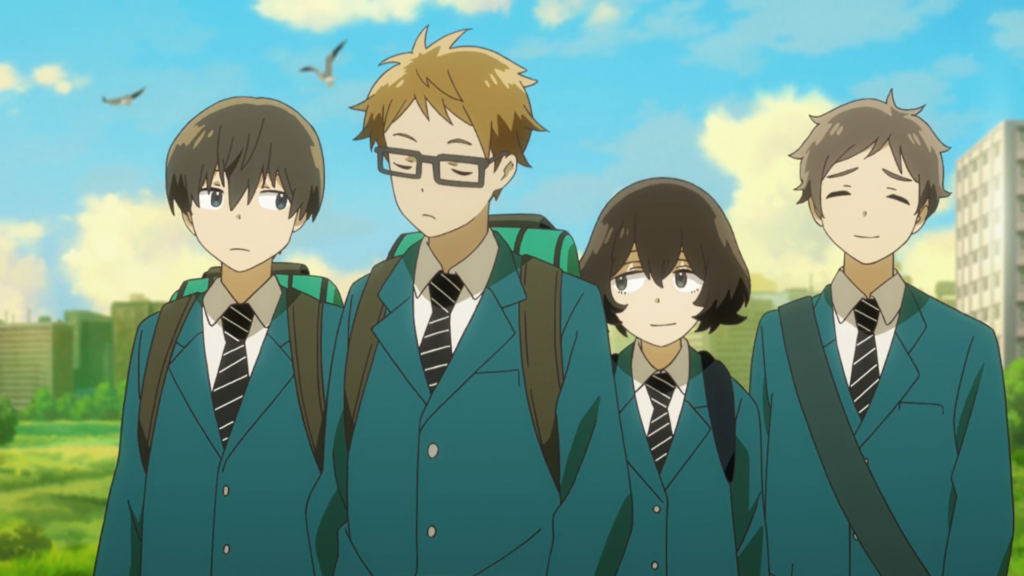 Stars Align wasn’t on my radar when it was actively airing. I remember about a year ago Jizue, a jazzy post-rock band I’ve liked for a long long time, announced they were handling the soundtrack for the at the time upcoming anime however it had slipped my mind by the time the show came around in fall of 2019. What got me to actually watch this bombshell of a show wasn’t, sad to say, the anime community buzzing about a show that was openly included queerness with openly trans and, using the actual word, non-binary characters. I didn’t see fans on Twitter reacting to the shocking but emotionally impact scenes of abuse and unhealthy relationships between parents and children that are all too real in our world. It wasn’t even sports anime heads talking up a show that had exceptional fluid tennis animations. No, I had no idea about all the show’s incredible qualities which we’re going to get to. Instead, my first rewatch in over a decade of the 90s classic The Vision Of Escaflowne left me fiending for more of director Kazuki Akane and wouldn’t you know it? He just directed his first original show in over a decade… Which unfortunately got canceled. 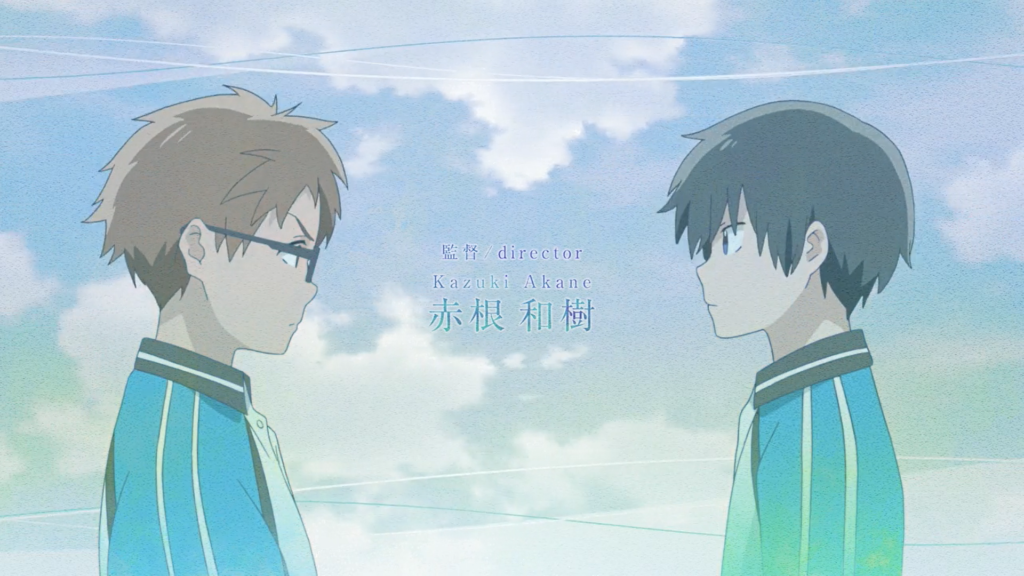 Before we get into why Stars Align was so good and what makes its premature cancellation so damning, let’s talk a little about its director and writer Kazuki Akane. Something of an auteur who always tried to make shows that stood out from the crowd, offering something different to the majority of cartoons coming out of Japan, Akane ‘s largely responsible for why it’s a standout. As I mentioned, he directed the seminal The Vision Of Escaflowne which definitively holds up as one of the best anime of the 90s. Cleverly combined a fantasy setting with mechs, it’s one of the most visually and emotionally impactful anime out there. From there he’s always tried his hands at new things with some winners and losers under his belt. Younger fans probably aren’t familiar with Heat Guy J which, while not being the best, actually aired on America’s MTV 2. The two shows he made after, Noien – To Your Other Self – and Birdy The Mighty Decode, are both something of cult classics in the medium. Unfortunately, this past decade has largely seen him directing the Code Geass: Akito The Exiled OVAs which were competent enough but not a series he had complete control over.  Writing and directing an entirely originally show, Stars Align was supposed to be his big return.

On that note, Stars Align was certainly Kazuki Akane’s triumphant return artistically.  The entire show oozed a simplified yet elegant style that looks good when still and even better when animated. These tennis matches are downright kinetic; You can feel each swing of the racket and each bounce of the ball. Maki Katsuragi and Toma Shinjo, the two leads, along with the rest of the boy’s soft tennis team move fantastically about the court in each and every episode. It looks like some roto-scoping, a form of animation that lays drawings over live-action film, was used to get the player movements down right although don’t quote us on it. However, the show was animated, its a joy to simply watch. Perfect shots, perfect timing, perfect ebb and flow. The Vision Of Escaflowne might be one of the prettiest TV anime we’ve ever seen with its gothic fantasy influences and high-quality Sunrise animation, but Kazuki Akane upped the game here with the character animation alone.  Just look at the trailer above if you don’t believe us, however, we’d stop the article here of the animation was all to write home about.

As has been hinted in the opening paragraph and the title of this piece itself, Stars Align covers a whole lot of ground. Lots of positives and negatives all swirled up, culminating in a show that accurately reflects real life. Since I haven’t actually explained it yet, the show follows around a boy’s soft tennis team on the verge of collapsing when the extremely talented Maki Katsuragi transfers in and starts turning things around for the time. While this set up on its safe sounds like a dime a dozen set up for any shonen sports series, its how the show focuses on the real lives of these characters instead of the games themselves that sets it apart. Not to say the soft tennis just acts as a backing piece, but when it comes to the actual sports aspect of the show its how Maki and his partner Toma improves team morale and individual investment. They do that by building a genuine camaraderie with one another, one that’s predictable on sharing each other’s pains and offering each support, understanding, and help when needed. The boy’s soft tennis club builds actual bonds with one another, not just wins games, often helping each other through trying times. 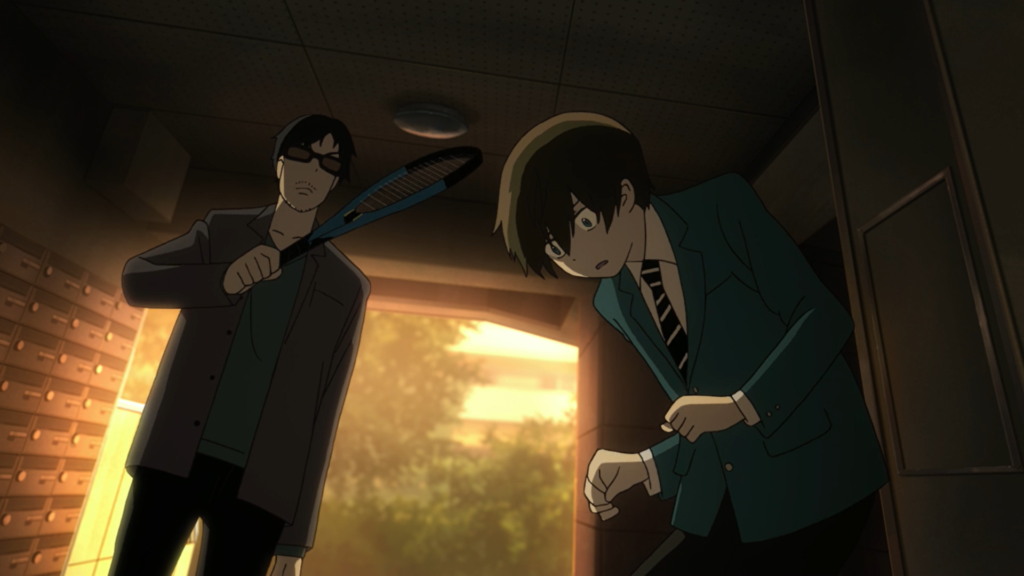 One big area in which the boy’s tennis club support each other is with family relations. Stars Align uses its platform to depict a whole host of less than ideal parent and child relationships, each with different nuances. They range from parents who love their teen kids but don’t how to give them their freedom to outright depictions of domestic abuse. Just about every character has at least one of their parents being a total irredeemable jerk in some fashion. Whether its displays of physical violence, utter rejection because you regret having a kid, being overprotective to the point of insanity, or disapproval of your kid’s choices, Stars Align does a whole lot more to empathize with youth in bad situations than “ugh, I don’t wanna do my homework! I hate my dad he took away my iPad!” Arguably just about every one on the team having a dysfunctional parent is statistically improbable and feels like a little much in totality, but Kazuki Akane handles each one of these situations with the appropriate amount of weight.

Some scenes aren’t for the faint of heart but if you can stand the pressure, the show’s truly worth hearing out. Of course with a cavalcade of such crappy parents, the way these kids handle their stress and trauma comes out in different ways. Some fare better than others, repressing their home problems or tying to focus on the soft tennis club so they can ignore their other anxieties. It all results in some real darkness that we don’t want to actively spoil but want to highlight that Stars Align is as willing to show the consequences of bad parenting as it is to show said parenting in the first place. Future child havers be warned. Bittersweet isn’t the word because you end up feeling terrible for this club of boys who are good at heart, and angry that you can’t help them. However, they grow to have each other as more than just teammates. they become each other’s family. Something real-life victims of trauma often become for one another and seeing those connections true to life replicated in the show gives me some hope for anime, as does one other factor. 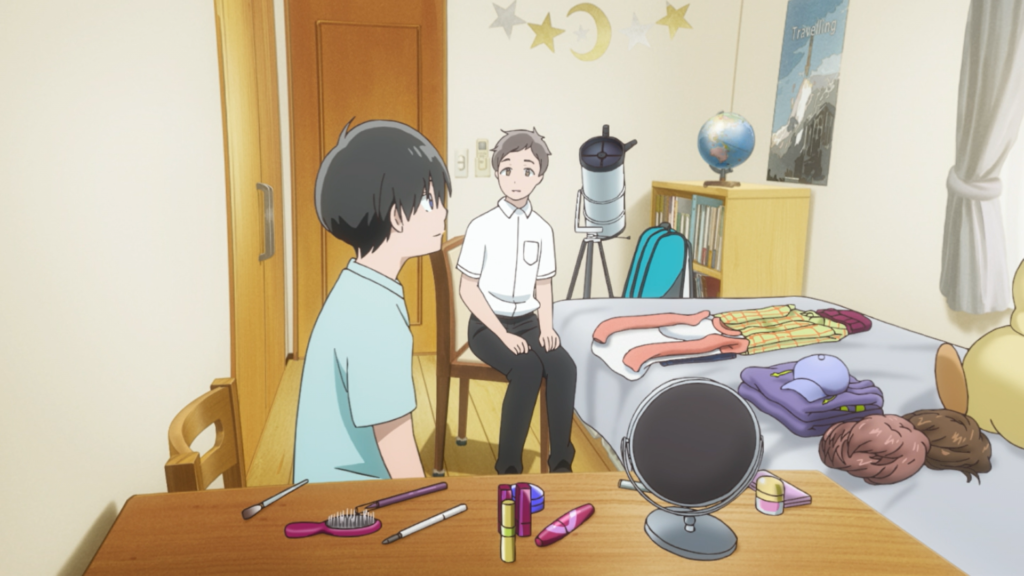 Stars Align has genuine queer representation, and a way that most resonates with me; Matter of fact, just like in real life. The visibly and audibly includes a number of queer characters without relying on the fact their queer alone as a substitution for personality or story-telling. One scene that really stuck with me, screenshotted above, comes from episode 8 when Maki first visit fellow team-mate Yu’s home. They have to dress up as girls to infiltrate a rival school’s game for research, which at first seems like a cliched trope. However, Akane uses the trope to open up a dialogue between the two characters, Yu opening up about preferring to be called ‘Yu’ over their birth name ‘Yuta’ and that they identify as Non-Binary. While there have been trans, gay, and ambiguous characters in anime before, this is the first time I’ve heard this direct terminology used and so bluntly at that. Maki talks about a family friend of his and his mothers who happens to be trans, giving ‘Yu some reassurance and confidence in their identity. It’s a moving bit but one that’s not inherently played up for melodrama.

There’s any number of other poignant scenes and characters we could highlight, and there would be even more than there are if the show hadn’t been prematurely canceled. When the 12th and final episode aired in December, Kazuki Akane came out and said Star’s Align was originally envisioned and set to be a 24 episode show. Due to quote-unquote reasons, its was cut down to twelve for the time being, though the director’s determined to get the rest out in some form in the future. The last episode ends on a heavy cliff hanger and so many other irons were stoking in the fire, so if you read this piece and feel like maybe the show will resonate with you please please please give it a watch. Between its honest depiction of abuse, realistic portrayal of queer lives, spectacular dynamic animation, and the heart-warming lads bond, the show offers something true to life and does it successfully too.

You can watch Stars Align on Funimation Now.