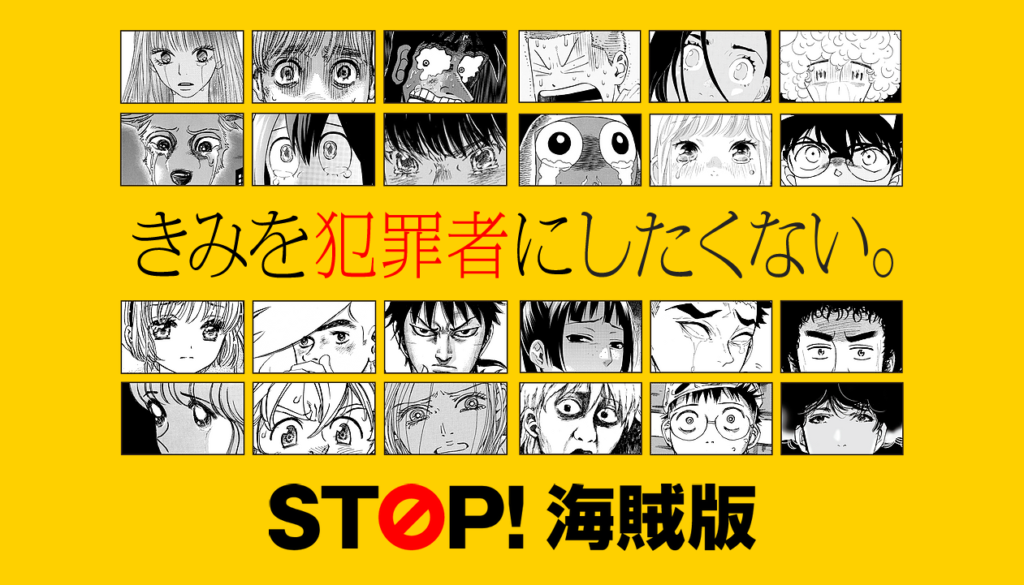 Last year, the Authorized Books of Japan (ABJ) teamed up with several famous mangaka to launch the STOP! Piracy campaign, hoping to raise awareness about the detrimental effects that piracy has on the manga industry. It’s back again this year, but better than ever: while last year’s lineup was nothing to be sniffed at, it must be said that the calibre of artists recruited for the 2021 STOP Piracy campaign is quite impressive.

Contributing short manga this time around will be Koyoharu Gotouge (Demon Slayer: Kimetsu no Yaiba), Kohei Horikoshi (My Hero Academia), Hajime Isayama (Attack on Titan), Gosho Aoyama (Detective Conan), Nobuyuki Fukumoto (Kaiji), Paru Itagaki (BEASTARS), and Chica Umino (March comes in like a lion), to name but a few. Even CLAMP is here: seems like everyone and their dog got invited to take part in the STOP Piracy campaign for 2021.

That’s not such a bad thing. Last year’s lineup did lack a little bit of star power with such figures as Akira Akatsuki (Medaka Box) and Hatomune Tsurun (Mitama Security: Spirit Busters). I mean, if getting Koyoharu Gotouge, author of one of the biggest manga in decades, isn’t enough to get people to sit up and pay attention, I don’t know what is.

If last year’s campaign is anything to go by, then these famous mangaka will contribute short comics about piracy and the manga industry over the coming year. I’m certainly interested to see how Paru Itagaki handles it, and whether she explores the issue using her trademark anthropomorphized animal characters. It won’t be that much of a stretch for Fukumoto, who has more than a few years of experience dealing with the criminal underground.

The ABJ undoubtedly knows how impressive the lineup is for the 2021 STOP Piracy campaign, as the key visual this time around features the eyes of each one of the creators’ iconic characters staring out at the viewer accompanied by the tagline ‘We don’t want to make you into a criminal.’ Conan Edogawa’s eyes, in particular, are irresistible: you wouldn’t want to let the little detective down, would you?

You can learn about the 2021 STOP! Piracy campaign via the official ABJ website. Remember to always support the official release: we’ve actually written a handy guide to help you do so.