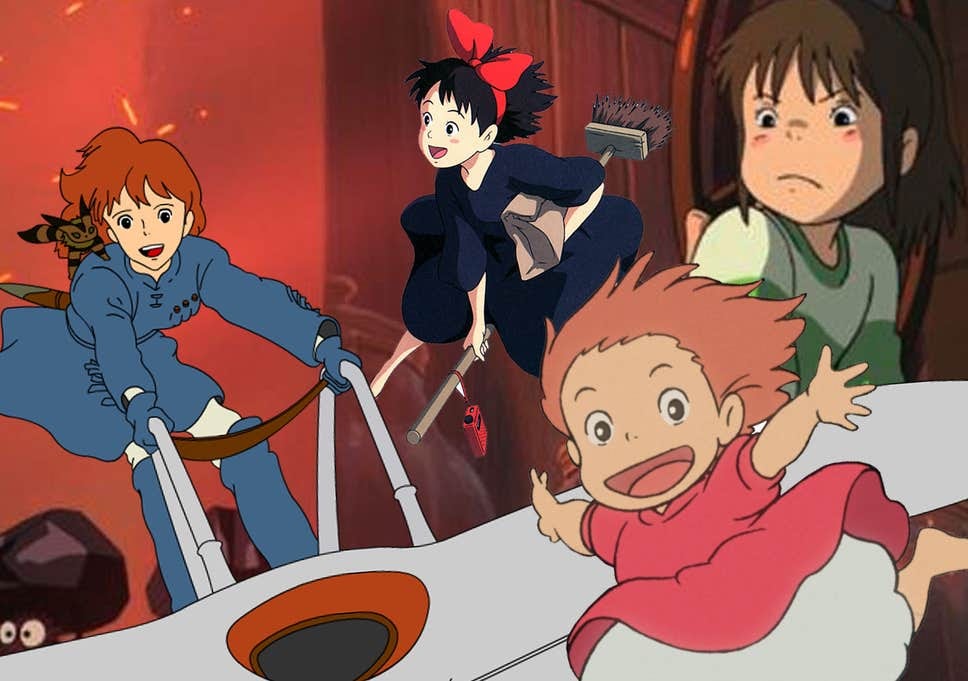 There’s not a single person in my life who doesn’t have a favorite Studio Ghibli film, and I’m willing to bet the majority of those reading can say the same.

The Japanese animation company rivals Disney worldwide in the hearts of young and old alike, consistently releasing films that pull at our heartstrings, make us laugh and wow us with their themes, art, and powerful musical scores.

The first Studio Ghibli film I can recall causing a ruckus in my youth was Spirited Away, which picked up the Oscar for Best Animated Feature in 2003. Princess Mononoke had come before and had certainly been impressive, gaining the studio plenty of initial fans stateside, but only after Spirited Away did I start seeing proof in my everyday life of Studio Ghibli becoming a household name.

T-shirts were being worn, buttons were being sold, and people around the world were realizing the unmatched emotional power and artistic genius these pictures held.

We’re getting a Studio Ghibli theme park in a few years, a yearly Ghibli Fest brings the films back to theaters via Fathom Events, and the Studio Ghibli museum in Tokyo has tickets that sell out daily. It’s clear that this is far more than a trend.

Oftentimes, it isn’t only the stories alone that stay with us, but the characters we’re introduced to along the way. Studio Ghibli produced the soundtracks of our childhood and created faraway lands we’ve never forgotten.

Beyond that, they’ve brought characters into our lives that aren’t simply drawings on a screen, but reflections of who we are. So much of Studio Ghibli’s success stems from how relateable their protagonists (and sometimes, antagonists) can be. Have you ever given a thought to which of these characters you seem to bond with the most?

Most people can identify with these ten characters from the Studio Ghibli universe, whether in their thoughts, their strengths, or their flaws. 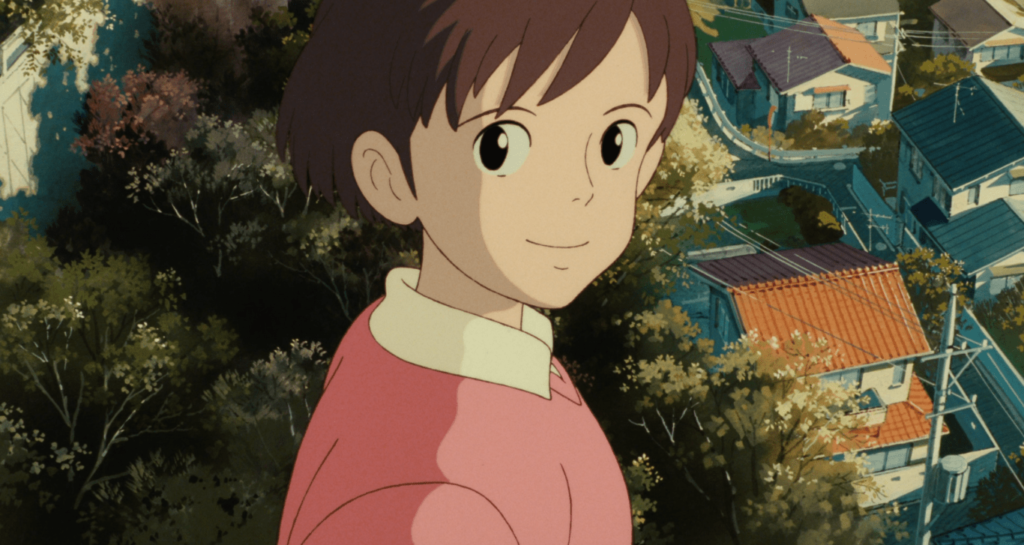 Whisper of the Heart is a somewhat lesser-known Studio Ghibli film here in the west, getting a US DVD release 11 years after it debuted theatrically in Japan. For those who have had the pleasure of seeing the film, the Japanese version of ‘Take Me Home, Country Roads’, written by the protagonist Shizuku Tsukishima, was probably enough to evoke that immediate sense of comfort and nostalgia. (Recently, a pretty cute cup was released stamped with the song title.)

Shizuku isn’t some fairytale princess or powerful otherworldly entity. She’s a bookworm struggling with typical middle-school issues, constantly daydreaming in class and scribbling ideas in the margins of her notes.

Like the rest of us in our youth, she’s an ordinary person trying to find her purpose and what path to take. Can’t decide on a major? That’s Shizuku in a nutshell. 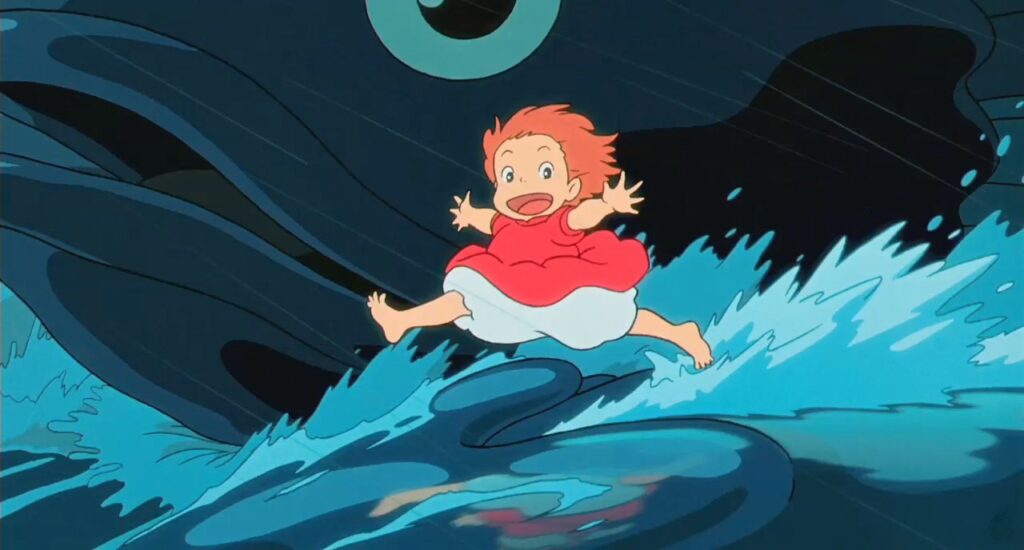 Ponyo on the Cliff has a lightness to it, a gentleness that immediately tells the viewer that everything will turn out alright. The polar-opposite of something as deep and dark as other films like Princess Mononoke, Ponyo is a fairytale, something that both parents and children could enjoy equally. The title character, while coming across as somewhat simplistic, is endearing in a way every viewer of the film can comprehend.

Ponyo is a 4-year-old, sometimes a fish and sometimes a human. Mischievous and fun-loving, she holds a mirror up to viewers, asking each of us to ponder on simpler times.

Remember how much you could eat as a kid without gaining weight? Remember just laying in the grass, when your largest decision was what game to play next? The entire character is the embodiment of childhood. 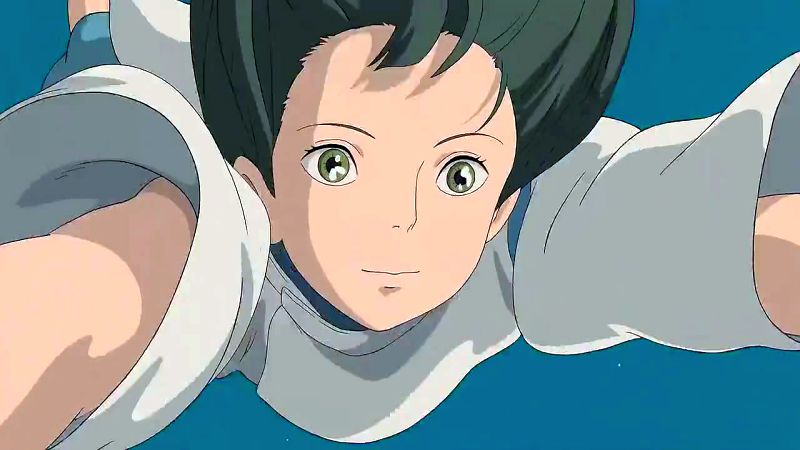 Spirited Away was a game-changer. It became the most successful film in Japanese history and is now called one of the greatest animated films ever produced. When it won the Academy Award for Best Animated Feature here in the states, it was the first (and still the only) hand-drawn non-English film to ever achieve that honor.

Plenty of characters in the film add to its staying power, but Haku represents so much of what is good and bad in each of us. He goes above and beyond for Chihiro, kindhearted and supportive, doing everything in his power to ensure her safety, but he himself is suffering greatly beneath this single-minded endeavor. Are you the kind of person to put other people’s wellbeing before your own? You might be a dragon spirit. 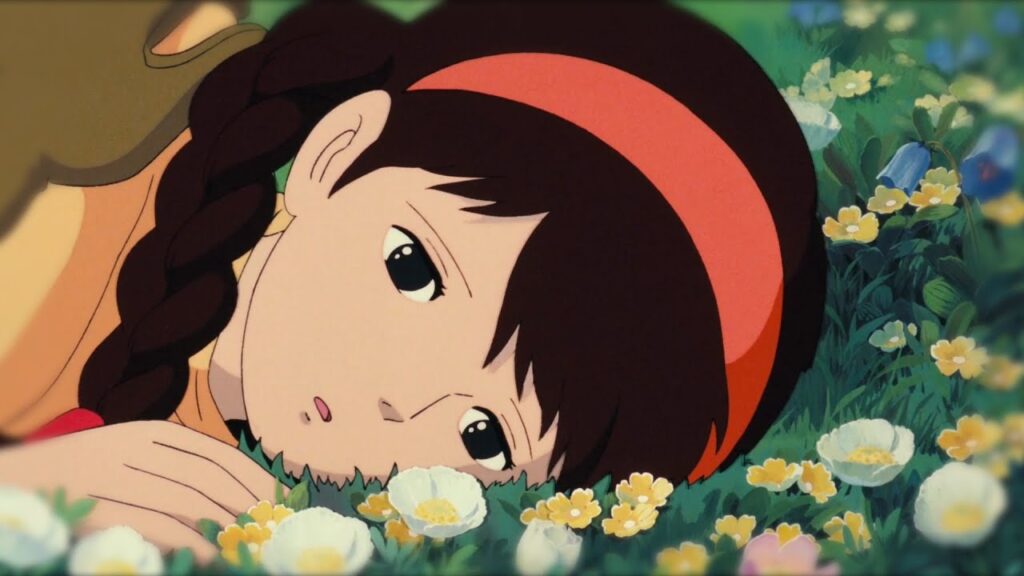 Technically, Castle in the Sky is the first Studio Ghibli film, released in 1986. (Nausicaa of the Valley of the Wind may have come first, but the studio hadn’t yet been founded.) With its steampunk style and lasting effect on Japanese culture, it’s often undervalued here in the states, despite having influenced certain Disney films like Atlantis: The Lost Empire.

A reserved and gentle spirit, Sheeta is the kind of person who wants to deal with everything on her own. Not wanting to be a bother to anyone, she pushes others away, largely to keep them from danger. She’s a great reminder to let yourself lean on others, and allow yourself to seek help when you need it. 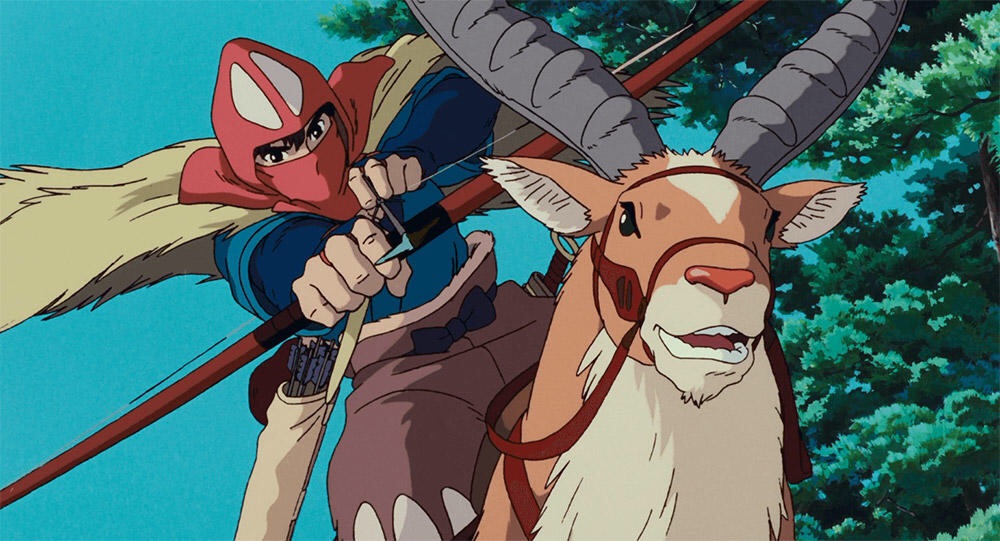 Princess Mononoke is one of Studio Ghibli’s darker films, certainly not child-friendly. With that being said, it’s up there with Spirited Away in favoritism and was given four out of four stars by Roger Ebert back when it was released by Disney in the states. (That’s despite the sometimes panned English voice cast.)

Ashitaka is an inspirational character, beginning the movie with a painful curse, and carrying on regardless. He’s fearless, and while he can seem cold from the start, he wants nothing more than peace, loathing violence. He respects nature and tries to strike the word ‘hate’ from his vocabulary. In these uncertain times, it’s safe to say the majority of us just want peace. 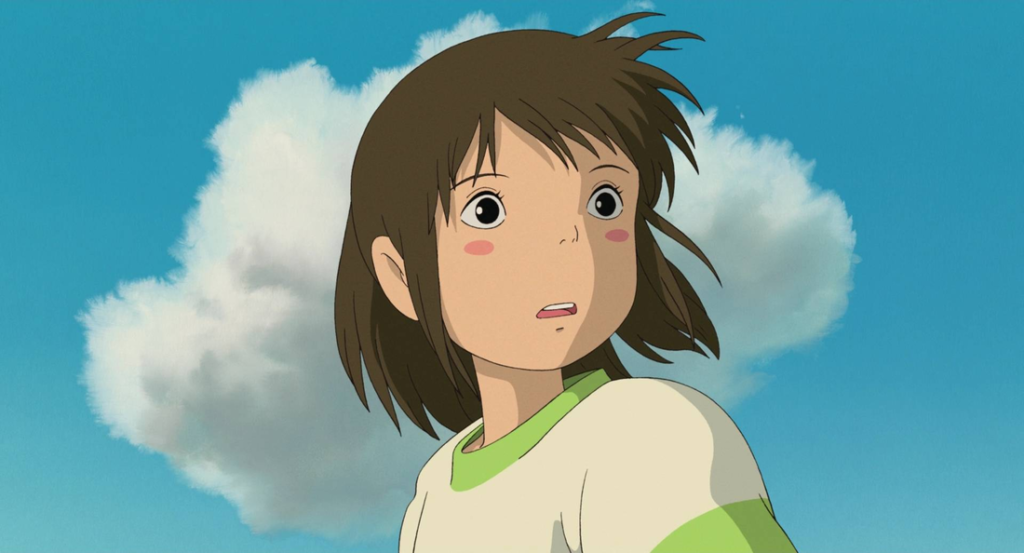 Just like the film itself, you can’t have Haku without Chihiro nearby. I saw myself in her almost instantly, and not only because I was roughly the same age when I first saw the film.

When her parents don’t heed Chihiro’s warnings to stay behind, she’s anxious at the idea of getting into trouble. To achieve her goal of setting her parents free, she will do anything asked of her. If you were a teacher’s pet like me, Spirited Away likely struck a chord. 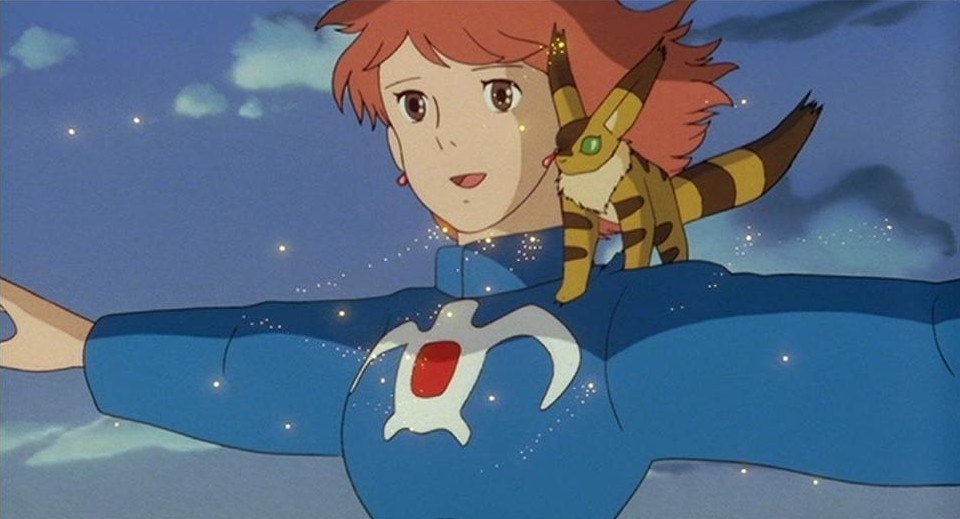 Nausicaa of the Valley of the Wind was directed by Hayao Miyazaki, with a score by Joe Hisaishi…in the brief time before Studio Ghibli was even a thing. It’s a true action-adventure film, unforgettable in its depth and complexity for the time.

Though a princess character, Nausicaa is more a warrior than anything, not content to sit back and watch her people suffer from the poison which wreaks havoc throughout the film. Her bravery and honesty are second to none, and her psychic powers… well, those are a bonus. For those who didn’t back down from the schoolyard bully, Nausicaa is you. 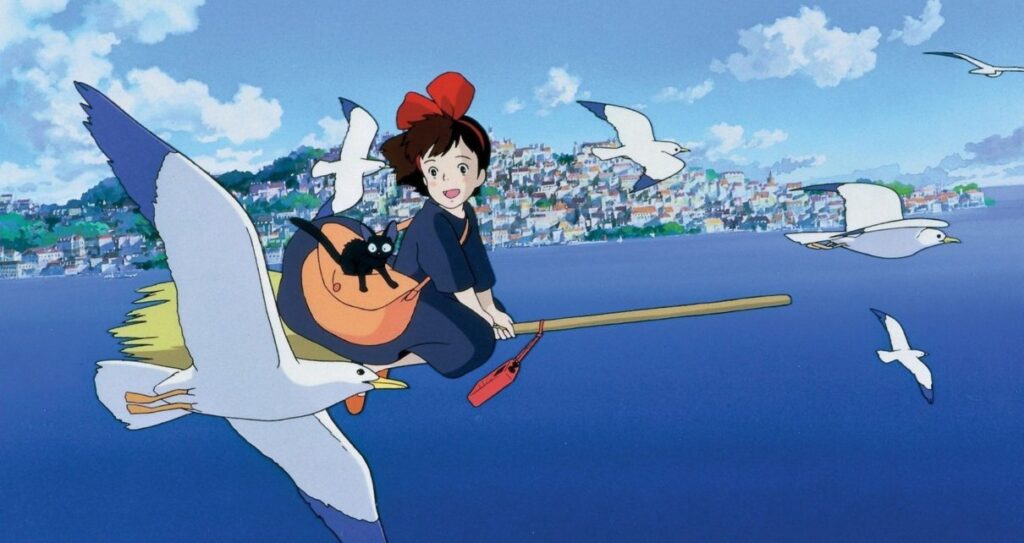 My husband recently shocked me by dropping the bomb that Kiki’s Delivery Service is the only Studio Ghibli film he’s seen in its entirety. (I’m fixing that this weekend, don’t worry.) It inspired me to watch it again, and I was taken aback by how much I wanted to live in its bright, peppy world. It was also the first film released in the Disney/Studio Ghibli partnership in 1998.

While displaying plenty of normal traits for a 13-year-old girl, Kiki has always struck me as being terrible at taking criticism. She’s proud and stubborn, the very image of how I was as a teenager. Plenty of us were show-offs back in the day. We’re all Kiki. 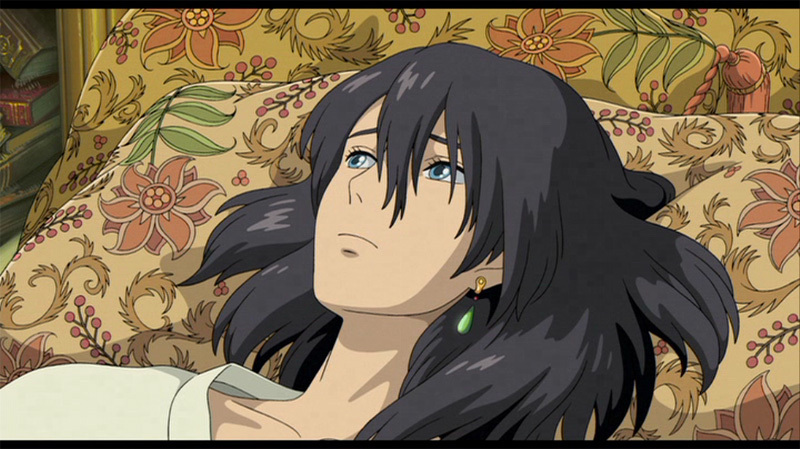 Howl’s Moving Castle was one of Miyazaki’s passion projects. When referring to the film, the overarching message is that life is worth living, along with being anti-war, as many of his films had been previously. The setting of the film is striking, with Miyazaki having traveled to France to study its architecture.

The titular character nearly steals my top spot. Howl is someone who hides behind a mask, acting tough and aloof in regards to other people and the outside world, only to hide someone extremely charming and likable. But like the rest of us, he sometimes lies, he sometimes keeps secrets, and he can be vain, making sure his look is on point. (Okay, that one is definitely accurate for me.) 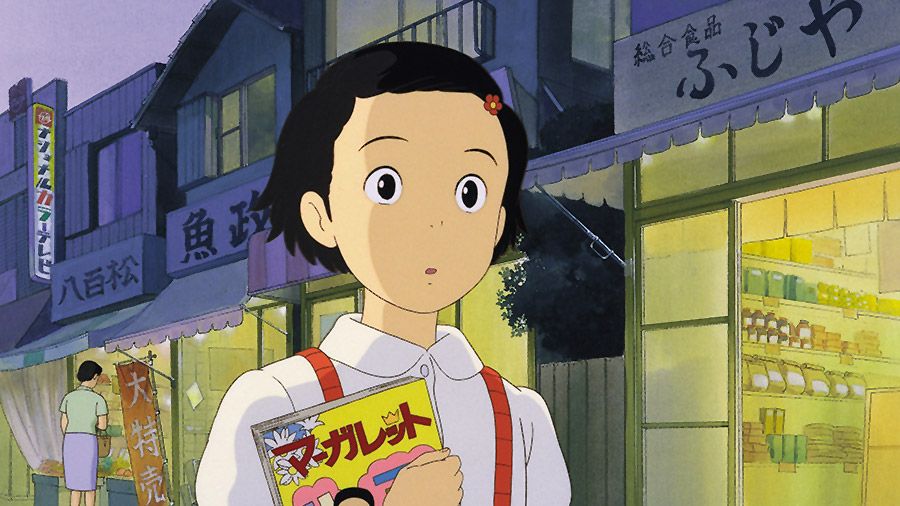 Released in 1991 in Japan to a largely adult-audience, the English release didn’t come until 2016. It’s a true slice-of-life film, showcasing a rather average life in the Japanese countryside. It’s also not a Miyazaki film, instead directed by the accomplished Isao Takahata.

It completely blindsides you with whimsical nostalgia, both for places you’ve never been and for your own childhood. If you could live your life over, what would you change?

Taeko hits home for me, almost 30 and uncertain of the choices she’s made. Over the course of the film, she ponders her career, her love life, and thinks back to youthful frustrations of tests and boys.

The film asks the audience once severely powerful questions… Did you reach your childhood dreams? Taeko is a raw character, imperfect and doing her best. Just like the rest of us.