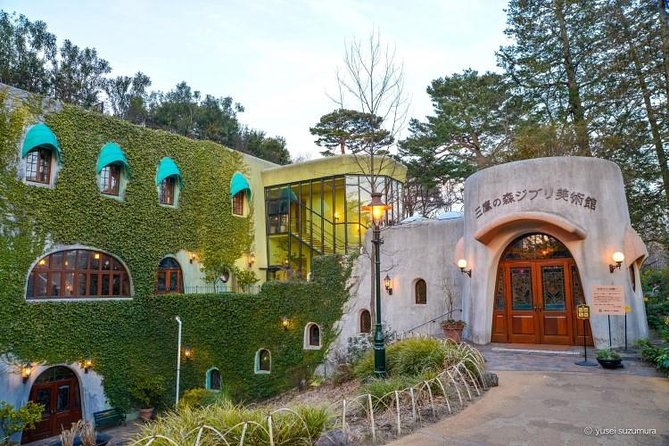 Get Your Studio Ghibli Museum Tickets In Advance!

The Studio Ghibli Museum is located in Mitaka, Japan, a city in the western portion of the Tokyo Metropolitan area. Guests will know they’ve arrived not only by the dreamlike architecture of the building, but also by the life-sized Totoro waiting to greet them at the ticket counter, along with soot sprites peeking out at them from beneath the window.

This isn’t actually where you receive your tickets to the Ghibli Museum; guests must head through another door into a room with a large mural on the ceiling featuring the various characters from Miyazaki’s films.

The museum only accepts advance reservations, and are exchanged for actual tickets in this room. Purchasing tickets for the Studio Ghibli Museum can be a little tricky; advance reservation tickets can be purchased through Lawson Tickets or through travel agencies like JTB Group Overseas.

The tickets themselves are actually pieces of the 35mm film stock that the films originally appeared on, making each guests’ ticket a unique piece of art. The surprise from wondering whether you’ll get frames from classic Miyazaki films like Princess Mononoke or Nausicaä of the Valley of the Wind is part of the fun! 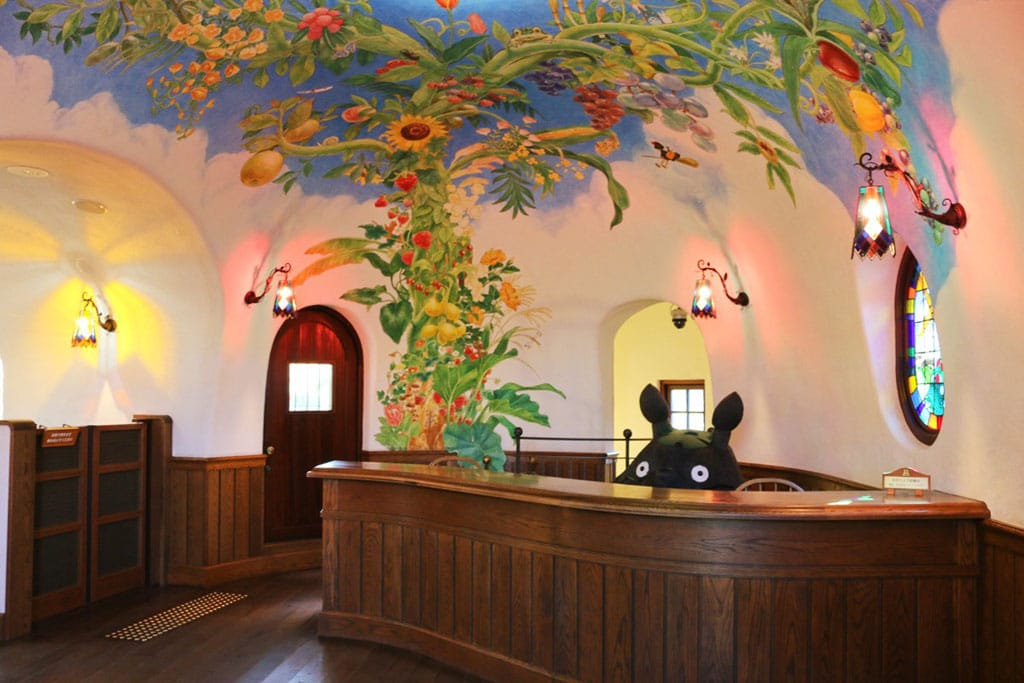 The Studio Ghibli Museum is West of Tokyo, North of Magic

The Ghibli Museum’s main area is a soaring atrium of spiral staircases and intricately-designed walkways. Guests are encouraged not to immediately head out to a part of the museum they want to see first, but to take a few moments and explore the space to see if they find any particular area of the atrium they like more than the others.

The advance tickets sold come with entry times, and if guests purchase tickets with early enough entry times, there should be plenty of time to explore and revel in the museum before it closes at 6 PM.

Many of the exhibits are permanent installations, but some special exhibitions will come and go according to their schedule. Many of the permanent exhibits have to do with animation and film production, such as an animation studio that looks as though the animator that worked there left just minutes ago.

Visitors can look at notes and references that are set up around the desk and even on the bookshelves, which are filled with books related to things that the animator might be looking to create.

Visitors can also see the Beginning of Movement room, which uses special exhibitions and interactive media like zoetropes to explain how animation works and how Studio Ghibli uses those techniques to bring their animations to life.

Visitors can see those techniques in action at the Saturn Theater, which shows 15-minute short films that use various innovative animation techniques.

These films also rotate every month, and it’s possible to see what films are coming up and currently playing by checking with the Studio Ghibli Museum’s website. Most films are directed by Hayao Miyazaki, but a few are written or directed by other Studio Ghibli animators.

One of the highlights of the Studio Ghibli Museum for kids in particular is a room with a slightly-smaller-than-life Cat Bus from the film My Neighbor Totoro.

This exhibit is only for kids 12 and under, and encourages jumping and climbing atop this fuzzy friend brought to life. While this Cat Bus is only for kids, there is another larger one around the museum for kids and adults to sit in and pretend they’re heading off on an adventure.

For those looking for a quieter moment with their children, the Studio Ghibli Museum also offers TRI-HAWKS, their reading room full of books specifically picked out by Hayao Miyazaki. The idea is to allow for a space where children can spark their curiosity and be introduced to strange and wonderful stories specifically through books.

The museum also offers a newsletter that acts as a book club, introducing people to interesting books that have come into the museum’s collection.

For guests hungry after seeing all the stills of Studio Ghibli meals (At one point the subject of a whole exhibit!), the museum also has a restaurant known as the Straw Hat Cafe. The cafe offers hot and cold seasonal meals sourced from local farms. Visitors can eat inside or sit outside and take in the views of Inokashira park from the cafe’s deck.

One of the things you may notice as you approach the Studio Ghibli Museum is the large statue of the Iron Robot from Castle In The Sky standing atop the museum. Visitors can climb up to this statue as it watches over the visitors to Inokashira Park and the museum itself, just as it watched over Laputa. Visitors can enjoy the views of the park from atop the museum, and enjoy the seasonally-changing rooftop garden near the statue.

When it’s finally time to leave, guests can stop by the Studio Ghibli Museum’s gift shop, MAMMA AIUTO. Named after the sky pirates from Porco Rosso, the shop has a variety of Studio Ghibli-related merchandise such as plush dolls, jackets, and hoodies.

There’s also items like model planes from Porco Rosso, steampunk Laputa-style watches, or strips of film from classic Miyazaki movies fashioned into bookmarks. You’ll most likely find what you’re looking for at the MAMMA AIUTO gift shop, but you’re even more likely to find something you didn’t expect. Unfortunately you can only get in using your Ghibli Museum ticket, so there’s no stopping by the park just to pick up merchandise.

The films of Hayao Miyazaki still hold a legendary status in the worlds of art and cinema, and the prospect of exploring those worlds deeper and learning about what makes them such captivating works is nothing less than magical.

The Studio Ghibli Museum offers visitors a rare chance to really come face-to-face with Miyazaki’s works and even possibly spark their own imaginations.

Visiting the Studio Ghibli Museum is one of the can’t-miss opportunities for those traveling around Tokyo.