Interview With the Creators Behind the BEASTARS Anime From Studio Orange

The animated version of Paru Itagaki‘s manga BEASTARS has been a breakout hit since its debut in Japan in late 2019. This is clearly in part to the masterful work of Studio Orange in using 3DCG to create highly expressive versions of the anthropomorphic characters that make up the main cast. To get a better idea of what went into the production of the adaptation we sat down with BEASTARS animation producer Kiyotaka Waki, director Shinichi Matsumi, and Studio Orange CEO/CG Director Eiji Inomoto for first-hand accounts of the background and development. 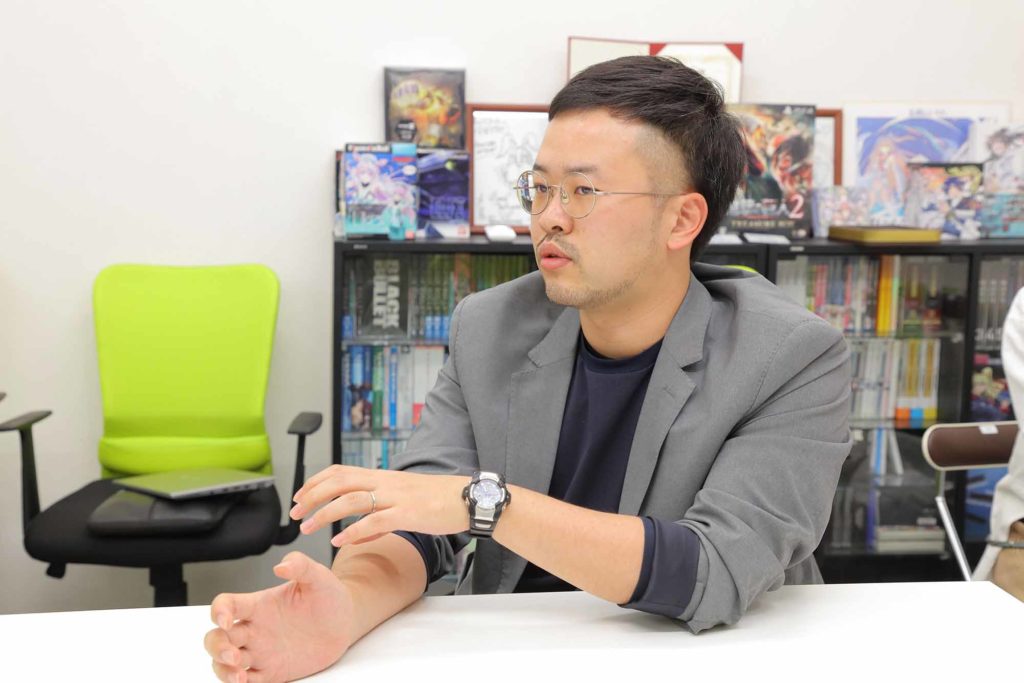 OTAQUEST: I’ve heard that Orange was interested in making BEASTARS into an animated series before the Manga had even gained traction. How exactly did that come to be?

Kiyotaka Waki: The desire to adapt it to animation began when I first read the manga and thought it was an amazing story. From the start, I was considering it to be CG animation instead of hand-drawn. When it comes to animal characters [in Japan], it’s commonly thought that it can be only done in hand-drawn animation but there are cases when there are characters with three-dimensional builds where it becomes too complicated to animate in hand-drawn and they end up not having much motion. I imagined if this was done in CG, it enables rich expressions and becomes a show that is exciting to develop into animation. This is why I pitched the project.

OTAQUEST: Did you as the director have some sort of vision come into your head [when Waki was talking about making it CG]?

Shinichi Matsumi: I figured it would be impossible to replicate how the original looks if we were to do it in CG. So then the question became ‘what kind of expressions can we make with CG?’ and I realized we wouldn’t know unless we actually tried to do it.

Eiji Inomoto: With regards to that, character designer [Nao] Ootsu successfully interpreted Itagaki’s work when we started production. Ootsu is an artist who draws very realistic proportions so his designs work well with CG. It’s a design that is easy to turn into CG without losing its original charm.

OTAQUEST: What were some of the key themes and ideas from the manga that you felt were necessary to include in the animation?

Shinichi Matsumi: The major focus is that this is a human drama. I kept this in mind even when choosing actors. The focus is to work with people who can improvise in reaction to other actors and we ended up going with many people who have experienced stage acting. Another thing is not interrupting the flow of conversation. The original would alternate between conversation and monologues and I wanted to keep the flow going. Of course, it can’t be the same as the manga but the benefit of CG is that a single scene can be drawn out for a much greater amount of time. It’s closer to the pacing of live-action and with this, it makes it possible for very dramatic animation.

OTAQUEST: Bringing the conversation back a little, how exactly did you bring movement to the designs of these characters?

Shinichi Matsumi: In regards to how we created the motion, we first pre-recorded the dialogue audio and then based on that worked on CG processes such as motion capture.

Eiji Inomoto: We used the same process when working on Land of the Lustrous. At the time we were really anxious about if the [motion capture] method would work, but it worked out, so we decided to keep the method. In our case, it’s our in-house animators who are doing the motion capture so it’s not professional actors acting. That’s why it becomes much easier to act [out the motion] with prerecorded audio. Also, the voice actors are acting without being constrained by their character’s movements so the animation is capable of more realistic movements. 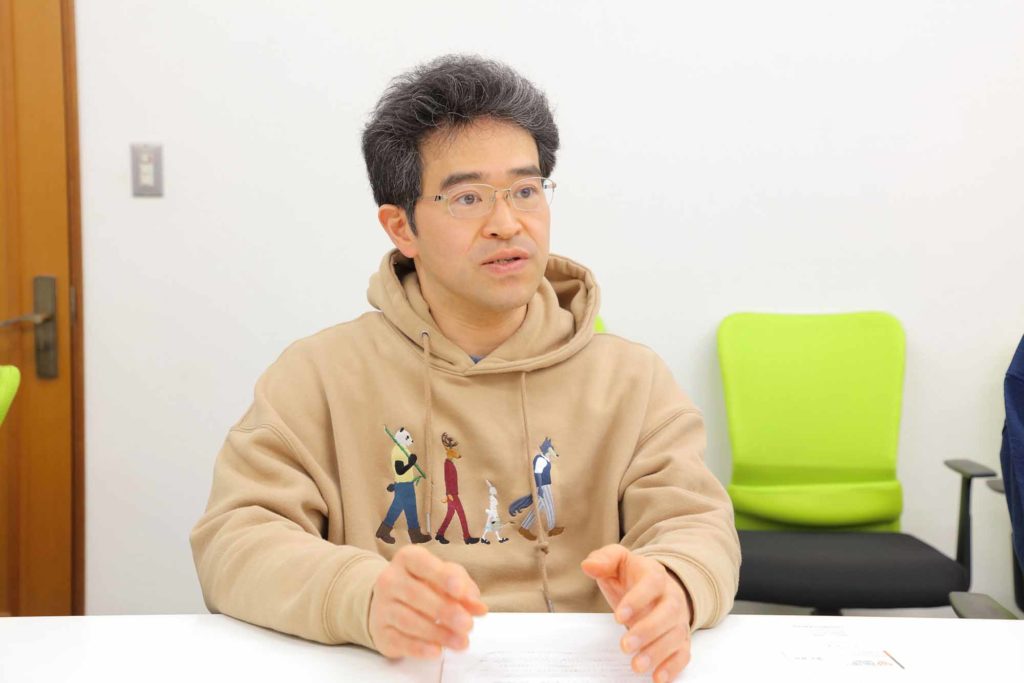 OTAQUEST: If the animators are doing the acting by themselves, it sounds like it’s effective for following the hand-keyed animation process?

Eiji Inomoto: Yes. It’s not acting by a professional actor but we don’t use the motion capture data as is. Even if the acting is not up to quality, if the following hand-keyed animation can bring the animation up past the bar, it is sufficient. We’re very persistent on layout and timing unique to animation so there are things where our animators motion is better.

OTAQUEST: And as the director, how exactly did you direct them on the motion acting?

Shinichi Matsumi: I first check it once when we shoot the motion capture. From there I check to make sure the voices and the acting are in sync and if the sequence of shots makes sense or not. After that, I go into more of the details such as motion capture of the faces. That’s the general flow of the process. So sometimes we had to recapture some movements. However, when we first began, our understanding of the characters was not deep enough so as we kept on working there were fewer retakes.

OTAQUEST: When it comes to pre-scored production, are there instances where you changed the storyboard after hearing the dialogue audio?

Shinichi Matsumi: Yes, there were.

OTAQUEST: So there’s are some unique interpretations that are born from there. As the subjects this time around aren’t human, did you explore the differences from humans while planning the facial captures?

Eiji Inomoto: The project began from the point of purchasing a facial capture system so we had the question of ‘will this even work well with animals?’ (laughs). However, we were able to find a video that used that system to move animals. So ‘If another company can do it, then so we should be able to.’ was the idea we had. After a few months of experimenting we began to get the hang of things. Although we developed our confidence in the process at the last minute.

OTAQUEST: I think this was also your first experience as a director in using facial capture to move an animal character, is it not?

Shinichi Matsumi: Yes. My biggest issue was how to express laughing. I started by drawing the six basic emotions as defined by Paul Ekman (an American psychologist who studies emotions and facial expressions) and then applied that to each animal individually. I figured if I could do that, then I could at least display the bare minimum range of expressions.

OTAQUEST: You’ve even got the ear movements connected with the expressions.

Shinichi Matsumi: Yeah. Expressions aren’t just limited to how the face moves, it also encompasses other things like how the ears react or how a tail might sway. I also had to take into consideration characters like Haru, who has no white in her eyes. She can’t move them around to express her eye movement, so we made her ear movements more expressive.

OTAQUEST: Was there a particular scene that left an impact from a 3DCG production standpoint? 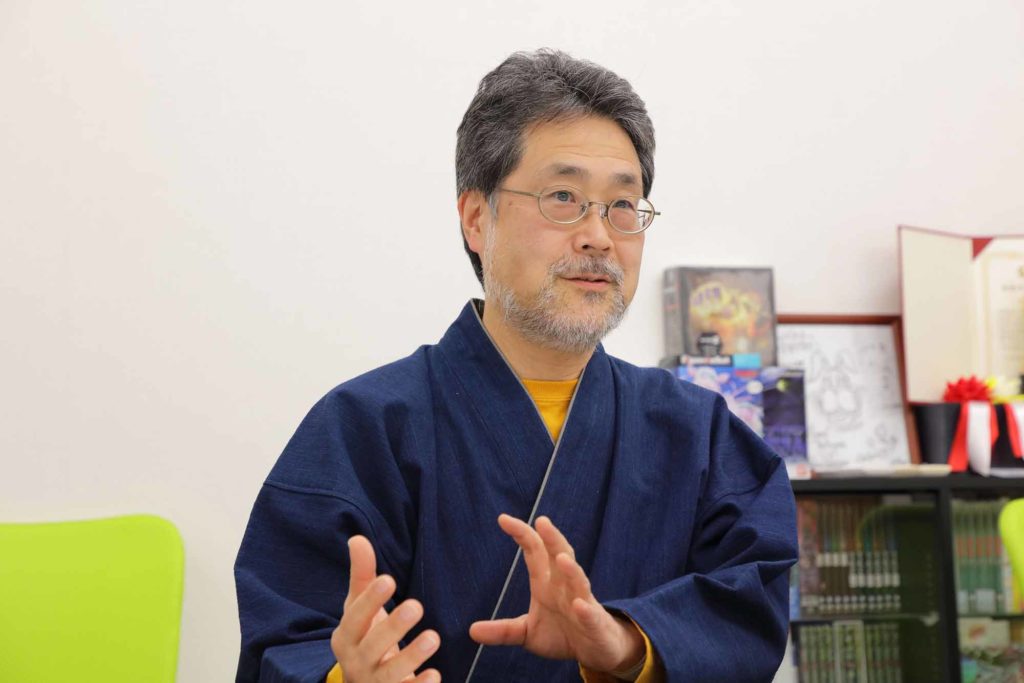 OTAQUEST: How about you, Matsumi-san?

Shinichi Matsumi: The scene where Haru and Legosi are talking in the cafeteria, as well as the scene in the hotel, had the most impression on me. Such as looking deep into their pupils, or having multiple angles on screen at once. Making sure that the monologue isn’t too loud but also keeping the scene interesting, thinking about how to actually show that was quite difficult.

OTAQUEST: I see. The reaction to BEASTARS overseas has also been really good, did you have that in mind during production?

Shinichi Matsumi: We knew that it was also going to be streamed overseas, but we had the mindset ‘this will be streamed’ rather than ‘let’s aim for the foreign market’. In the case of streaming, if the first 5 minutes of the show isn’t interesting, its likely people won’t continue to watch it. The ending is also important, to ensure they want to watch the next episode. From the beginning of the script development, we were very careful about the structure of the start and end of an episode.

OTAQUEST: Looking back at Land of the Lustrous and now at BEASTARS, I can definitely feel something new about the possibilities and the range of 3DCG. To wrap things up, is it alright if I hear your thoughts on 3DCG?

Eiji Inomoto: There still isn’t a definitive way to show things in 3DCG [in Japan], and the current strong trend is in how to make it look as close to a hand-drawn style animation. Saying so, Orange is currently exploring animation styles that are outside that trend that the viewers can most relate to. In regards to that, I’d say things relatively worked out with BEASTARS. It feels like viewers outside of Japan are more used to watching things in full CG, so they don’t feel any sort of uncanniness. I feel that we are going in the right direction.

Kiyotaka Waki: I’ve been with Orange since Land of the Lustrous, and before that, I worked in traditional animation, so I feel that I’m getting the hang of strengths and weaknesses of both hand-drawn animation and CG animation. One of the difficulties of animation is expressing characters with a very three-dimensional body frame, which is exactly why we chose to go with BEASTARS. As a company, our aim is to continue choosing projects that enable us to tackle new technical challenges, one by one, upping our quality of animation. However, we work in motion pictures so I’d like to make something that the viewers will find interesting, regardless of whether if it’s done by hand-drawn or CG.

Shinichi Matsumi: Likewise, I don’t really subscribe to limiting myself with the thinking of ‘because it’s CG’. As technology advances things we thought impossible will become possible, and the range of expressions can be expanded compared to hand-drawn animation. CG or hand-drawn styles are just different ways of expressing methods, so I would like to keep on considering the full potential of things that can be done and maximize what can be done. The important thing is to accept new things as they come out. Every day new software is being developed… I think it’s quite difficult to achieve expertise. (laughs) 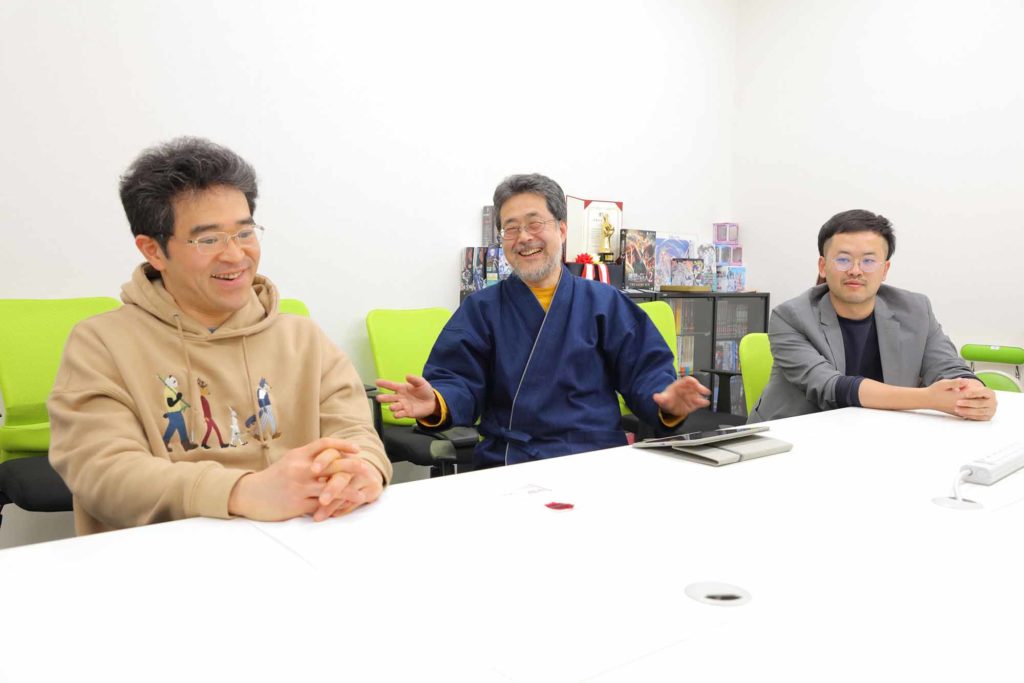 We want to thank Studio Orange and Kiyotaka Waki, Shinichi Matsumi, and Eiji Inomoto for participating in this interview! BEASTARS is available to stream on Netflix internationally.