A Guide to Studio TRIGGER: Keeping the Spirit of Gainax Alive

Studio TRIGGER is Gainax after Gainax stopped being Gainax.

Since its founding in 2011, Studio TRIGGER has produced many Gainax-ish anime series. Kill La Kill, Space Patrol Luluco, Little Witch Academia, and Inferno Cop are among their creations. They also co-produced the film Promare.

If TRIGGER’s stuff resembles Gainax, it’s because the company is essentially the offspring of Gainax.

You can’t really talk about TRIGGER without discussing Gainax. The founders of the animation studio are former Gainax employees, director/animator Hiroyuki Imaishi and director/producer Masahiko Otsuka.

Before co-founding TRIGGER, Otsuka had directed episodes of such major hits as Neon Genesis Evangelion, FLCL, Tengen Toppa Gurren Lagann, and Panty & Stocking with Garterbelt, among other things for Gainax.

Imaishi had episodes of Re: Cutie Honey, Gurren Lagann, and Panty & Stocking under his belt, and a few others.

All of these anime shows contain good examples of bouncy ‘Gainaxing’ animation, or confusing, metaphysical, and weird ‘Gainax Ending’ or a combination of both.

Gainax was officially founded in 1984, although the core group had been together before that as Daicon Film. They were university students when they started.

Probably Daicon Film’s best well-known productions are the Daicon III and Daicon IV opening animations, made for a pair of science-fiction conventions. These shorts feature a young girl who grows up to become a bunny girl who fights various copyrighted characters.

With series such as Evangelion and FLCL, the animation company very quickly gained a reputation for producing anime shows that were unusual, unique, interesting, well-animated, and thought-provoking.

Unfortunately, Gainax also had money and legal troubles. Evangelion infamously ran out of money, as Spike Spencer found out. The company was later charged with tax evasion.

Gainax would survive, but director Hideaki Anno left to form Studio Khara in 2006. This would be followed by legal battles over Evangelion ownership and royalties.

After 2011, Gainax continued to produce anime shows, although none quite as popular or cosplayed nearly as often as their previous series. Here are a couple of examples:

Medaka Box (2012) is based on a shonen manga about student council members at an academy. Magica Wars (2014) is part of a video game and media franchise. It features magical girls from throughout Japan’s prefectures.

Gainax introduced a new representative director in February 2020, after the previous one was arrested for alleged indecent acts.

Inferno Cop came out in 2012. This web comedy series features limited animation, which nonetheless seems very active and animated. It also contains over-the-top amounts of gratuitous violence and a plot that barely makes sense. Although the episodes are short, the overall feel of Inferno Cop would fit in with either Gainax or TRIGGER.

Kill La Kill (2103) was TRIGGER’s first original anime television series. It has elements of a magical girl series (the main characters are schoolgirls who wear sailor outfits, transform and fight). It parodies many high school anime concepts. For example, the school trip becomes a regional school war. It has all of the dramatic intensity of Tengen Toppa Gurren Laggan. The art style is very Gainax-ish.

Little Witch Academia (2013, also 2017) started out as a beautifully animated short film about a klutzy young witch and her friends and rivals. A Kickstarter campaign helped it avoid the Evangelion budget trap. It was made into a Netflix series in 2017. It’s a cute witch series, both in the sense of it being a series about a cute witch, and a cute series about a witch. It’s probably the least Gainax-ish show in TRIGGER’s library. 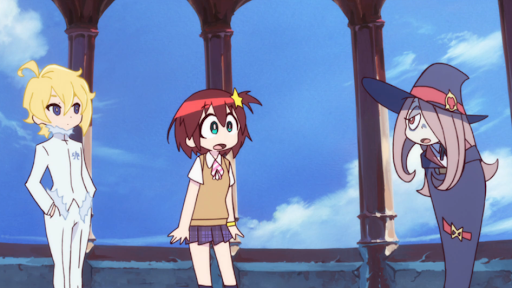 Space Patrol Luluco (2106) is a cute little oddball series. On one level, it’s just a short and fun comedy anime about a teenage girl who turns into a gun. Each episode is only about seven minutes long.

Luluco must deal with aliens and space criminals. She must also deal with her own feelings about a boy that she has a huge crush on. The teen relationship problems turn out to be just as important as the space criminals.

It gets a bit dark and angsty at times, a habit which TRIGGER seems to have picked up from Gainax.

Space Patrol Luluco would be followed by Kiznaiver, Darling in the Franxxx, SSSS.Gridman, and BNA: Brand New Animal.

In Kiznaiver (2016), a small group of students is forced to bond together. They share pain and suffering together.

Darling in the Franxx (2018) features elite young pilots in a dystopian future. Child pilots are expected to defend adult civilization from giant creatures. Some viewers have noticed that there are definite shades of Evangelion in it, although that is not always meant as a compliment.

SSSS.GRIDMAN (2018) is an anime adaptation of a 1993 tokusatsu series. A boy merges with the heroic Hyper Agent Gridman. There are kaiju to fight, and mysterious disappearances to solve. Because this is a reboot of an old series, the original creator, Tsuburaya Productions, is also involved. A sequel to SSSS.GRIDMAN, called SSSS.DYNAZENON, is expected in the near future. The people involved have released information about cast members, as well as some visuals.

Brand New Animal (2020) is TRIGGER’s latest TV anime. A boy turns into a tanuki, and learns about the world of furry creatures known as beastkin.

Promare (2019) is TRIGGER’s first full length film. It takes place in a world where some people are pyrokinetic. The story features a terrorist group, and the people who fight the terrorists.

There are strong influences of both Gurren Lagann and Kill La Kill in Promare. The same people who made Promare also made those shows. 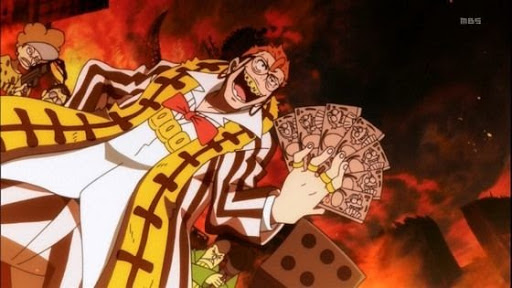 TRIGGER has a Patreon site.

For $1 a month, you can become a TRIGGER Supporter. Supporters get access to drawing files from live streams and other art scans, and can participate in the company’s surveys.

For $5 a month, you can be ‘TRIGGER Happy.’ TRIGGER Happy includes the Supporter stuff, plus more art files and the ability to vote on what animators will draw during live streams.

Other Information About TRIGGER

Studio TRIGGER is relatively new. They’ve only been around for eight years, which is not a lot when you compare it with 72 years for TOEI Animation, 39 years for Kyoto Animation, and 35 years for Gainax.

So far, TRIGGER has only made a handful of anime series. Roughly one for each year, they have been in existence.

TRIGGER has also produced animation outside of the world of anime as well. They helped Cartoon Network with OK K.O.! Let’s Be Heroes, Black Dynamite and one episode of Steven Universe. The episode is ‘Mindful Education.’ It features Stevonnie in a sword fight against Holo-Pearl, and the song ‘Here Comes a Thought.’

Studio TRIGGER is based out of Tokyo.