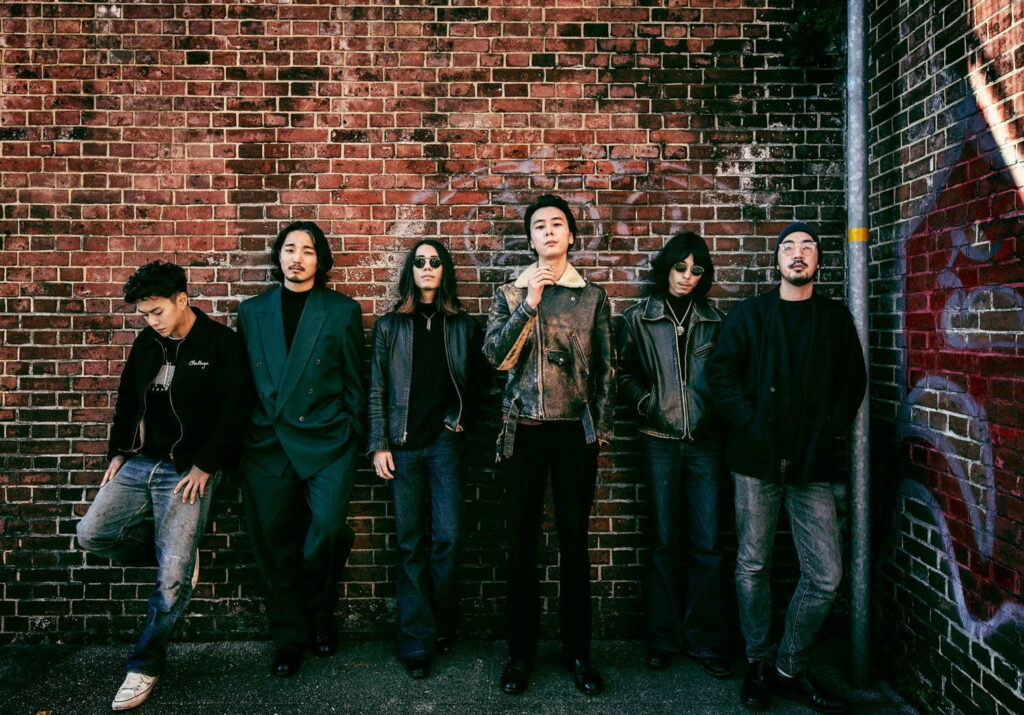 Formed in January 2013, Suchmos is a Japanese rock band that was inspired by various forms of black music such as rock, jazz, hip-hop, funk, and soul. They also make ventures into acid jazz as well. The group takes influences from various forms of music and applies their own twist on to them making something truly unique.

The name for their band Suchmos was an adaptation of the nickname that jazz musician Louis Armstrong had which was “Satchmo.” They have had their songs featured in a number of commercials, most notably Honda used their song “Stay Tune” for the promotion of their new SUV, “Vezel.”

Growing up, the members of Suchmos were childhood friends. After a long night, they all gathered at OK and Kcee’s house as they are brothers and were watching YouTube videos which caused them to want to form a band of their own.

Formed 2013, OK started the band which would later become Suchmos with Yonce, Hsu, and former member Ayustat, along with a support member named Taihei. They received their first booking offer before they even had a name for their band which was later named when Yonce was struggling at The University of Tokyo which had photos of Louis Armstrong scrolling across one of the monitors in the room.

Hsu who was a jazz student saw it as well and told Yonce that Louis Armstrong’s nickname was “Satchmo.” They liked the way that it sounded and decided to adopt it as the band’s name.

Suchmos is a six-member group with each member contributing to the sound that they uniquely portray their music with. Each member of the band has been around since the beginning in some shape or form with the exception of Ayustat who left the band in 2015.

The Major Debut of Suchmos and the Success of Stay Tune

In 2015, Suchmos was signed to Space Shower Music who released their first EP titled “Essence.” Following the release of Essence, Ayustat left the band, leaving them with a hole in their line up.

Shortly after the release of Essence, Suchmos released their first studio album “The Bay.” The Bay performed fairly well on the Japanese Oricon and Billboard charts placing 26th on the Oricon Chart and 16th on the Billboard Japan Top Album chart.

The year of 2015 would prove to be a pivotal year for the band as it saw them win a number of awards such as the Best New Artist award on the Apple Music “Best of 2015.”

2015 also saw them host their first independent event titled “Suchmos the Blow Your Mind vol.1” at Roppongi Super Deluxe in Tokyo. It served as an event that Suchmos could invite artists that they respected and enjoyed to have an opportunity to perform at.

Following the release of Essence in 2015, they released their second EP on January 16th, 2016, titled Love&Vice. Love&Vice placed in the top 15 on the Oricon charts and 1st on the Apple Music General Album chart.

As mentioned previously the lead single off of this EP “Stay Tune” was a major hit for the group as it was picked up by Honda to be the lead song for their upcoming SUV, the “Honda Vezel.” The song reached the top 10 rankings on the Billboard Japan Hot 100 and served as their first top 10 rankings for the major music charts.

Hot off the success of Stay Tune, they embarked on their first Japan-wide tour, “Tour Love&Vice.” After their tour, they hit the studio and started work on their third EP, “Mint Condition.”

Mint Condition released on July 6th, 2016 with the music video for the lead song “Mint” winning the Best New Artist Video at the 15th MTV Music Video Awards Japan. The song had a ranking at 16 on the Billboard Japan Hot 100.

The Peak and Change of Suchmos – The Kids, The Ashtray, and The Anymal

After the release of “Mint Condition,” the group knew that they had to do something different to maintain their position in the music industry and released their second studio album “The Kids.”

After their peak on the Oricon charts, the group seamlessly faded into the darkness with not many people talking about them and a sudden slowdown in their releases.

They released a mini-album titled “The Ashtray,” but this did not garner them the same attention and success that their previous releases had provided as they had only achieved the number two spot on both the Oricon and Billboard charts.

Again, knowing that they had to do something different, they completely changed up their musical style and released “The Anymal” in March of 2019, this change might not have been what the group needed because again, they only placed fourth on the Oricon charts and second on the Billboard charts.