Summer Time Rendering by Yasuki Tanaka is taking over an actual abandoned island somewhere in Wakayama prefecture to stage a real escape game in collaboration with SCRAP. This was originally announced back when the series ended serialization on Jump Plus, but we didn’t know the specifics: now, we know that this real escape game is indeed very real… in more ways than one!

100 lucky people could be in with the chance of participating in this very real Summer Time Rendering real escape game, provided that they fill out a special form to enter the competition. If chosen, participants will gather at 11 a.m. on 22 July to travel to Tomogashima: a cluster of four islands just off the coast of Wakayama City. Although currently uninhabited, it was once home to a sect of Buddhist monks who practiced the art of shugendo in the seventh and eight centuries. There are also some abandoned Meiji-era fortresses on there.

Participants will then explore the island, looking for clues and hints that might let them escape. SCRAP have run their fair share of escape games in the past, but none so real as this: it’s honestly surprising to see a series such as Summer Time Rendering get this treatment, even though an anime is on the way. It’s hardly well-known, but the theme of the escape room does fit the setting of the series very well. 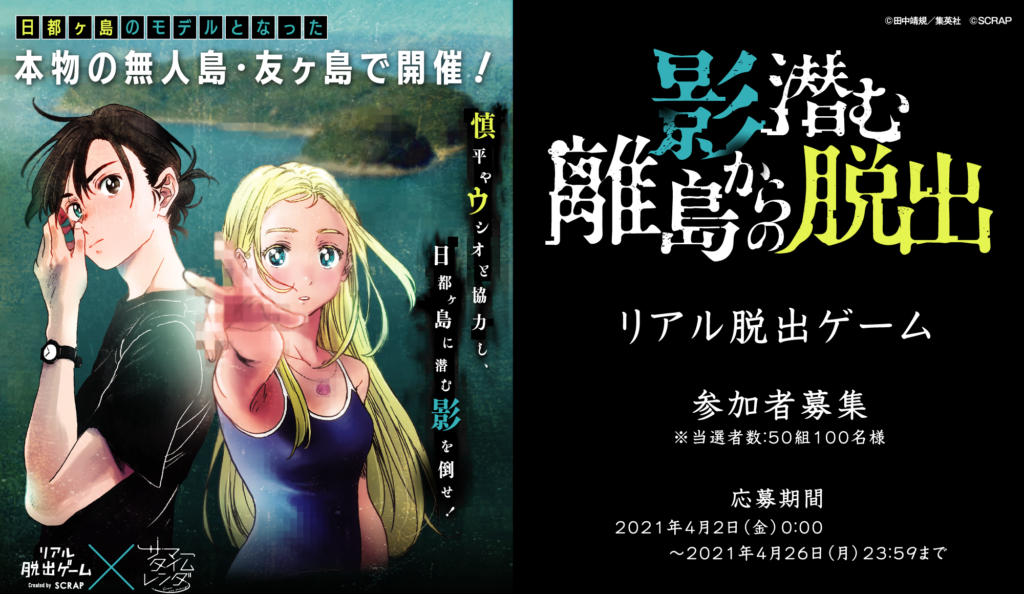 Summer Time Rendering follows protagonist Shinpei Ajiro as he attempts to uncover the mysteries behind his childhood friend’s death after returning to his hometown of Wakayama. As a result, this escape game appears as if it will allow you to enter into his state of mind in a visceral way; a little too much, perhaps? Let’s just hope no casualties are involved.

You can read Summer Time Rendering in English via Manga Plus and apply for the real escape game via the official website. It doesn’t say anything about international applicants not being allowed, but please be aware that foreign nationals cannot enter Japan right now because of COVID-19 restrictions.