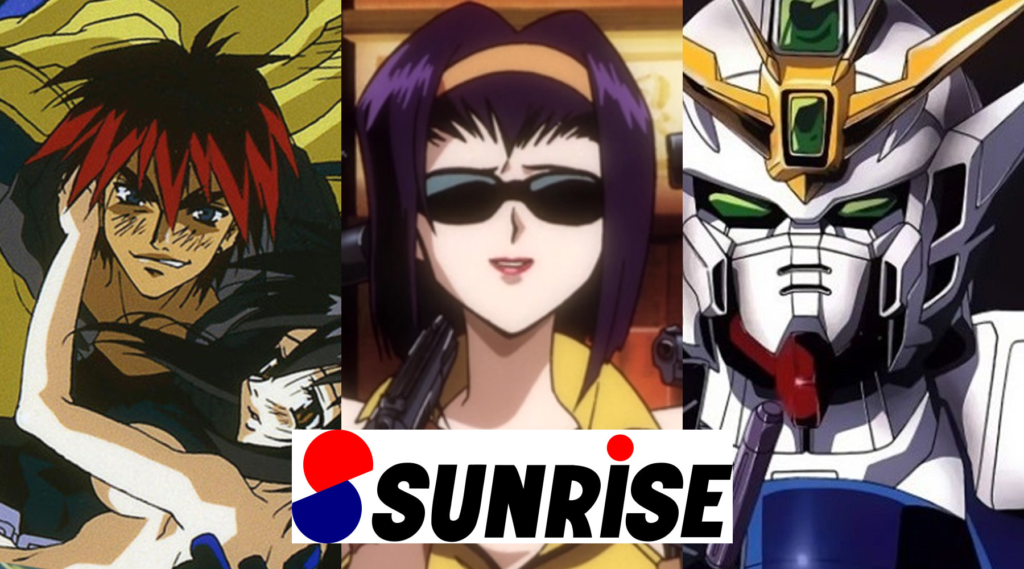 Mecha with feathered wings, cowboys and outlaws dogfighting in the stars, a gosh darn robot Olympics. With ideas as fun as they were expansive, the animation studio SUNRISE dominated the 90s sci-fi landscape with a string of anime released that strongly, but not exclusively, endeared themselves to a growing sentiment of western anime-appreciation.

Aside from the big Shonen Jump stuff and Sailor Moon, much of what comprised the Toonami generation’s diet came to fruition via a studio that three decades earlier shot itself from Osamu Tezuka’s Mushi Production. SUNRISE’s philosophy of teams of producers, instead of individual creators, should spearhead anime.

Whether you agree with creation as marketing, so many of the greatest anime of all time were ultimately crafted to sell a bunch of toys. Obviously, as the results will argue for themselves, that doesn’t mean the creatives involved didn’t care about the shows they animated.

Mobile Fighter G Gundam wasn’t the first Gundam of the 90s, but with viewership down on 1993’s back to basics Victory Gundam, the toy companies sponsoring the show wanted something more marketable to the kids: the Dragon Ball Z of Gundams show manifested itself.

It marked a lot of firsts for the franchise, tagging in Yoshiyuki Tomino’s protege and future Giant Robo director Yasuhiro Imagawa, who’d then drop Gundam’s continuity up until that point, creating the first alternate universe and ‘super robot’ Gundam series. Not so conventional 90s sci-fi.

Controversial amongst hardcore fans for dropping much of what made Gundam Gundam, its defenders love it something fierce, and that includes us.

G Gundam’s departure from the norm only netted SUNRISE and their investors’ moderate results, so for Gundam Wing they wanted something closer to the original vision but with a, then modern, cool 90s sci-fi anime sensibility.

Producers at BANDAI also specifically wanted a Gundam that transformed into a plane, and boy they got it! While New Mobile Report Gundam Wing (Japan title) met similar results as its immediate predecessor it eventually would go on to start the trend of ‘certain SUNRISE anime being much more popular in the west than at home.’

It wouldn’t air in the west until 2000s, but when it did it immediately rose to the top of the Toonami block’s ratings, substantially at that.

Like Mobile Suit Gundam Wing, 08th MS Team was something of a sleeper 90s sci-fi classic, but that’s in part because of the OVA taking three and a half years to get all 13 of its episodes out. Granted, part of the time resulted from an unfortunate and fatal car accident involving the project’s director Takeyuki Kanda.

Despite the tragedy and the results production delays, fans of the show swear by the  story-telling in the completed work. SUNRISE opted to create a band of brothers’ tale in the original Universal Century canon, peppering in some romance with the Zeon opposition along the way that succeeded in hitting degrees of complex emotional resonance the franchise had never hit before.

Sure much of SUNRISE’s best efforts in the early to mid-90s went to their darling cash-cow Mobile Suit Gundam franchise, but the expertise and daring they gained experimenting with it allowed the studio to continue and further elevate their string of 90s sci-fi Smash Hits.

Hell, The Vision of Escaflowne was conceived after Macross creator Shoji Kawamori quested around Nepal, telling the studio ‘Hey let’s mix up Robots with, uh, the cultural practice of divination’. They said yes, and director Kazuki Akane opted to throw in some shojo flare with the help of character designer extraordinaire Nobuteru Yuuki… and it worked.

At the time it aired, Escaflowne’s most vocal fans seemed to be junior high school girls, particularly rare of a mecha audience, but like Gundam Wing before, it grew a giant reputation overseas by pumping up those global VHS sales.

And all that despite the terrible Fox Kids edit!

By 1998, SUNRISE had production down to a science. Outlaw Star was quite a success for SUNRISE from the start. Involved with the planning of its original manga, which predated the anime by a year and a half, its first volume sold out across Japan.

Lightly incorporating elements of Chinese culture into the show, and once again tapping the legend Shoji Kawamori for some involvement, the anime would become a venerated 90s sci-fi classic.

It didn’t underperform in Japan by any means, but western fans especially welcomed this colorful and heady space adventure into the fold, evidenced by roughly 100,000 fans voting for it to come back to Toonami after it finished airing.

That ‘nobody knew Cowboy Bebop in Japan before it became popular in America’ is a myth, as the show was winning awards within a year of airing. No denying that it holds a special place amongst global anime miasma though, with the critical and fan consensus alike deeming the show not just a 90s sci-fi success but an all-timer for the entire medium of animation.

People often don’t realize this series also exists thanks to Toy Company sponsors ‘wanting a show with a spaceship’ and the details being kinked out after, but SUNRISE assembling an all-star team lead by Shinichiro Watanabe, who treated every episode of Bebop’s production like a feature film, landed in something quintessential.

Rounding out our definitely incomplete list comes SUNRISE’s The Big O, a show whose popularity in the United States alone got it a second season, full on co-produced by Cartoon Network. Years later, FLCL would replicate this, to lesser results.

20+ years later, a cult reputation still lingers over The Big O, with its unique blend of Batman: The Animated Series and H.P. Lovecraft influence courtesy of Chiaki J. Konaka, the fantastic writer behind Serial Experiments Lain.

We don’t consider it just a semi-hidden 90s sci-fi gem, but the last great 1990s anime. It was, however, made to sell toys. Just like the rest of these shows.