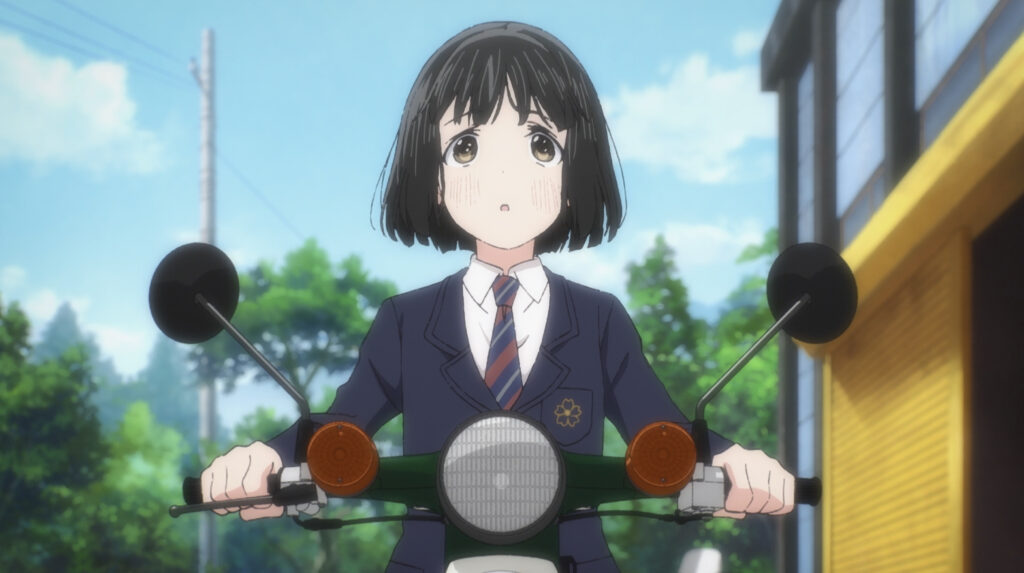 There’s a particular scene in Super Cub episode 1 that jumped out to me upon my initial viewing:

Without family, friends, hobbies, hopes, or even a dream for the future, a routine of waking up, going to school, and returning home is all that punctuates the daily life of Koguma. It’s a solitary existence the creators of the series made a great effort to emphasize in the opening moments, without feeling exploitative of the depression the character is going through.

The first few moments are silent, slow, moody panning shots on Koguma’s empty apartment and the Japanese countryside. Her apartment is clean, filled with glistening silverware and neatly organized cooking utensils, but little that suggests a person is living there. To be fair, Koguma’s time in the apartment is more an existence rather than a life. Outside her room, the shots of empty train platforms and fields are pretty, but are just as drained of color and life as everything else, even as flowers beam in supposed full bloom. 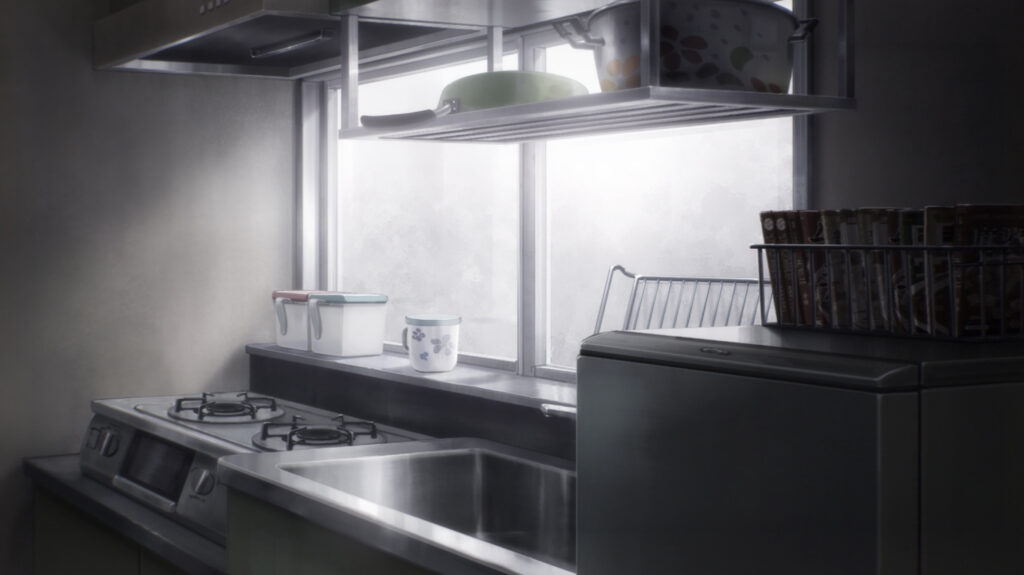 Koguma’s introduction is solemn and necessary: the picture of someone with no one to rely on but themselves. Food is necessary sustenance, not something this ghost to the world would savor. A simple ride on the bike to school is monotonous, occasionally sparking into life when seeing other people go by in cars or on mopeds.

We only begin to see the slightest flicker of emotion on her face when a moped drives past, a feeling that eventually leads her to a small, derelict motorcycle store. While her mechanical thought process took her from seeing the vehicle as a positive investment to a costly money sink, that changes when she gets offered a used Super Cub, that supposedly killed multiple riders, for just 10,000 yen. Giving it a test ride, everything changes.

The dull color palette gives way to a bright summer sky, luscious greenery, and a refreshing breeze that changes their outlook. Suddenly, things feel a little less claustrophobic and bleak. Borders have been knocked down, and the closed walls give way to open roads and an environment just begging to be explored. The sky is the limit.

For the first time, thanks to this bike, we see Koguma smile. 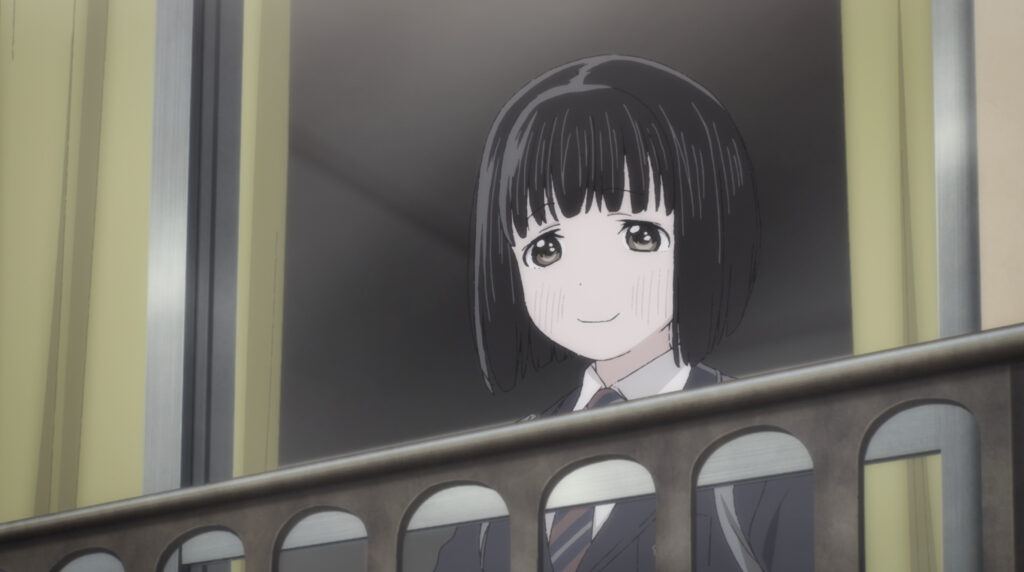 This visual storytelling in Super Cub episode 1 is basic, yet it’s also something that’s unfortunately rare within the medium of TV anime. Alongside most anime being mere adaptations of other mediums as opposed to the strength of original made-for-anime properties, many titles have an unfortunate rigidity to their source material. By acting as a promotion for the original series, unless you’re a series like The Promised Neverland, you’re likely going to create a series that sticks to the storytelling conventions of the source medium.

Manga is filled with static panels, whereas light novels are non-visual by design, bar the occasional illustration. The tricks of the camera, like blocking, framing, color-grading, editing, and more, are tools that aren’t available in the same way to these creators. Strict adaptations fail to consider how anime can enhance the original story, instead of simply retelling it with motion and voice acting.

Comparing chapter 1 of the Super Cub manga to episode 1 of the anime showcases a clear consideration of how the original light novel has been adapted to two vastly different visual mediums in different ways. While the manga sticks relatively close to the story of the light novel, its retelling has more dialogue and narration to introduce the fact that Koguma is alone. The result is someone who feels less alone (she has support from a school administration that’s visibly absent in the anime) and is less isolated.

The color panels for the first chapter, similarly, are bright and vibrant. She’s lonely, but not alone, and her decision to purchase a moped feels less important as a means to escape and move forward in life in the way the anime portrays it. 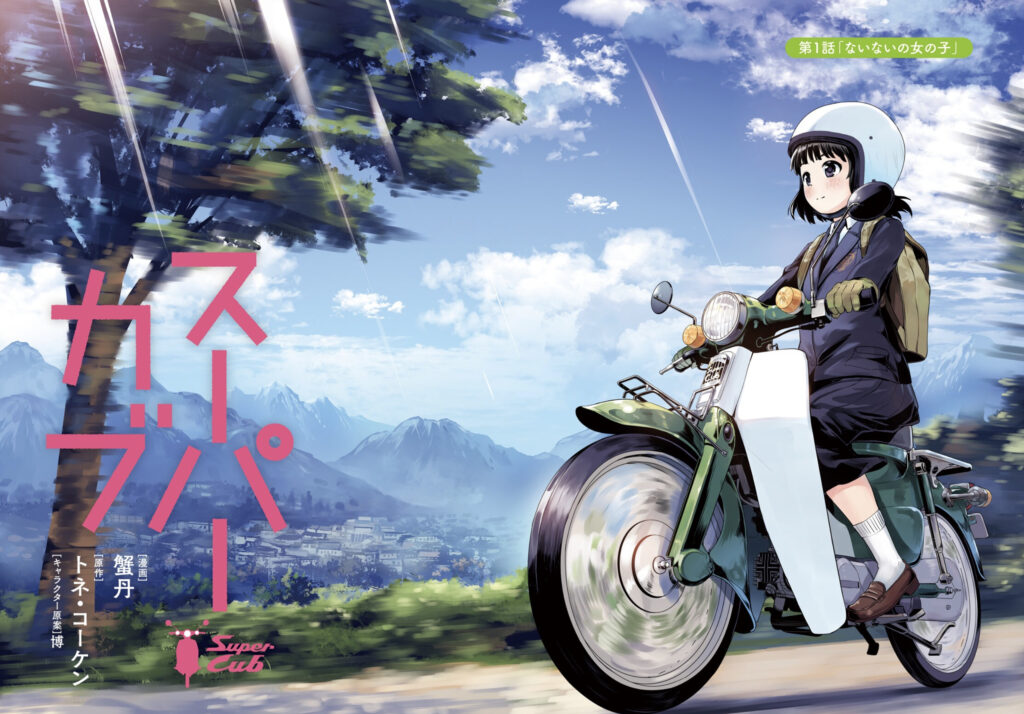 The result? A far more personal story. Episode 1 of Super Cub features just one character in Koguma, alongside the motorbike salesman. Over the course of 20 minutes, we’re put into her state of mind as we feel the pain of her abandonment, which gives us the thrill of a lifeline that the Super Cub provides. It’s a feeling that spoke to me closely, and as a self-contained story, it’s probably the best first episode of the season so far.

It’s difficult to know where the series will go from here. Although the other characters are yet to be introduced, this is still a slice-of-life show (a genre I enjoy, but many don’t), and I can imagine a more strict source material adherence when it reverts to that formula. It’s also hard to ignore Honda’s place on the production committee, who sure are doing their best job to emphasize the benefits of mopeds. At best, these moments are interesting, but not not the main draw. 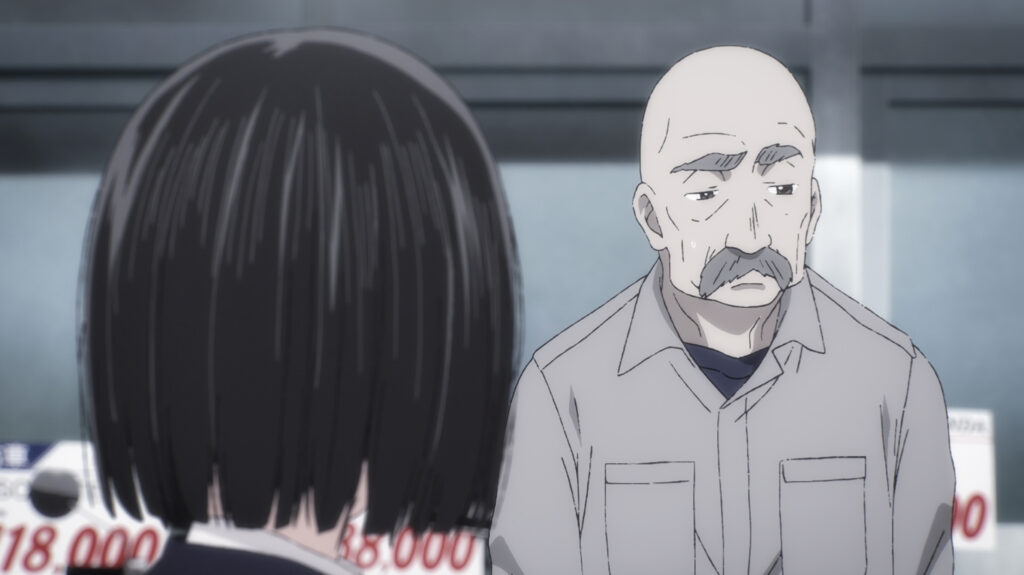 I can easily recommend this first episode to everyone. Whether the rest of the show will live up to these strengths remains to be seen.