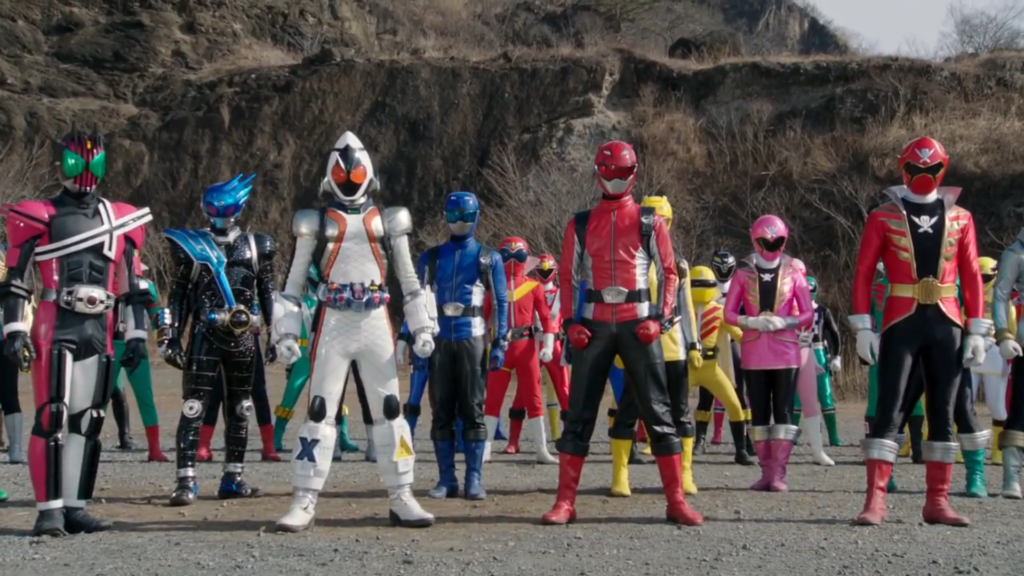 For its 45th anniversary, you’ll find the seminal Super Sentai franchise, most famously pilfered to create American Power Rangers content, drastically twisting up their formula for the upcoming Zenkaiger entry. 2020 saw a slow but steady roll out of classic Kamen Rider seasons onto the western streaming market for the first time. Hideaki Anno’s Shin Ultraman looms in the distance atop the clouds, but its descent comes soon. While tokusatsu‘s always enjoyed a small but dedicated fandom amongst the world’s English speakers, we might be on the eve of a fandom spike. Perhaps because of all the news you’ve found yourself Toku-curious as of late, but between the combined 1 billion shows between the Kamen Rider and Super Sentai franchises, you have no real idea where to begin. Which world do you explore first, and which entry? If you’re understandably paralyzed with indecision about which kids TV show to introduce yourself to, might we suggest the loud, the bombastic, the over the top crossover film Super Hero Taisen?

Super Hero Taisen predates the original Avengers movie by two entire weeks, and writing about the film 9 years later makes referencing an equally old film super relevant. Associated in spirit from birth, both created by manga god Shotaro Ishinomori, the Kamen Rider and Super Sentai franchises had long flirted with each other over the years, and indeed Toei marketing geniuses whipped up some smaller scale cameos and team-ups well before 2012. In retrospect, it’s surprising it took Toei three decades to dole out a full-scale collaborative bash that existed in the head of Japanese children for years untold, but the benefit of waiting allowed the creators to group hundreds of distinct, suited-up actors on screen at the same time. Marvel dreams of having the Sentai/Kamen Rider roster, and the poster above barely scratches the surface.

Just about every single ‘Power Ranger’ and ‘Masked Rider’ makes, at least, a cameo appearance in Super Hero Taisen. No, most of their actual character actors don’t appear, but it’s still impressive to think about Toei scrounging up hundreds of extras to duke it out donning Halloween costumes smack dab in the middle of some empty canyon. The film does center around a few Super Sentai characters and some Kamen Riders to boot. The premise sees Captain Marvelous, the leader of the Gokaigers pictured above, attempting to eliminate all Kamen Riders, while Kamen Rider Decade down below aims to eliminate the rangers! Both of those shows had finished up airing well before the film, so you’ll see the casts of Kamen Rider Fourze, Tokumei Sentai Go-Busters, and a few other fan-favorites of the later Heisei era shows. Kind of like if a Wikipedia article about Super Sentai was its own film.

Getting a who’s who of the Toei tokusatsu multiverse is one reason to watch Super Hero Taisen, but that’s not the most important one. The highschool yearbook of Sentai faces is nice, but it’s how well Super Hero Taisen captures and then summarizes the essence of both franchises that makes it the perfect introductory pit. While both shows have aired back to back on the adorably named ‘Super Hero Time’ segment for 21 years now, they do differ subtly in tone: Sentai’s skews a little more all ages, unabashed with its over-the-topness, while Kamen Rider historically finds itself a little more serious and story-based. Both ultimately exist to sell toys, of course, but the film surprisingly captures what people young and middle-aged alike enjoy about both worlds. You have Super Sentai‘s non-stop zentai suit martial arts action more kinetic than ever, with the more ‘cool’ aesthetic and tone of Kamen Rider peppered in. Gun to our heads, we would call this one a Sentai movie at heart, but it tantalizes why some people take Kamen Rider a bit too seriously.

Super Hero Taisen did split adult tokusatsu fans down the middle when it came out. Clearly being a huge-crossover, the intentionally silly kids movie wasn’t serious enough or true enough to the various shows’ characters for some. And sure, Super Hero Taisen neither is the second coming of Perfect Blue nor a hugely important work in the canons of the dozens of shows represented in the work. What it is though is a whole lot of fun. While Power Rangers stories are quite literally made for children, when done right, some of that fight choreography looks great. The Kamen Riders in particular ride (ha ha) through with enough personality that even though the capital P plot of this All Ages Film isn’t anything to write home about, they’re played with a surprising amount of charisma.

Super Hero Taisen is a crash course in tokusatsu that’s an extremely memorable viewing experience in its own right, and there is no better place for newcomers to start their journey.

If you find yourselves liking the adventures of heroes in spandex, here is where you can legally watch some tokusatsu series.