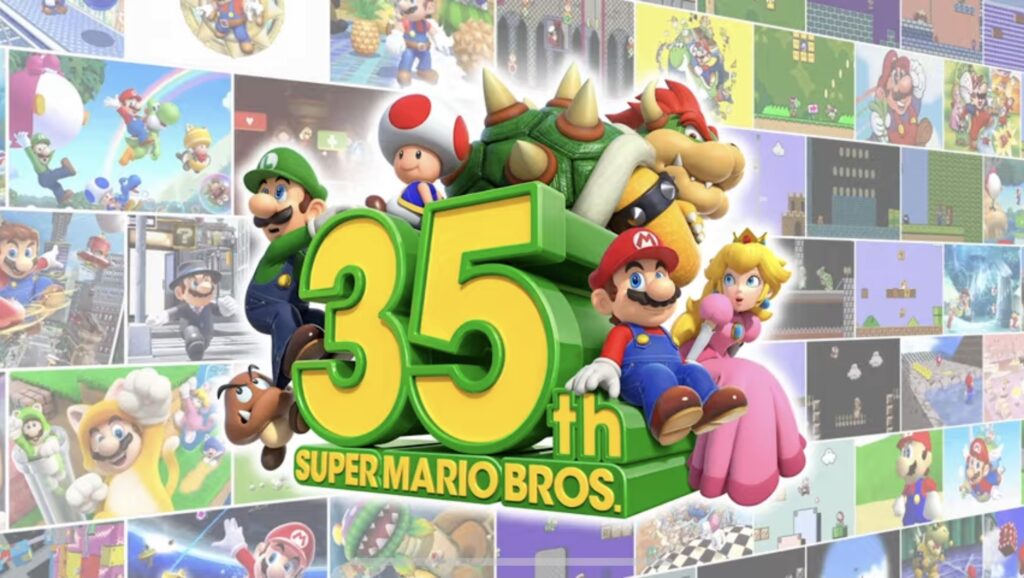 This year marks Mario’s 35th anniversary, and yet until now Nintendo has been silent on their plans to mark the plumber’s big anniversary year. We’ve had a Mario Lego set, sure, but that wasn’t advertised as being a 35th-anniversary tie-in release, and we’d heard nothing else other than that. This is Mario we’re talking about here! With rumors swirling, Nintendo broke silence with a surprise Mario-themed Nintendo Direct which lifted the lid on the company’s plans for a plethora of 35th-anniversary celebrations.

The first announcement of the Mario 35th Anniversary Nintendo Direct sees a return to Mario and Nintendo’s origins; literally! The Nintendo Game & Watch was a series of portable Nintendo consoles each themed around a single character. A precursor to the Gameboy, this also saw Mario’s first handheld gaming appearance with multiple Mario appearances in the lineup including a version of Mario Bros.

Although the NES Super Mario Bros title was not one of the game’s featured in the Game & Watch series, that’s about to change with a brand new Game & Watch system featuring the game. Designed to look like older systems in the lineup, this is pre-loaded with the original Super Mario Bros that helped propel the character to fame and fortune. There’s also some hidden features on the device as well and it will also function as a clock. The device will be made available in limited quantities starting November 13th.

The next announcement is one I’ve personally been waiting for for a very long time: a port of Super Mario 3D World to the Nintendo Switch. This was a rather different kind of 3D platformer than is traditionally associated with the Nintendo mascot character, with the gaming having more in common with its 2D brethren than games like Super Mario 64 and Super Mario Galaxy. A successor to the 3DS game Super Mario 3D Land, the addition of the cat suit and HD graphics gave this diorama-like worlds a new lease of life, with tight and clever level design helping create what I feel is the best game on the Wii U. It was a crime to see the game not make the jump to Nintendo Switch, and I’m glad to see that it will finally do so soon.

This will be an enhanced port of Super Mario 3D World, bringing with it DLC in the form of Bowser’s Fury. What Bowser’s Fury is at this point in time is anyone’s guess as all we have seen is a frozen landscape which appears to be its setting. Based on this, however, the DLC could be a departure from the base content of the game and offer 3D World mechanics in an open-world environment. This was teased briefly in some open areas of some levels, but this would see that taken and expanded to an entire mode. Admittedly this is speculation, but I can’t help but feel excited.

Super Mario 3D World + Bowser’s Fury will be released on Nintendo Switch on February 12th 2021, and Cat Mario and Cat Peach amiibo figures will also be made available alongside the game’s release.

Perhaps the most surprising announcement is the news that a Tetris 99-style edition of the original Super Mario Bros game will be released on Nintendo Switch. Proving the malleability of the classic title, this online vs game sees players competing against others to come out on top. To do so, players must collect coins and defeat enemies as they progress through the level, with any enemy defeated being sent to the other players game in order to mess them up. A rather odd title, but intriguing nonetheless, Super Mario Bros 35 will be available exclusive to Nintendo Switch Online members from October 1st.

The next announcement in this Mario 35th Anniversary Nintendo Direct is a new Mario Kart game for Nintendo Switch… sort-of.

Mario Kart Live: Home Circuit is an interactive toy that connects with your Nintendo Switch in order to turn your home into its own Mario Kart race track. Each toy has a special camera attached to the top of it that allows it to see the world around you, with this being sent back to your Nintendo Switch in real time. Other racers are then populated onto the track created using your environment on the console, from which you can race against these AI opponents to try and win. Items can be used to hit other racers, creating an overall unique AR gaming experience.

As it interacts with the real world, you can put real-world obstacles into your toys path that interrupt the race, which adds a new dimension to the race.

While clearly geared towards younger audiences, this is an incredibly cool toy for all ages. Mario Kart Live: Home Circuit launches October 16th.

A number of special events are taking place between now and March 2021 to celebrate Mario’s 35th anniversary. This ranges from in-game events in titles like Mario Kart Tour, Super Smash Bros Ultimate and Super Mario Maker to merchandise like pins and clothing. A Mario-themed Splatoon Splatfest is coming with physical merchandising for your team, Mario furniture will come to Animal Crossing, and that’s just the start. Major brands will be collaborating as well, with more to be announced. I’m a particular fan of the BlackMilk dungarees!

Players won’t have to wait long to get their hands on the game, either, with Super Mario 3D All Stars releasing on Nintendo Switch in 2 weeks time on September 18th. A limited physical and digital run of the game will be made available, with both versions only being made available until March 2021. This personally seems like an odd decision to me, but it does create a sense of urgency and celebration to the game.

Nintendo may have waited to announce how the company planned to celebrate Mario’s 35th anniversary, but this Mario Nintendo Direct show’s they didn’t forget about the mustachioed plumber!