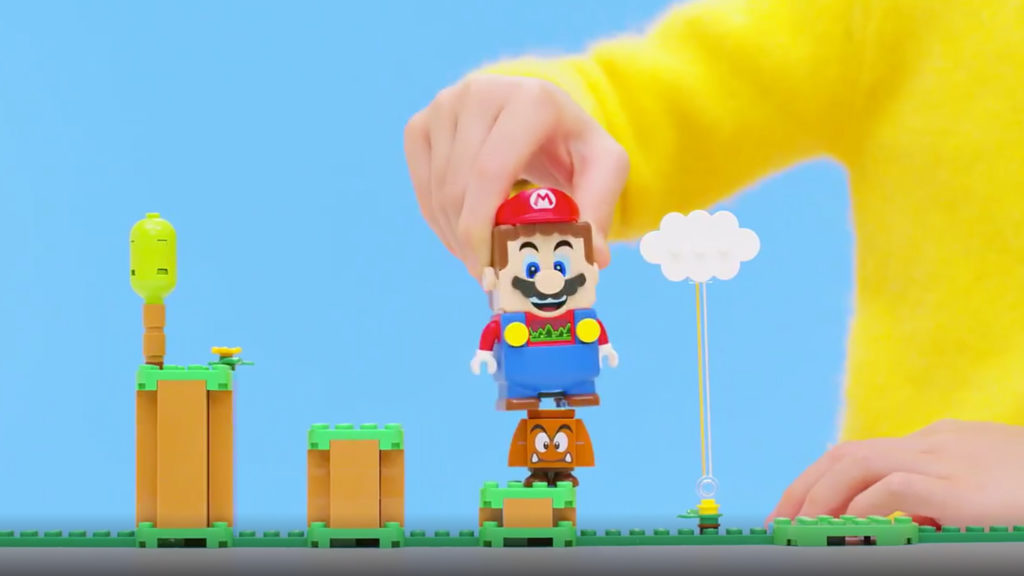 Yesterday I wrote up a piece about Lego & Nintendo teasing a collaboration featuring the Super Mario property. I don’t think anyone was expecting more information on the collection so soon, but today Nintendo dropped a trailer with a full look at the product and it looks amazing.

As I had written yesterday, it appeared as though there would be some kind of electronic component to the set, but I wasn’t prepared for what’s been shown. As speculated, the Mario “minifig” (if you can even call it that) has a screen incorporated which gives animation to his eyes and mouth, and adds a small screen to his chest which shows different information. The importance of this screen is in the concept of the product, which appears to be focused on creating stages for Mario to traverse through, complete with power ups and obstacles. Mario’s chest displays a timer, and as the figure comes into contact with different blocks on the stage there are interactive elements ranging from collecting coins to taking damage. Question mark blocks even appear to be able to have random effects in place. Mario plays sound effects and music as you’re playing with him, and as he reaches the goal his chest screen shows a final score.

While this still isn’t a TON of information, this is more than enough to get imaginations running wild. The video shows lego versions of Yoshi, Goombas, Bowser Jr. and Piranha Plants so maybe we’ll be seeing multiple sets with different elements and obstacles hit the market? Will there be a matching Luigi figure to go along with Mario? What about Princess Peach, Toad, or Toadette? Will Lego give the fans what we all want and make a Waluigi element as well? Only time will tell. Until then, I’m already unbelievably excited for this. I wasn’t expecting the interactive elements, and this already looks to have potential to be fun for all ages. I just hope that Lego & Nintendo have even more up their sleeves because this is a truly novel idea and one that could result in some seriously big changes to the way people think about playing with plastic bricks.