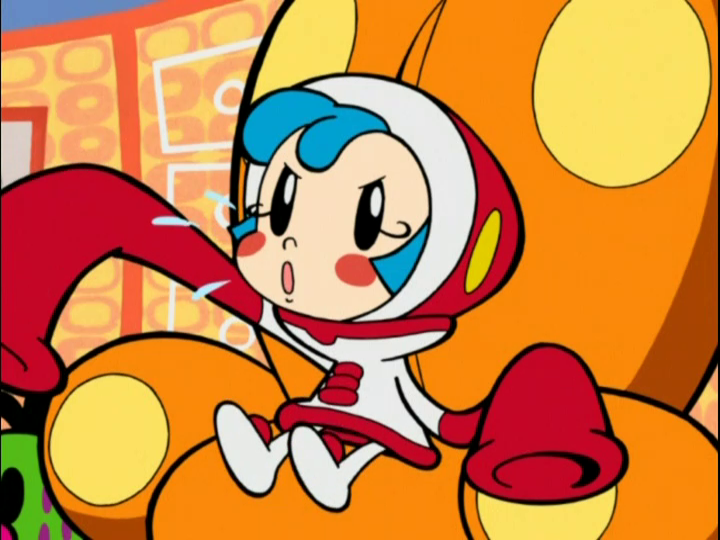 You might have vague memories of watching Adult Swim in late 2004 early 2005 and watching a shrimpy little girl repeatedly call a kind looking robot a Dumbass. That’s Super Milk Chan, an offbeat anime comedy from the early 2000s that in retrospect seems like a precursor to shows like Inferno Cop and Panty & Stocking. A comedy anime that looks and acts more like a 1990s era Cartoon Network or early Adult Swim Cartoon than your average anime. No wonder it eventually aired on Adult Swim.

Milk-Chan herself was a nonsensical girl who went on nonsensical adventures to save the city or the world from nonsensical threats. Genuinely funny, it’s the type of show your friends would call you a weirdo for watching but after an episode would end they would want to watch the next.

Being composed of two series of short episodes, Milk got a unique release in The United States as The Super Milk Chan show although only Oh! Super Milk Chan aired on Adult Swim.

We’ll get into the show itself and how it was released.

You Dumbass! One Hell of a Catch Phrase.

Imagine a small, foul-mouthed, blue-haired, full of herself child yelling You Dumbass! at you over and over and over. If you can picture this comically aggravating situation, you’ve pretty much seen the show.

Milk herself doesn’t care who she insults from her best friend slash robot housekeeper pal Tetsuko to the ‘president’ who calls her to save the day time and again. Even slightly piss her off and say something disagreeable to her? A You Dumbass! flies your way. In real life, you would want to put this petulant child in a trash can or perhaps drown her in a well.

However, as the star of the show you put up with her antics because let’s be honest, they make you laugh. Maybe the most interesting aspect of the You Dumbass! dynamic is how it sums up the entire show; Milk doesn’t care what you think but if you don’t agree with her, you are in fact a dumb ass.

What Was The Super Milk Chan Show?

The Super Milk Chan Show was a unique Frankenstein hybrid of two separate anime and live-action footage created by ADV films for Milk Chan’s DVD release. Episodes of both the original 1998 Super Milk Chan and the 2000 Oh! Super Milk Chan would play in between segments of mockumentary style ‘behind the scenes footage’ at ADV Films.

Whoever penned the scripts and edited the project together at ADV did a commendable job and if you appreciate English voice acting in anime, it’s a unique project all should check out.

And Why Was Oh! Super Milk Chan Special?

Originally produced in Japan in 2000, Oh! Super Milk Chan was the Milk Chan show that aired on Adult Swim in 2004. ADV actually dubbed the series over twice; One version with all the Japanese references and jokes intact, and the other with a liberal adaptation that American audiences would have an easy time understanding.

In the second, ‘American’, dub they actually gave Tetsuko the Robot a harsh smoker’s voice in contrast to her high pitched feminine tone in the original. For whatever reason, the dub that kept all the Japanese references intact was the one that aired on Adult Swim.

Happening 15 years ago, why ADV and Adult Swim made that call was history but maybe the show would have caught on more if they aired the more TV-14 oriented English dub.

When ADV Films, the company that licensed the two Super Milk Chan shows and edited them with a ton of live-action footage to create The Super Milk Chan Show, fell under it seems like our petulant blue-haired child went down with the ship.

More than a decade has passed since Milk Chan was readily available for audiences to watch. We assume that because The Super Milk Chan Show was a combination of two separate anime as well as hours of in house produced live-action footage, licensing rights are particularly complicated.

Maybe someday a streaming service might try to license Super Milk Chan and Oh! Super Milk Chan separately, but we’re not holding our breath. Old DVD copies are still out there though if you’re curious.

My Hero Academia is Coming to Toonami on May 5