With Super Nintendo World opening at Universal Studios Japan in less than a month, a release of new information has detailed how the park’s Power-Up Bands work, info on the in-park features like boss battles, and the merchandise fans can purchase while adventuring through the land.

Super Nintendo Land is a Mario-themed theme park dedicated to immersing fans in the world of Nintendo and Mario, and with the grand opening growing ever closer, new information about what visitors can do and see when they arrive has been released. Following on from the unveiling of the Mario Kart attraction and recent Miyamoto tour, a new website has opened that details the mysterious Power-Up Bands and more.

First up, attractions. While we know about the Mario Kart AR attraction from previous previews, we now know what to expect from the Yoshi’s Adventure attraction that will also open at the park on the same day. Allowing visitors to ‘hop on Yoshi for an adorable adventure’, the attraction asks guests to travel on a scenic view through the Mushroom Kingdom on the search for Captain Toad. The aim of the adventure is to find three mysterious eggs on your travels, with the ability to take a souvenir photo of your adventure with Yoshi to take home with you.

Compared to the non-stop thrills of the Mario Kart attractions, this is a more relaxed ride aimed at the whole family, but with the attention to detail put into ensuring the park feels like walking into the Mushroom Kingdom itself, it should be fun no matter your age.

While these may be the only two rides available at the park on opening, Super Nintendo world is designed to be an attraction in and of itself, through the purchase of optional Power-Up Bands. While this is a significant 3200 yen charge on top of the price of a ticket, these bands allow you to collect virtual coins hidden around the park. Connecting to the USJ smartphone app allows you to rank your scores on leaderboards and unlock achievements. The biggest augmentation of the experience comes from the key challenge, which tasks guests with collecting three keys from around the park. Doing so allows you to take part in the ‘final challenge’, a boss battle with Bowser Jr! 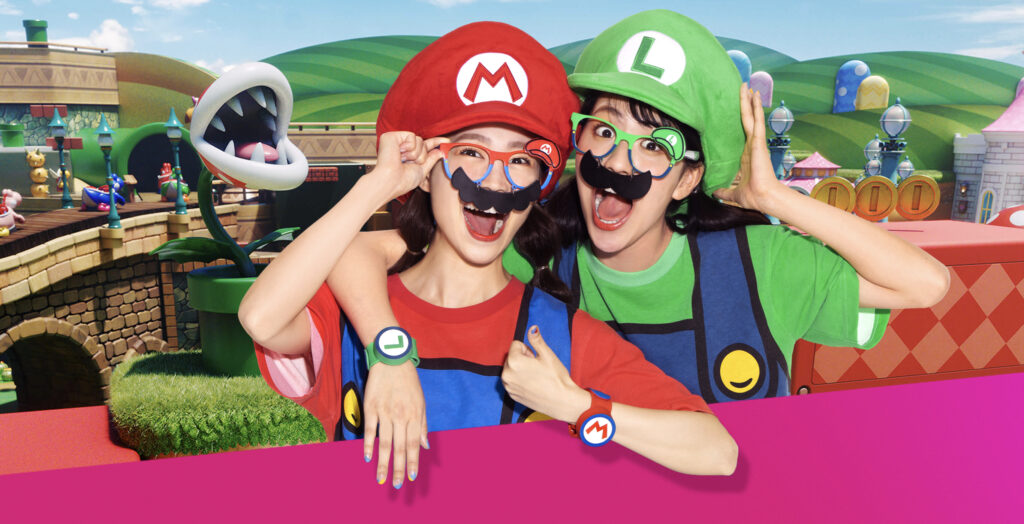 Of course, any visit to a theme park isn’t complete without a fun souvenir, and a preview of the merchandise on offer includes plush hats, glasses, gloves, t-shirts, cushions and more.

Alongside everything unveiled about the park so far, Super Nintendo World is looking to be a unique and enjoyable theme park experience when it opens on 4 February.