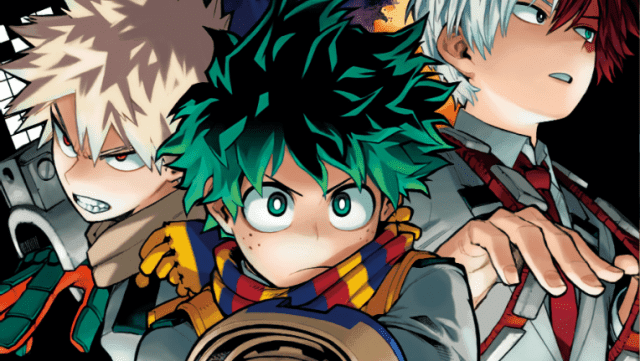 PLUS ULTRA! My Hero Academia takes the very American idea of comic book superheroes and applies shonen anime themes and Japanese cultural sensibilities to it.

Deku, the young hero protagonist, is a nobody who rises to become one of the best (a very shonen idea).  He owes everything to All Might, an older mentor who teaches and guides him. All Might is a very American-style superhero in an otherwise very Japanese story, with his bulging muscles, city or state-name punches, big hammy smile, and generally courageous “Symbol of Peace” attitude. In other shonen manga, he would be a comic relief character, such as the equally over-the-top Might Guy. Here, he is the greatest of all heroes.

All the main characters go to school, but it’s not an angsty, political X-Men situation. Instead, we get school festivals (they even got involved with a real-life festival), and other Japanese high school tropes.

Let’s take a closer look at My Hero Academia.

American Influences on My Hero Academia

American comic book superheroes have been surging in popularity. It makes sense that the time would be right for a comic book-inspired manga to come out.

(One-Punch Man’s Saitama, with his caped outfit, is another good example of an American-influenced manga character.)

It Starts with Quirks

My Hero Academia takes place in a world where almost everyone has superpowers. These superpowers are called “Quirks”. (here is YouTube video we made about the quirks we’d like to have).

The English word “Quirk” is a lot more interesting, and probably more accurate, than the literal translation of the Japanese term, which is “individuality.”  Americans already have plenty of individuality, but we don’t have superpowers.

In the first chapter of the manga, we learn that the first Quirk was discovered in China, and Quirks soon began showing up all over the world. Unlike some superhero comic books, the manga doesn’t go into detail about where quirks came from — nuclear radiation, outer space, gamma rays, mutation, etc.

It does state that roughly 80 percent of all human beings have some sort of Quirk.  That’s a huge departure from most American comics, where superpowers are rare and superheroes are even discriminated against.

Instead, it seems like the Japan of My Hero Academia has the opposite problem.  There are too many Quirks.  With that many people with superpowers, they can’t all be heroes.

Therefore, heroes have to be licensed.  To be a superhero, you have to go to school. And the best school, U.A. High School, has a tough entrance exam.

Unfortunately, at the beginning of the series, Izuku Midoriya (Deku) belongs to the 20 percent of the population born without a Quirk.

He is extremely analytical and good at taking notes on his favorite superheroes, which will turn out to be very useful later for planning battle strategies and defeating enemies. But that doesn’t seem to count as a superpower. He is also extremely enthusiastic about the world of superheroes.

Deku’s enthusiasm grabs the attention of All Might.  Despite having no superpowers, Deku runs into a fight with a supervillain who has captured his friend/rival, the explosive Katsuki Bakugo. Young Deku’s willingness to sacrifice himself impresses All Might.  He offers to train him and to make him his successor.

As it turns out, All Might needs to pass on his Quirk, One For All, to somebody.  Ever since an earlier fight with a supervillain, he’s been injured and unable to fight for very long before he deflates to a skinny, almost unrecognizable form.

Deku knows about this secret identity. But at first, nobody else does.

The Students of U.A.

With All Might’s help, Deku is able to get into U.A. High School, an elite hero academy.  Here he meets lots of other students training to become superheroes.

These characters are all awesome (some more so than others). Many of them deserve special mention:

Others include Fumikage Tokoyami, who has the head of a blackbird and a shadow monster which he can control; Toru Hagakure, the girl who is always invisible; Mina Ashido, the alien-looking pink girl who can shoot acid; Yuga Aoyama, the sparkly hero who can shoot a laser from his belly; and Minoru Mineta, the perverted boy who can produce sticky balls from his head.

The Story of My Hero Academia

Season 1 introduces us to the world of My Hero Academia.  Deku has to pass U.A.’s difficult Entrance Exam, which features a lot of robots to defeat. Almost immediately, the new students have to face a test by teacher Shota “Eraser Head” Aizawa, who can erase Quirks.

The students get their first superhero outfits. They then get split up into teams and have to battle each other. Deku and Ochaco are paired up as a team.

Season 1 ends with the U.S.J Arc.  It’s a school trip to the Unforeseen Simulation Joint — a reference to Universal Studios Japan. U.S.J. is a training facility; unfortunately, the League of Villains interferes.

Season 2 (2017) begins with the U.A. Sports Festival Arc. Pro heroes watch the festival to see who the best young heroes are. This is followed by the Field Training or Vs. Hero Killer Arc.

The Class 1-A students are offered internships with pro heroes. Deku trains with the retired hero Gran Torino. Gran Torino was All Might’s teacher. Kohei Horikoshi, the creator of My Hero Academia, has said that Gran Torino is based on Yoda.

While all of this is going on, the villains are also busy.  We learn about the artificial humans known as Nomu, which have multiple Quirks.  The Hero Killer: Stain is introduced. Stain meets up with the League of Villains. Gran Torino fights a Nomu.  Deku, Tenya, and Todoroki fight Stain.  We also learn more about the history of the Quirks, All For One and One For All.

Season 2 ends with the Final Exam Arc — students must fight U.A. teachers.  Deku and Bakugo team up against All Might.

Season 3 starts with the Forest Training Camp Arc. The training camp is led by the Wild, Wild Pussycats hero team.

The League of Villains is also active. Himiko Toga joins the league. She is cheerfully sadistic and twisted.  She can transform into people by using their blood.

At the end of the training camp, Bakugo is captured by the League of Villains. This leads into the Hideout Raid Arc. A group of pro heroes plan an attack on the league’s hideout.

The next arc is the Provisional Hero License Exam Arc. The members of Class 1-A enter their new dormitory.   The students study special moves for the provisional hero license exam. During the license exam, the U.A. students are up against opponents from rival schools.  The other schools all target U.A.  The exam features a simulated rescue operation and a villain attack.  In the end, almost everyone in Class 1-A passes – except Bakugo and Todoroki.

There is some more stuff with the League of Villains, and All Might talks with All For One in prison.

This is followed by the Shie Hassaikai Arc.  This arc starts to get set up at the end of Season 3. It really gets started in the fourth season.

There is a work-study program for young heroes. We meet Mirio Togata, the goofy and energetic third-year student. He can pass through solid matter.

We also meet a new villain, Overhaul.  He has a deadly Quirk, which can take things (or people) apart and rebuild them.  He can modify his surroundings.

In the work-study program, Deku and Mirio work under Sir Nighteye. Sir Nighteye is All Night’s former sidekick, and he can see into the future. He foresees All Might’s death.

The two student heroes meet a little girl, Eri. They suspect that something is wrong, but they fail to do anything about it.  Later, Miro and Deku realize that they have made a mistake, and vow to rescue Eri from Overhaul. Mirio protects Eri, but loses his Quirk. There are some epic battles, and Sir Nighteye dies.

There is a short arc involving Bakugo and Todoroki taking remedial courses to finally earn their hero licenses.

This is followed by the U.A. School Festival Arc.  Gentle Criminal and La Brava want to crash the school festival.  Deku knows that if they get anywhere near the festival, the festival will be closed down — and Eri will be unhappy.  He stops them.

There is also a fun story about preparing for the festival.  Everybody at Class 1-A has a role, from dancing to behind-the-scenes lighting and special effects.  Kyoka Jiro takes care of the music.

The Future of My Hero Academia

This was followed by the anime TV series, which started in 2016. Season 4 ended on April 4, 2020. At the same time, it was announced that there will be a My Hero Academia season 5. However, the producers had not announced a release date for the fifth season at the time that this was written.

My Hero Academia: Battle for All is a Nintendo 3DS game. It came out in 2016.   Another game, My Hero One’s Justice, came out in 2018.  This game is available in PlayStation 4, Nintendo Switch, Xbox One and Windows.

My Hero Academia is available at Crunchyroll.