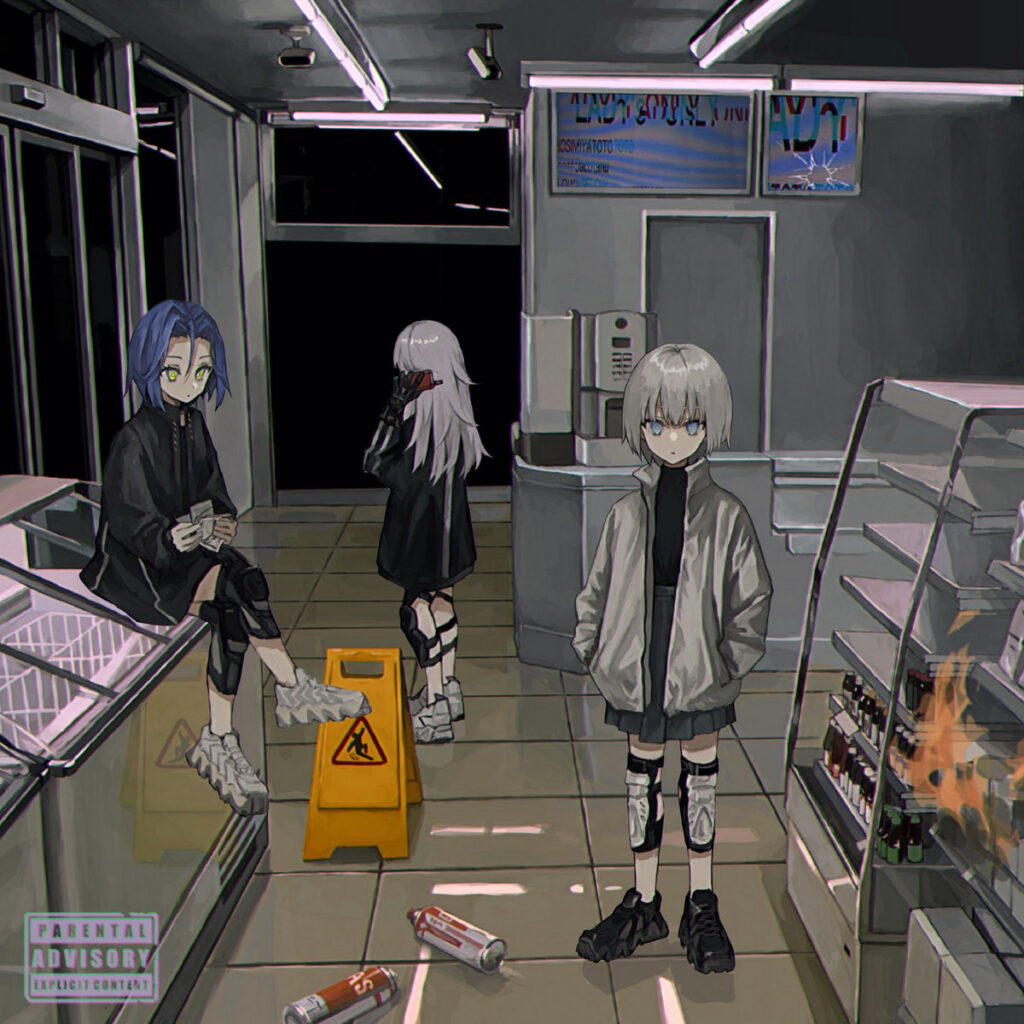 Bandcamp’s decision to waive their revenue shares on the first Friday of every month (meaning creators get all the sales from their offerings on the platform over a day-long period) started one year ago, when COVID-19 went from an outbreak to a pandemic and disrupted every level of society, including the music industry. This campaign has helped artists during the ongoing global crisis, which carries on more than a year later. So far, millions upon millions of dollars have been delivered to creators because of these days, and has received ample praise from the media and consumers.

April 2021 has arrived, and OTAQUEST continues to highlight recent Bandcamp releases from Japan over the last month worth supporting. Honestly, I am not even sure how to do these intros anymore! The pandemic has now been part of our lives for more than a year (we’ve burned past the anniversary pieces looking at the start of it and moved on to just trudging forward) and while vaccinations are starting to pick up in parts of the world, plenty of other areas are still months away from getting it going. There’s definitely hope, but it still seems really far off, at least at this very moment.

Maybe, though, that’s just a slightly jaded Japan view on it. Cases remain low when compared to other nations, but the vaccine rollout is also moving a bit slower than elsewhere too. It’s a weird feeling of being in a better position than other places, but feeling like it will take longer to really push past this.

One area where optimism actually seems on the rise? The music industry, as more live shows happen in major cities (albeit with reduced capacity and all kinds of infection-prevention methods in place) and summer music festivals appear to be on the block, with the Fuji Rock Festival announcing plans to go through with this year’s edition, albeit with only domestic performers. That said, total normalcy remains a long way off, so throwing a few extra bucks towards artists using Bandcamp is a good way to keep them afloat during tough times. Which is one of the reasons this feature carries on… the other being to help introduce great Japanese music available on the platform to folks all over the world.

LADY’S ONLY — Keep It Real

Electronic party starters LADY’S ONLY team up with Hoshimiya Toto for a pair of buzzy, pit-generating bangers featuring some sweet vocal melodies on top. While there’s definitely a world where one could appreciate these two songs (plus a pair of on-point remixes) in a live setting, the energy LADY’S ONLY gets across coupled with their attention to little details makes this one a standout at home, too. Get it here.

Producer Fellsius can already count one of the young year’s best songs, ‘Night,’ and now they’ve gone and added a stellar EP on top of it. Journey flexes their whole spectrum of dancefloor-aiming skills, from more hyperactive tracks to more spacious rumblers that make the most out of… not very much. Get it here.

Pioneering Japanese dubstep (the U.K. version, not the biggie-sized fest version) producer GOTH-TRAD originally released PSIONICS in 2016 as a ‘very limited’ CD, meaning that most people have never even come close to experiencing it. That’s no longer the case, as he’s uploaded it to Bandcamp, allowing anyone to dive into this mix of limb-moving creations and more ominous atmospheric pieces. Get it here.

Pure, delirious hardcore dance action with some 8-bit magic weaved in for good measure. Producer inaharu provides a jolt to anyone feeling a bit lethargic this month, with this burst of non stop caffeine. Get it here.

Osaka duo STILL DREAMS channel golden-era new wave with a dash of ennui on this two-song release. A good reminder that sad people can let loose, too. Get it here.

Slightly off-kilter electronic music from Nagoya, from a creator boasting one of the most prolific discographies of work over the last ten years. This set of songs isn’t quite as claustrophobic as what they’ve done in the past, instead opting for a charming unease. Get it here.

The list up to this point feel a little too… active for your liking? Never fear, because we have some slow-burning ambient to help you chill, courtesy of creator Takuro Okada. Ideal for sitting in a sparse room, drifting off. Get it here.

Japanese producer Negative Headphone blends chugging rock theatrics with hard-hitting electronic programming, and this set is their definitive work, capturing the sound and spirit they’ve been chipping away at for about a decade now in one go. Get it here.

Fukuoka staples shigge and DJ AtoNN comes together as hndsms, working together to create melodic techno tracks that go right up to the edge of collapse, but always hold it together. A welcome rush of adrenaline that will make you crave an open club. Get it here.

The duo of South Korea’s Mellow Blush and Japan’s Meow come together to form a new group crafting psychedelic folk music featuring diversions into rap (at least on the bossa-nova-tinged title track). Ideal for letting yourself zone out in the middle of nature during the warmer spring days. Get it here.

Buckle in for some wild rock courtesy of Japan’s M.A.Z.E., with this set of songs bouncing all over the place and shooting off in unpredictable directions. Get it here.

This one doesn’t 100-percent match the theme of this article, but it does feature Japanese artists, and revolves around the melodies found at Japanese train stations. Chiptune artists offer up their interpretation of station jingles from across the country, adding their own flair to each. A fun experiment with delightful results. Get it here.