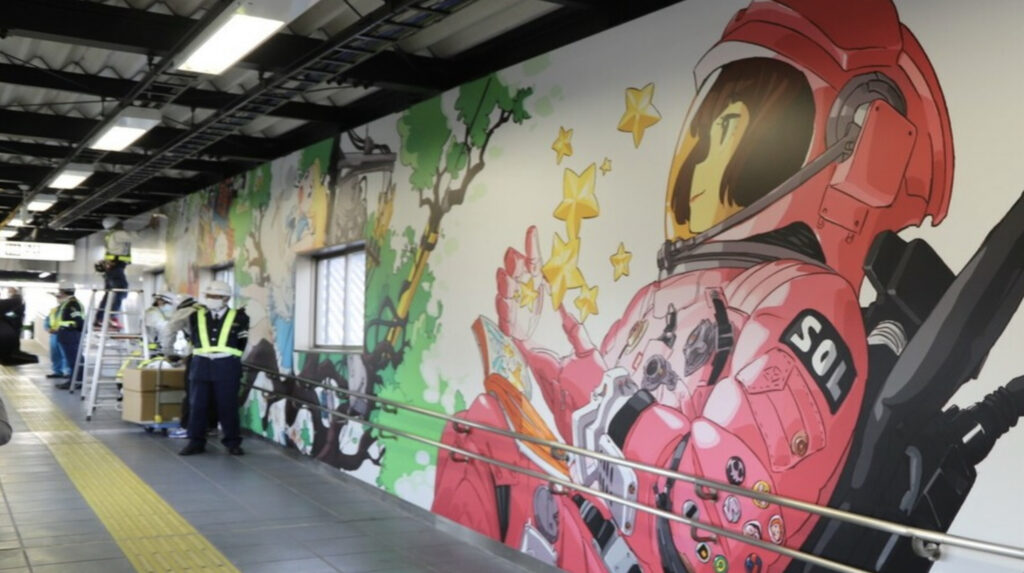 Sushi may be most well-known for his work with Studio TRIGGER on the likes of Kill la Kill, but his artistic portfolio expands beyond this. One look at the animator’s twitter account will reveal they’re an avid idol fan and a particular fan of WACK groups such as BiSH. They’ve also released art books featuring their idol work and more, all featuring their distinct style. In perhaps their largest artistic showcase yet, a massive 28m mural of Sushio’s art has been erected inside Higashi Tokorozawa Station.

The title of the mural is Hoshi ni Nagai wo (Wish Upon a Star), and was put up to celebrate a remodeling of the station in Tokorozawa, Saitama Prefecture. The art features a female astronaut in a pink space suit cradling stars that have been released from the book on their lap, overlooking a fantasy world featuring, among other things, a blonde girl in an Alice in Wonderland-style dress. The concept behind the mural is to capture ‘people who collect stars while coexisting with nature’.

Part of the reason for the mural being put up is to celebrate the remodeling of the station to fit with its main tourist attraction, the nearby Kadokawa-managed Tokorozawa Sakura Town, one of the largest pop culture centers in Japan.  The attraction just opened a few months ago as a manga- and anime-focused shopping mall, hotel, museum and event space designed to manufacture a large collective environment for anime and manga fans outside of Tokyo.

One of the exits for Higashi Tokorozawa Station leads into the new venue, and since many will visit for the purpose of coming here, this Sushio mural will help to get visitors in the mood for visiting the new attraction.

It’s also a very impressive mural in its own right, and one well worth checking out if you ever end up in the Tokorozawa area any time in the future.

SUSHIO is Releasing a New Artbook Of BiSH, Gang Parade, and Other Alt-Art

Sushio & And A Collaborate For “SiCK & POSiTiVE GiRLS” Apparel Collection

TRIGGER’s Own Sushio Releases His Take on Wonder Woman