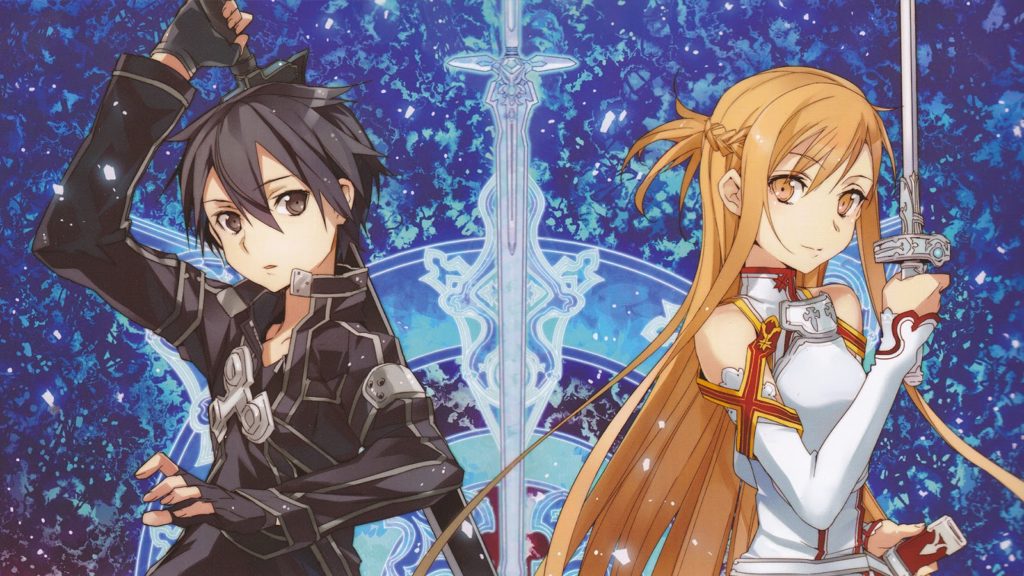 No matter which way you slice it with your Elucidator, Reki Kawahara’s light novel series Sword Art Online has gone on to become a breakaway success.

Publishing company Kadokawa has revealed through an official press release that the Sword Art Online light novel series, which has spawned many successful anime, video game and manga works, will soon reach an impressive milestone of 20 million copies printed worldwide. The planned April 25 reprint in Japan will push the series over the threshold. Furthermore, that same reprint will grant the first book in the series, Sword Art Online 1: Aincrad, the distinct honor of being the first single-volume to ever cross 10 million copies sold under the company’s Dengeki Bunko novel label. In commemoration of this fact, the reprinted volumes will come wrapped in a new promotional band. Check it out below! Kadokawa were also eager to share that Sword Art Online’s success is due in no small part to overseas sales as well. Japanese sales of the series clock in at 13 million, while 7 million books have been sold in China, Taiwan, Korea, Thailand, North America, United Kingdom, Vietnam, Spain, Italy, France, Poland, Russia, and many other countries.

The good news for the franchise doesn’t end there however.

Japanese anime and manga news site Mantan Web reports that the franchise’s first big movie release, Sword Art Online: Ordinal Scale, has earned 2.3 billion yen from 1.6 million tickets sold in Japan in just seven weeks. Moviegoers who opt to see the movie from the eighth week (April 8~) onwards will receive what is being coined as a “spoiler” book, containing character and setting art, staff interviews, and more. You can sneak a peek at the contents of the book below. Don’t worry – this promotional Tweet doesn’t reveal anything too drastic.

You can check out a trailer for Sword Art Online: Ordinal Scale below. The movie has seen a limited worldwide release in countries like North America, Mexico, South Korea and Taiwan. It will return on a large-scale basis to the U.S. starting from April 22, courtesy of Aniplex of America.

Sword Art Online tends to be a contentious series among anime fans. Its wild popularity is easy to comprehend – it’s a fantasy romp brimming with action, attractive characters and enviable situations. If you add that little dash of video game spice, you suddenly find yourself with a recipe for success that has the potential to appeal even to the most casual or non-anime fan. No matter which side of the critical fence you sit on, it’s still very hard to deny just how much of an industry success story this franchise has become.

Are you someone who has yet to take that first step into the Sword Art Online universe? This synopsis of the first volume of the light novel from American publisher Yen Press just might entice you.

In the year 2022, gamers rejoice as Sword Art Online – a VRMMORPG (Virtual Reality Massively Multiplayer Online Role Playing Game) like no other – debuts, allowing players to take full advantage of the ultimate in gaming technology: NerveGear, a system that allows users to completely immerse themselves in a wholly realistic gaming experience. But when the game goes live, the elation of the players quickly turns to horror as they discover that, for all its amazing features, SAO is missing one of the most basic functions of any MMORPG – a log-out button. Now trapped in the virtual world of Aincrad, their bodies held captive by NerveGear in the real world, users are issued a chilling ultimatum: conquer all one hundred floors of Aincrad to regain your freedom. But in the warped world of SAO, “game over” means certain death – both virtual and real…

I’m probably going to have to go buy my ticket to Ordinal Scale now.