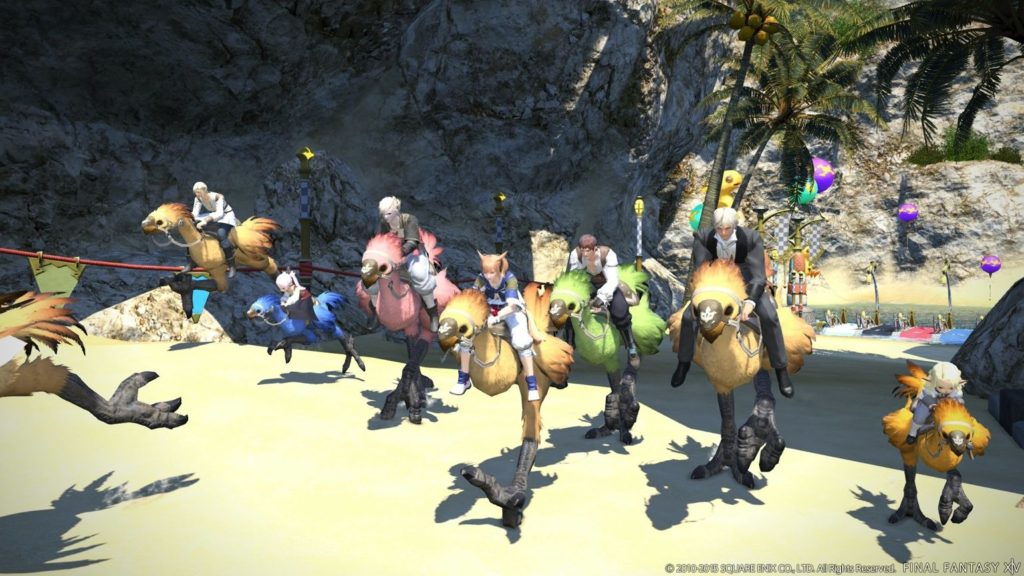 Online spaces, including MMORPGs, are a space for many LGBTQI+ people to explore their identities and discover communities where they can find love and support. Sydney Gaymers, a large Australian LGBT gaming group first marched in the Sydney Gay and Lesbian Mardi Gras parade in 2013 thanks to support from companies like Valve, NCSoft, and Sony Online Entertainment. The group marched in the parade as a way of reaching out to those in the LGBTQI+ community who may feel they may want to join a supportive gaming group.

The group has grown over the years and participated in the parade each time. However, this year they are working directly with the Final Fantasy XIV team to create a float for the 2019 Mardi Gras parade. According to a press release from Square Enix, this is the first video game to sponsor a float in the parade.

“This collaboration could never have been realized without the efforts of our community. When FFXIV took part in PAX Australia, it was the FFXIV players in Australia who offered us the greatest welcome and utmost support. This led on to our community and Sydney Gaymers working together to make the collaboration a reality.”

“To see it makes me very happy indeed, both as the person in charge of FFXIV and also as just another player of the game. FFXIV is another world that continues to grow and expand online. In that world people become adventurers, known as the Warriors of Light, and can continue to be free. I would like to continue developing this world, hand in hand with communities across the globe.”

Final Fantasy XIV introduced same-sex marriage within the game back in 2014 after discussing with the team and asking, “Within Eorzea, why should there be restrictions on who pledges their love or friendship to each other?” Over the years, the game has also included LGBT non-playable characters such as a quest giver who refers to himself and his “steadfast companion” as a couple.

“Sydney Gaymers is thrilled to be collaborating with FINAL FANTASY XIV Online for its 2019 float entry, titled Realms United. It means so much to receive direct support, validation, and acknowledgment from such a force in the industry. Not only that, to be supported by a game where so much of our community and values are represented.”

“The FINAL FANTASY XIV Online community does not discriminate and respects everyone’s freedom and their individual values equally. For many LGBTQI+ people, online communities provide a space for the journey and exploration of personal identities. They allow us to connect, and celebrate, and they reinforce that we are not alone. Sydney Gaymers could not have a better sponsor to help create the most ambitious float it has ever undertaken.”

The two groups are yet to comment on the details of the Realms United float and what it will all look like, but say that more information will be released soon. It’s definitely an exciting time, not just for the Australian Final Fantasy XIV community, but for Final Fantasy XIV fans in general to receive this kind of recognition and support for LGBTQI+ players.