Tabitabi Demonstration: The Boys Are Back in Town 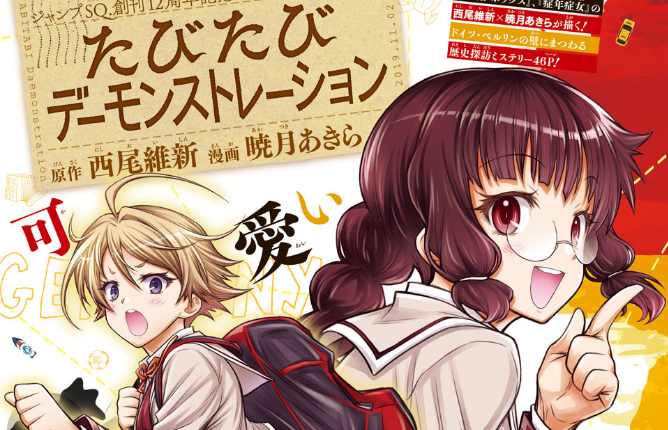 I don’t know if you’ve heard, but the boys are back in town. The esteemed duo behind Medaka Box, Nisio Isin and Akira Akatsuki, launched their new one-shot Tabitabi Demonstration in December’s issue of Jump SQ, Shueisha’s monthly seinen magazine, after a long time spent apart following the conclusion of Shounen Shoujo. But does this one-shot prove that the duo has still got it? Could this be the start of a renewed phase in their partnership? Let’s find out.

Before we get started on those questions, however, it would perhaps be useful to give a brief rundown of the actual content of this new one-shot, given that Jump SQ manga aren’t as readily available in English as, say, Weekly Shonen Jump manga. One-shots aren’t often translated into English, either – unless you’re Yusei Matsui, that is.

Tabitabi Demonstration follows a pair of female high-school students named Shiori and Ryoko, who have been friends since childhood. During class one day, they’re learning about the Berlin Wall when Ryoko, the more animated of the pair, comes up with the great idea of traveling to Berlin to buy souvenir fragments of the Berlin Wall so that they can reconstruct it in Japan, then smash it up and sell the fragments once more as souvenirs. 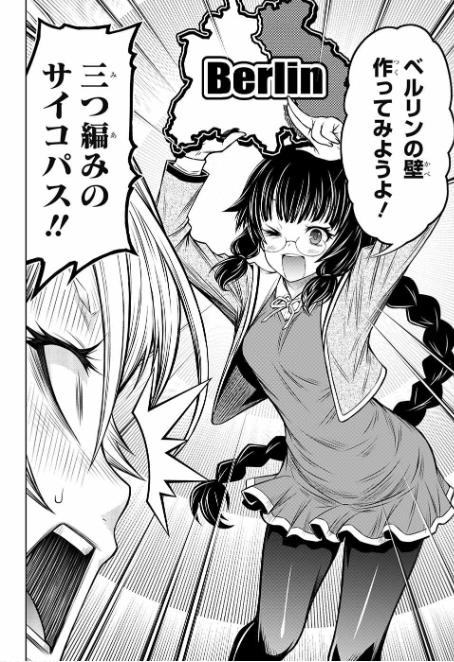 Now, reading Nisio Isin in Japanese is difficult at the best of times, so there may be some gaps in my understanding here and there. But, as far as I can tell, that is the kind of mad plot that forms the basis of Tabitabi Demonstration – and things only get weirder from here on out.

Once the duo arrives in Berlin to begin work on their project, they’re quickly accosted by a group of young German students who are trying to reassemble a section of the destroyed Berlin Wall so that they can solve a long-standing urban legend: a mural on the wall’s east side. 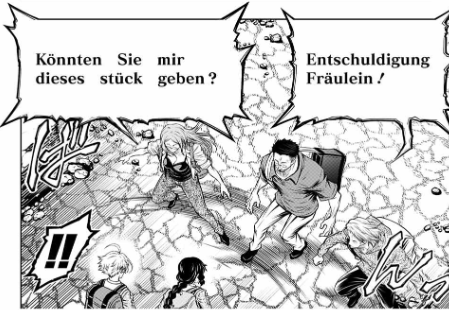 As they explain, the side of the Berlin Wall that lay in West Germany was covered in drawings and graffiti since it was left relatively unguarded, whereas the section that lay in East Germany was supposed to be pristine given that it was heavily guarded by snipers and patrols.

Nevertheless, there’s always been whisperings of a rare mural on the east side, and these students are determined to get to the bottom of the mystery. Shiori and Ryoko agree to help, handing over the fragments of the wall that they bought as souvenirs that will form the final portion of the reconstructed wall, offering their help in turn. 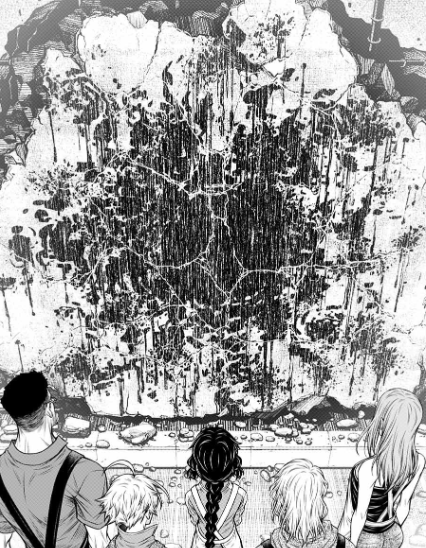 They quickly find that the urban legend was true, as the reconstructed wall reveals a scattershot mural ‘action drawing.’ Photos are promptly uploaded online, but the general public refuses to believe that the mural is real – they raise the genuinely plausible objection that this drawing could have been done during the chaos that ensued after the Berlin Wall was torn down in 1989.

It is in the face of this skepticism and ‘revisionism’ that the core conceit of Tabitabi Demonstration is finally revealed. Ryoko is determined to prove that the mural is real, that it was created before the Wall came down and sets about doing so with a ‘demonstration’ – essentially trying to put together the pieces (pun intended) of the mystery and come to some kind of conclusion. 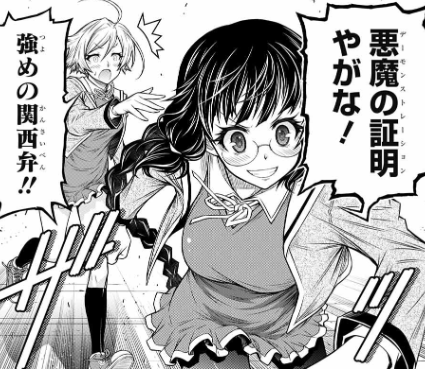 Tabitabi Demonstration thereby reveals itself to be a mystery story, the solution to which comes about when Ryoko smashes the reconstructed wall to pieces once more and discovers that one of the fragments has a paintball lodged inside. It is from this that Ryoko infers that a soldier stationed on the east side shot this capsule at the wall and thus created the mural. 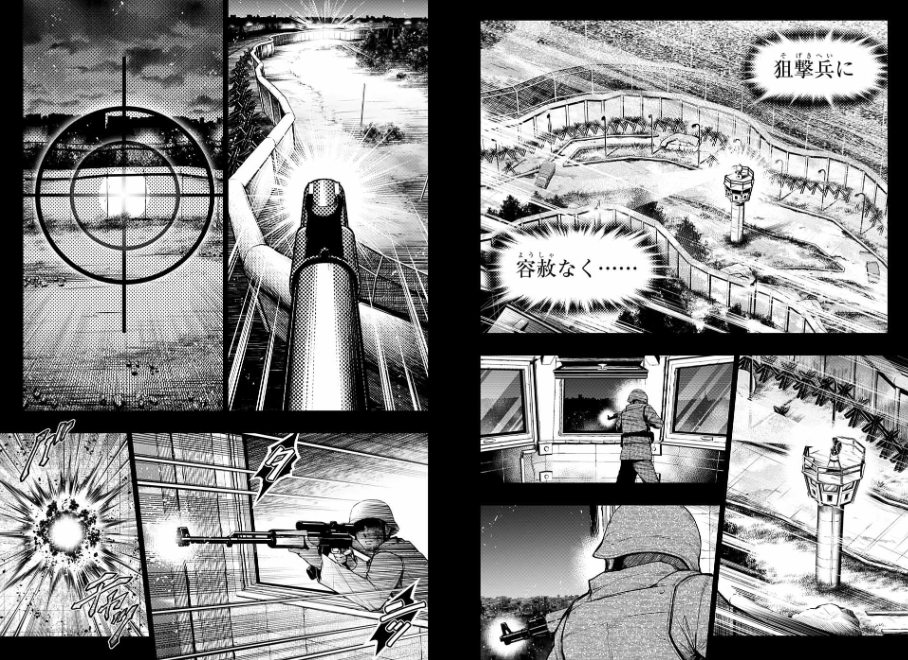 As to why the soldier would do this? Well, the one-shot rounds off with a surprisingly thoughtful coda, as Ryoko explains that there will always be ‘imprudent’ people like them no matter the epoch, no matter the circumstances.

The pair then return home to Japan, where Shiori reflects on their adventure – only to have Ryoko burst in and declare that they should go and swim in Venice; thus beginning the cycle of Tabitabi Demonstration anew.

As you might be able to tell from that rather long and detailed synopsis for a one-shot, Tabitabi Demonstration isn’t exactly the most straightforward story. It bounces from idea to idea, from location to location in a dizzying flurry that doesn’t make much sense on reflection. In this sense, Nisio Isin is really letting down his side of the bargain.

This is because Akira Akatsuki’s art and general visual presentation are as good as ever. Each character has a unique design, the panels make the complicated content slightly easier to digest, and the artist even gets to show off his more realistic side in his renditions of such iconic locations in Berlin as the Brandenburg Gate and the East Side Gallery. 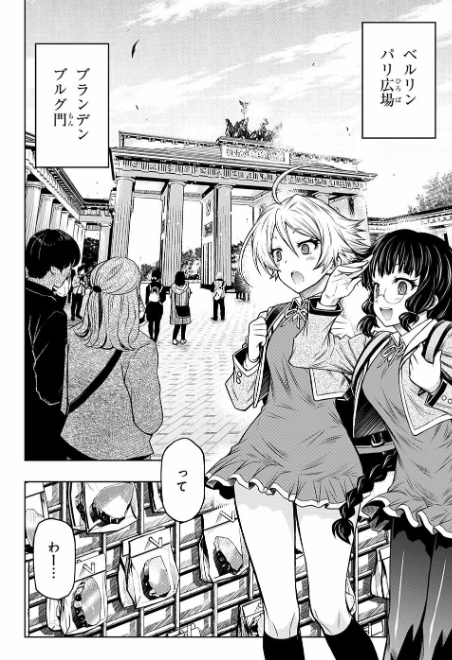 A lack of focus is what lets down Isin’s story in comparison with Akatsuki’s art. In this sense, it’s unfortunate to see that the same process is happening with Tabitabi Demonstration as it did with Akatsuki’s previous serialization, BOXER’s BLAST.

But there is, I suppose, a certain charm to a slightly unhinged adventure that had me, an avid fan of the duo, still engaged with the story despite its flaws. There’s also the fact that these characters are classic Isin through and through with their zany, one-note personalities.

Still, there are some ways in which Isin steps outside of his comfort zone. For one, there’s nothing supernatural afoot here – it’s just a simple mystery stemming from real-life history, something which I’ve never seen from the prolific author before. Seeing characters speak languages other than Japanese was also a little bit of a shock, although this quickly changes back. 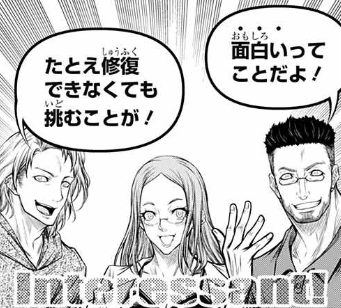 Overall, it’s quite clear that Tabitabi Demonstration is far from the duo’s best work. It pales in comparison with their previous collaboration, Shounen Shoujo, especially as it seems to actively ignore the type of focused mystery storytelling that made that particular series so compelling.

Return of the Boys?

But seeing Nisio Isin and Akira Akatsuki working together once more, even on this flawed one-shot, is nevertheless quite exciting. It’s no secret that I’m a huge fan of Medaka Box, and I’ve been waiting for the duo to produce another masterpiece on that level for a while now. I’m sure that they can do it – if not with this series, then perhaps with another.

There’s no reason, in turn, to think that this might not be in the works already. Both creators’ schedules seem free – Akira Akatsuki finished up with BOXER’s BLAST a couple of months back, and Isin has been scrambling for a serialization since 2017. All they really need is a good idea to come back with.

If they really are wedded to the idea of a zany, globe-trotting mystery adventure and thus intend to turn Tabitabi Demonstration into a series no matter what, then there are several tangible points of improvement for the duo. Firstly, there needs to be more focus in the story – introduce the ‘mystery’ straight away and have our characters be focused on that, not tourism. Secondly, give Shiori a little more to do – at the moment she’s just a sounding bound for Ryoko’s eccentricity. Thirdly, you could probably stand to lose a bit of the zany comedy. Just a little bit. 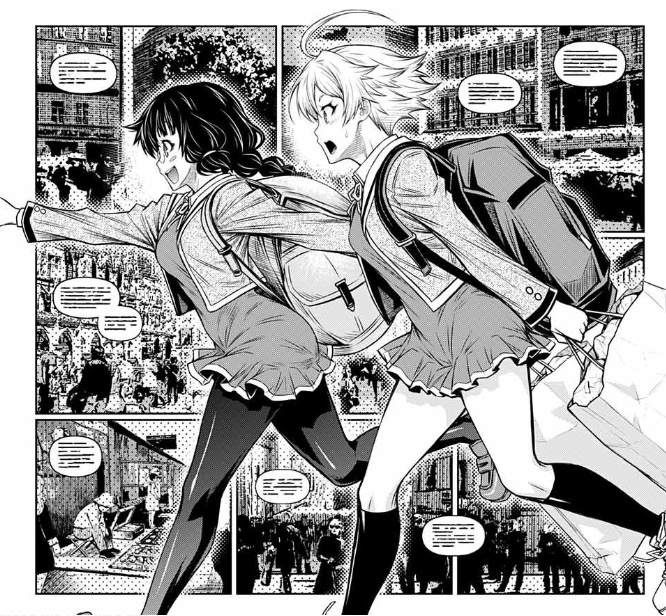 Jump SQ would surely be happy to take them on, no matter the idea. Nisio Isin’s name commands a fair amount of attention, and he’s already produced a successful series with Akira Akatsuki in the magazine from 2015 to 2017 in the form of Shounen Shoujo. What’s curious, however, is the fact that Tabitabi Demonstration ran as a one-shot – are they no longer confident enough in the power of Nisio Isin to give him a series outright?

Nevertheless, if Tabitabi Demonstration does become a proper series in Jump SQ, then it could end up scratching the globe-trotting mystery-adventure itch that has been rearing up ever since Noah’s Notes got canceled. And with a duo such as Nisio Isin and Akira Akatsuki behind it? The sky’s the limit. The boys are well and truly back in town.

You can read Tabitabi Demonstration in this month’s December issue of Jump SQ.