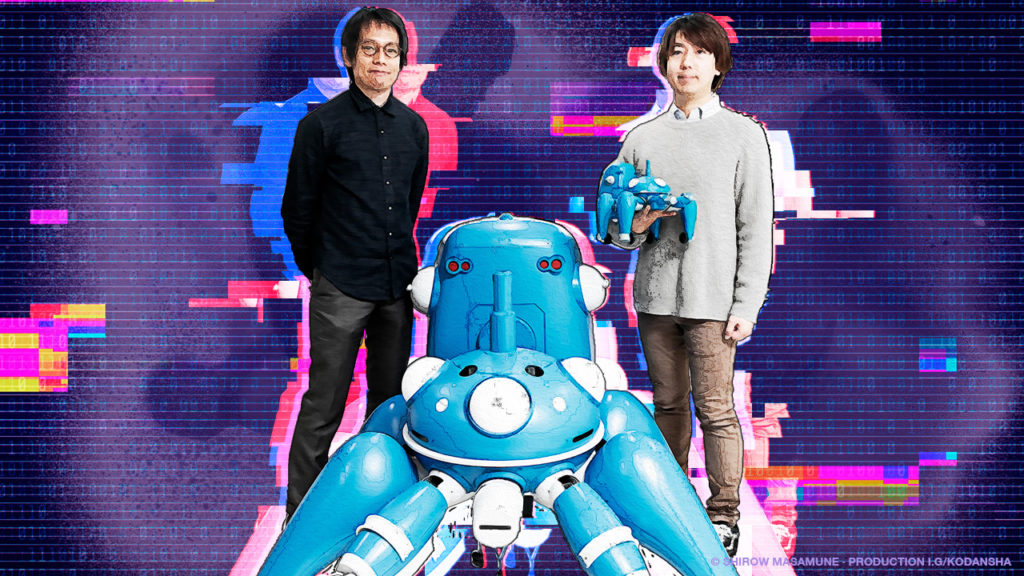 An Interview With the Researcher & Engineer Who Created a Real Tachikoma: Updating the World by Communicating With Robots

OTAQUEST: First of all, Mr. Matsumura, you obtained the license, made the 1/2 scale of Tachikoma, and developed the companion app. Can you explain how you applied the production of “Ghost in the Shell” and the character, Tachikoma, into your research?

Reo Matsumura: In “Ghost in the Shell”, it mainly draws a good picture of a society where people’s cyborgization is progressing through “義体(Gitai)”. On the other hand, Tachikoma is portrayed as a machine becoming closer to human. It was the very interesting part for me and gives us good suggestions on how should we design the Human-Machine Interface as technology advances.

In my research, I had been thinking that it is also important to design a machine as “someone” who humans want to communicate with. For example, we often feel awkward when we don’t have good chemistry between
store clerk (laughs). However, what if the clerk was their favorite celebrity and recommended them to buy some clothes? At least the desire to refuse that customer service would be much less. In addition to considering “what” and “how” we improve communication, I think it’s important to consider “who” we want to communicate with.

While warming up the hypothesis of this research, I got the chance to try a field trial at the I.G store. When I was thinking about a store that makes customers have more fun while shopping in or makes customers want to go shop, I thought that if one of the store clerks was Tachikoma and gave a customer service, I might be able to make “someone” that fans want to communicate with. In the experiment, we implemented a service to receive a pre-ordered product from the 1/2 scale Tachikoma. Of course, it was hard to make Tachikoma work autonomously in the store, so it worked partially independently and the other clerks helped with decision making partially.

So, the 1/2 scale of Tachikoma you could also say is “義体(Gitai)” for a store clerk. They augmented their embodiment by borrowing the 1/2 scale Tachikoma body, and by so, they were recognized to the customer as Tachikoma. 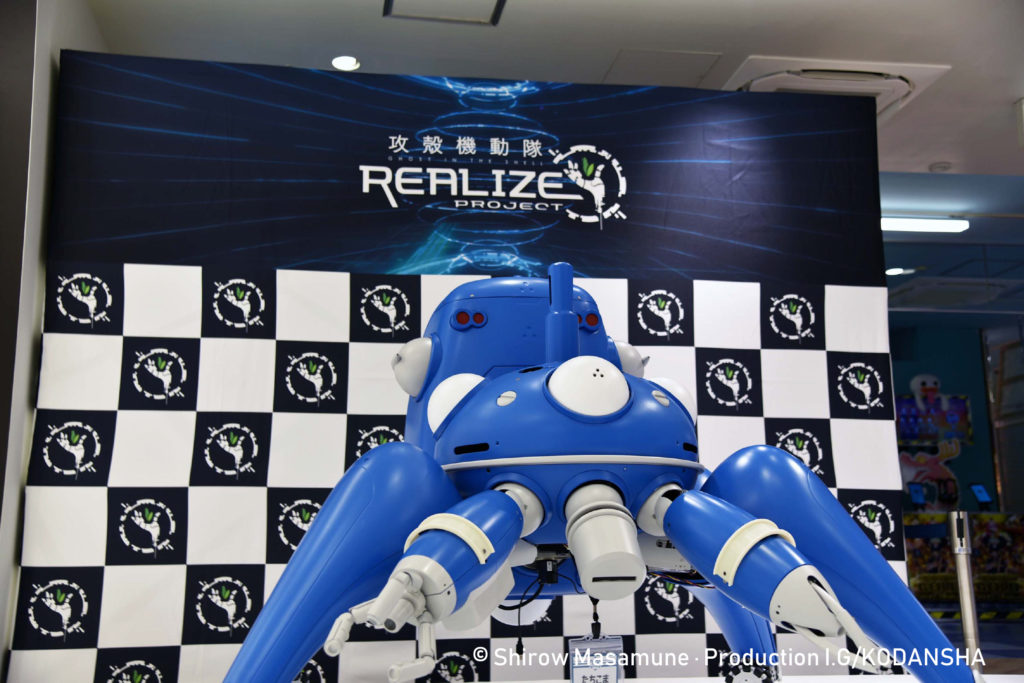 OTAQUEST: What did you learn from the experience?

Reo Matsumura: When considering “customers first”, there is a limit to satisfying communication if you are not someone a customer wants to communicate with. In other words, your embodiment itself could be a disadvantage in customer service. To speak in extremes, it won’t work because it’s you (laughs). This is why I thought that cyborgization of store clerk as the Tachikoma is one of the solutions when considering customer service to attract customers. Actually, the 1/2 scale Tachikoma helped the store’s sales go up, so I’m more confident that it could be possible to build more comfortable communication with others by being what they want. 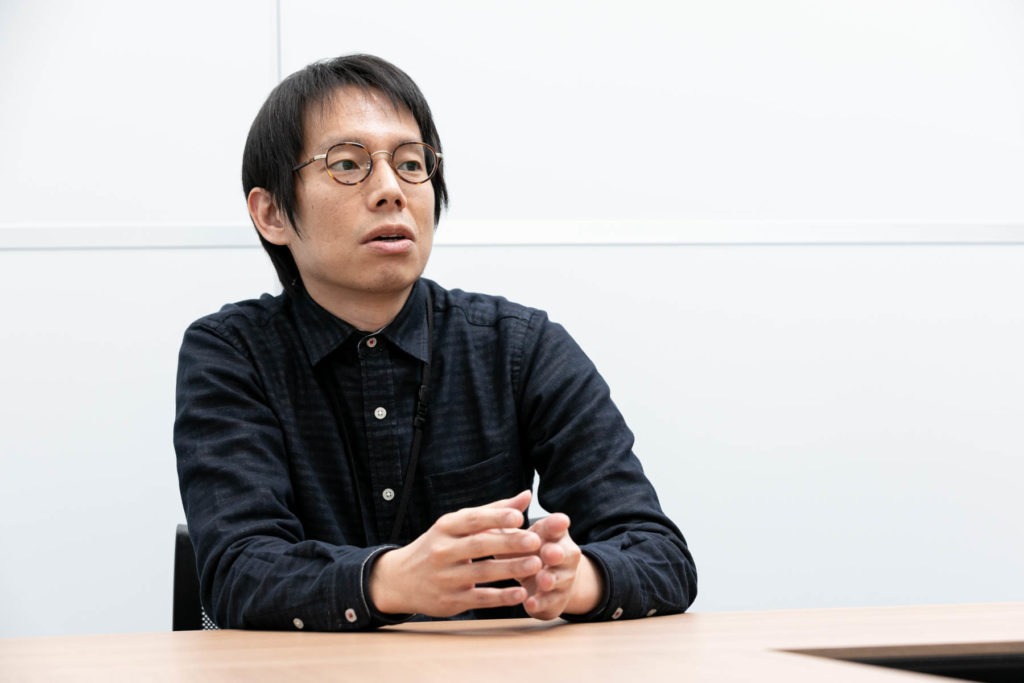 The most interesting thing in the experiment was the service of receiving products from Tachikoma at the store. The receiving service was linked with the smartphone app. When a customer visited the store, Tachikoma handed over the product based on the data in the app. At that time, we set up a system where after finishing with one customer, we shut the power off and restarted for the next customer. Because of doing this, customers started to recognize the Tachikoma as “my Tachikoma” which they raised in the app. In the anime, Batou picked a specific Tachikoma even though there were other Tachikoma with the same design lined up. It’s like the same thing happening in real life. I thought that even if the clerk was exactly the same 1/2 scale Tachikoma, the clerk would become “someone/Tachikoma” who was important to each customer if Tachikoma’s embodiment could inherit the context which customers had individually.

OTAQUEST: Why did such thing happen?

Reo Matsumura: The customers already knew the story of “Ghost in the Shell” and already had feelings about the character of Tachikoma, so they had a “context” created from the story. They already had a specific mindset about Tachikoma. So, by using Tachikoma’s shape, behavior, and script, we can replay the “context” and create smooth communication.

OTAQUEST: So, it stimulated the customer’s perception of the story with the context of “Ghost in the Shell”.

Reo Matsumura: Even if it isn’t Tachikoma, for example, let’s say a vacuum cleaner robot gets stuck and is beeping in a house and you helped the robot. Then, if the robot you helped accidentally comes towards you, there could be a story surrounding that and it gives you a feeling of admiration. Of course, the cleaning robot doesn’t feel or think anything and isn’t programmed for such behavior, but the user might buy the same model after the robot breaks because of it.

In the environment where robots and humans interact with each other, the functional design for creating context is important, and using some contents of movies or anime would be very useful for that because a story is already there and plenty of context has already been created. If you can present the context of “Tachikoma” to people who have seen “Ghost in the Shell”, and who have an attraction to the Tachikoma character, you can give them a good image of the situation of having a “robot clerk”, and also you can reduce the discomfort of experiencing new technologies.

I want to utilize robotics to support society. Actually, I feel that the technology of robotics was useful as a marketing tool to increase sales at the I.G store. I like robots as fiction, of course, but as a researcher, I want to think about ways to update the world with robots.

OTAQUEST: Mr. Maruyama created a smart-toy, the real-size DOMINATOR from “PSYCHO-PASS” and was involved in the development of the 1/8 scale Tachikoma for the general household. How much did you know about the 1/2 scale Tachikoma?

Tsubasa Maruyama: I heard from Production I.G that such a product was developed and saw the release, but I had never touched it. The only thing was when I was doing the endurance test to make Tachikoma move all night, I was struggling with what to do because the battery ran out. Then I realized that the 1/2 Tachikoma had a cable coming to it from above.

Reo Matsumura: It was hung by a tether cable.

Tsubasa Maruyama: I remembered that and incorporated the idea to make the 1/8 version work by hanging the power cable from above. 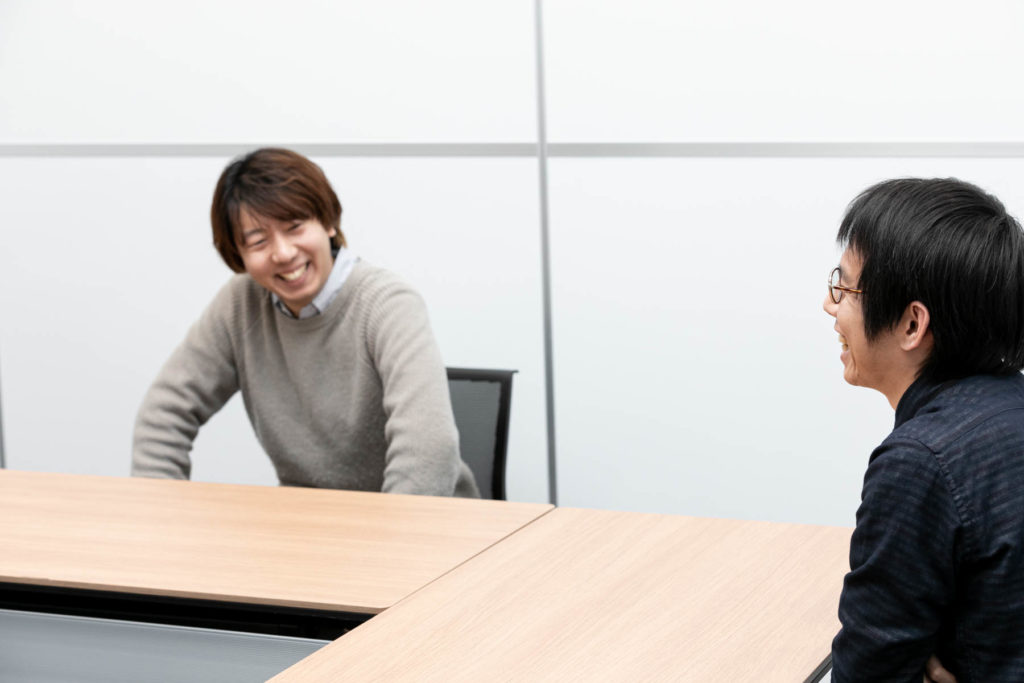 OTAQUEST: Mr. Maruyama, can you tell me about the difficulties in making the 1/8 scale Tachikoma?

Tsubasa Maruyama: Tachikoma in the original manga and anime moves beyond the laws of physics, and we cannot make it happen with the current technology we have today. So, I set a goal to make it run and walk on wheels and have a conversation by using AI. The problem was that I wanted to make it move more energetically, but if I raised the center of balance, it lost stability and put more stress on the foot joints. If I lowered the center of balance, it became more stable, however, the motion performance dropped significantly and used small steps to move. What I eventually did was that I put the batteries on each of the 4 legs on the 1/8 scale Tachikoma in order to lower the center of balance as much as possible. When the legs have more weight, the center of balance can move more freely when stepping forward. Also, if it tries to move with the same exact proportion in the anime, the back end is too heavy so it tips over, so I made the rear pod smaller and empty.

Reo Matsumura: I have experience from making the 1/10 scale of Tachikoma about 10 years ago for the promotion of “Ghost in the Shell: Stand Alone Complex – Solid State Society”. Because of that experience, I was able to get the license for the 1/2 scale project. Since I’ve experienced it myself, it made me feel like “You went through hell” after hearing your story (laughs). Back then, I put lead in its arms to be able to walk because the rear pod was also too heavy, but the motors on the joints faced a lot of physical stress. So, it got hot quickly when walking, and 30 minutes was the maximum amount of time we could operate it.

Tsubasa Maruyama: I was jealous that the 1/2 scale Tachikoma had tires that could move in any direction. 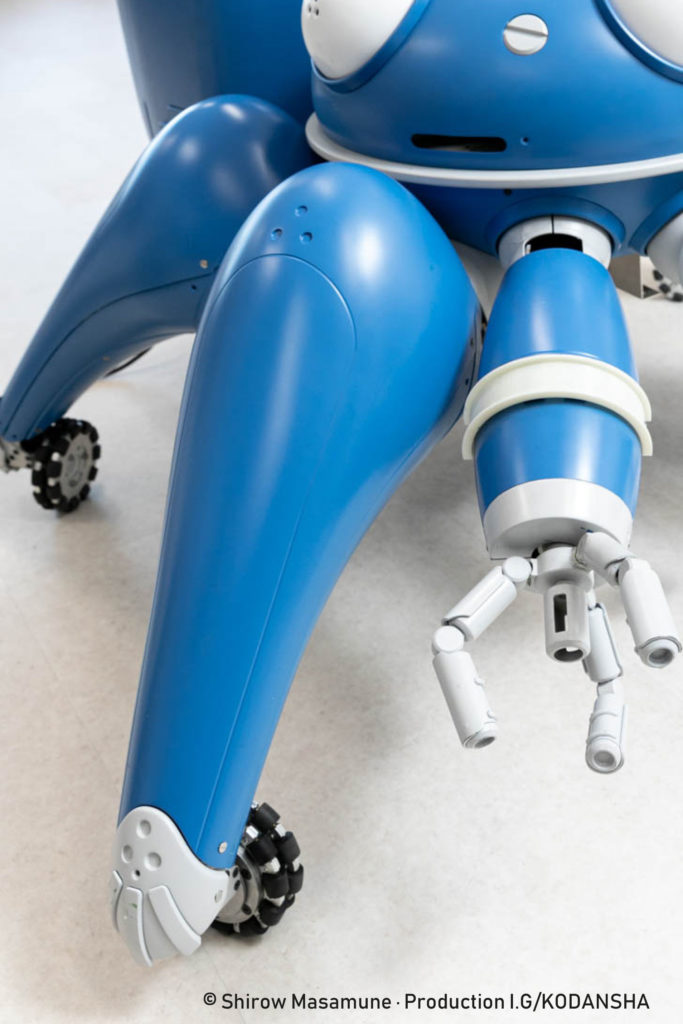 When the 1/8 of scale Tachikoma turns, the motors on the leg joints have to resist in order to support the posture, so a lot of pressure goes to the joints, but if we mass-produce with the wheels, the cost adds up pretty quickly, so I couldn’t use the wheels.

We struggled so much over the durability. Like the durability test I mentioned earlier, it would be expected to be used in many ways in a general household. It used to break even before the test. The mechanical team improved it by adding carbon to the resin, and finally it made it through the durability test. 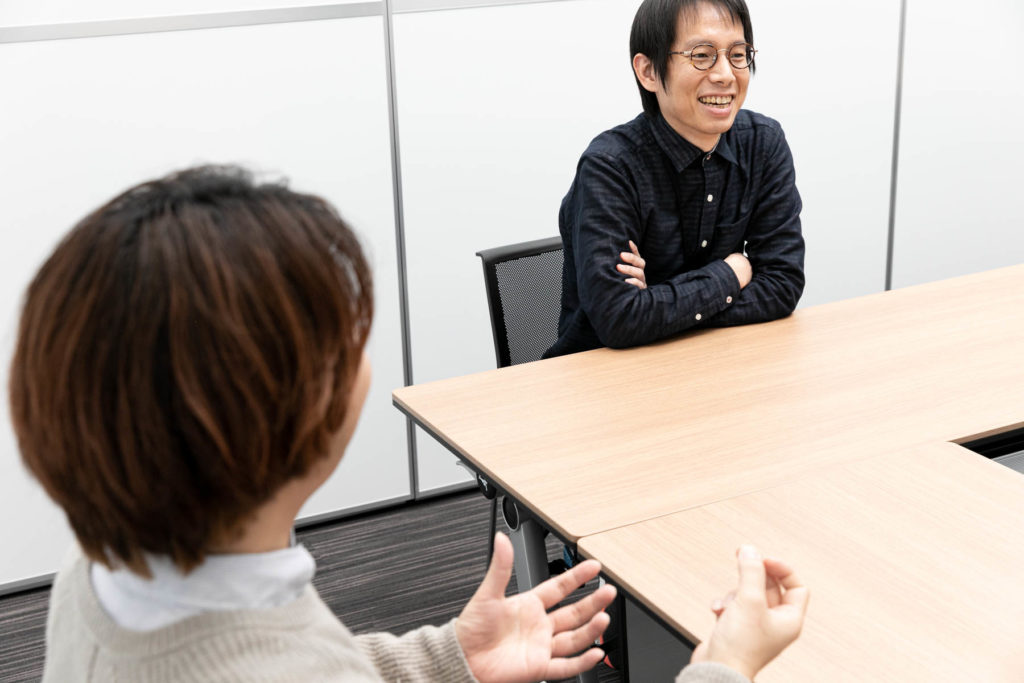 OTAQUEST: Do you have any technology which you wanted to add to the 1/8 scale Tachikoma but couldn’t?

Tsubasa Maruyama: In the anime, there are many Tachikoma and they are all connected to the cloud in order to synchronize information and knowledge, so we were originally planning to implement a public network such as 3G or LTE on the body so that they could always synchronize with each other…. But we ended up adding the feature to synchronize with AI in a different place through Wi-Fi.

OTAQUEST: If using the public network would have happened, what would have been possible?

Tsubasa Maruyama: The user’s initial setting would not have been necessary. Once you open the box and turn the power on, it immediately connects to the network and synchronizes with information already learned from different households, and you could start using it without changing any settings.

OTAQUEST: So, it would be possible if a big box suddenly gets delivered to you, and when you open the box, a beautiful girl is in there and starts moving.

Tsubasa Maruyama: I believe that’s the true IoT, but it was just my dream (laughs).

OTAQUEST: You two like anime in general, not just “Ghost in the Shell”. For the last question, can you tell me which anime you think are interesting as a developer?

Tsubasa Maruyama: “Time of Eve”. The world is presented where there is no distinction between human and android, and it happens that you think you are talking to a human, but it is actually an android. I’ve watched this so many times because the interaction between humans and machines in such world was interesting.

Reo Matsumura: From recent productions, I like “Kill la Kill”. While living fibers called “Life Fibers” from space are invading the earth, the main character decides to coexist with the clothes made of life fiber.

The interesting part was that the author decided to use clothes that everyone is familiar with instead of using some kind of technology as a metaphor of humans coexisting with something that has a mind and functionality. The idea of clothes that have functionality was great. It was an interesting production in terms of the IoT to see what kind of side effects it would have and what would happen when it was abused if such technology was available. Because I like “Kill la Kill”, I made real size full-metal replica props of Ryuko’s and Nui’s scissor blade by myself. Of course, at my own expense (laughs).

Tsubasa Maruyama
Electrical Engineer at Cerevo Inc.
He has experience in circuit design for vehicle electrical systems at Honda Engineering Co., Ltd. He is in charge of designing circuit boards at Cerevo.
CEO at Mirai Kobo