Couple of Cold Ones: Takafumi Sawa and Takekawa Shingo on Champion 50th in New Interview 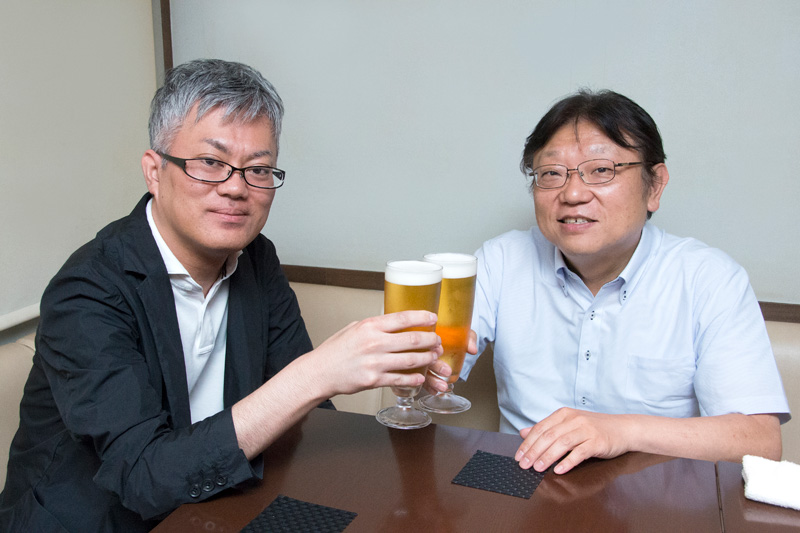 Weekly Shonen Champion’s 50th anniversary celebrations are coming to an end, so why not celebrate with a couple of cold ones with the boys? That’s exactly what current Champion editor-in-chief Takekawa Shingo and his predecessor Takafumi Sawa did last week, in a new interview where they discussed their respective long careers at Akita Shoten, the current state of the shonen magazine, and how best to continue forward.

Previous interviews organized for Weekly Shonen Champion’s 50th anniversary, such as with Weekly Shonen Sunday editor-in-chief Ichihara Takenori and Weekly Shonen Magazine chief Kurita Hirotoshi, have started with an affirmation that the editors of the main weekly shonen magazines see each other more as ‘comrades’ than ‘rivals’ – with the exception of Weekly Shonen Jump chief Nakano Hiroyuki, mind.

Obviously, it goes without saying that these two men share a strong bond of comradeship, having worked at the same office and on the same magazine together for some decades. But both had pretty high praise for the other, no doubt helped by the drinks that went down swimmingly during the interview.

Takekawa Shingo described Takafumi Sawa as ‘well-loved’ during his time as editor-in-chief of the magazine (2005-2017) by both the editorial team and mangaka – as evidenced by how so many high-profile creatives thanked Sawa publicly when he announced his retirement.

Such was the level of respect that Sawa commanded as editor-in-chief that Takekawa claimed that ‘If Sawa-san put his foot on the gas pedal, the whole of Weekly Shonen Champion would set off running in an instant,’ referring to how he would often try new things during Champion events with the editorial team as well as the authors themselves.

Yet, as he revealed during the interview, Sawa would often depend on Takekawa Shingo for advice in his capacity as assistant editor-in-chief, which allowed him to run the magazine smoothly on a day-to-day basis.

Sawa also describes Takekawa during the interview as ‘ambitious,’ a man who has ‘vision’ and his own sense of ‘cool’ – all of which allowed him to go against the status quo, which they would move on to discuss next.

That’s not to say, however, that Sawa himself lacks such an eye for creativity and talent – it was him, after all, who discovered Baki author Keisuke Itagaki through a one-shot and nurtured him throughout his entire career, leading to smash-hit series we have today.

The Image of Champion

Yet, as Sawa highlighted during the interview, Takekawa Shingo’s achievements are perhaps more impressive as he actively went against the status quo of the time in pushing Yowamushi Pedal and the image of Weekly Shonen Champion forward.

This is because many of the more popular shonen characters at the time were, as Sawa described it, ‘“no bulk, Johnny’s-esque’ (referring to the idol entertainment office Johnny’s Entertainment) – a far cry from the lean, lithe yet muscular athletic cyclists of Wataru Watanabe’s series.

Takekawa’s nurturing of more muscular series that went against the status quo during his time as an editor has been instrumental in forming the “rough and tumble” image of the magazine, which was also incited during the first interview with Weekly Shonen Sunday chief Ichihara Takenori.

That’s to say that, while Champion may have strong characters, they’re not exactly mean-spirited – rather, they’re kind as well as strong.

Takafumi Sawa affirmed this sentiment during the interview, saying that he wants Champion to be ‘a magazine that’s kind to losers.’

‘Saying to those people, “It’s okay,” is Champion’s role. ‘Cuz I’m a loser, Take’s a loser. No one knows about tomorrow. But making a manga magazine that’s be able to say, “Tomorrow will definitely come, it’ll be fun,” in that situation would be awesome.’

It seems both men are on the same page when it comes to what kind of manga magazine, and what kind of ‘image’ they want it to create, but how to go about actually making such a magazine is another issue entirely.

Some of the things that both Takekawa Shingo and Takafumi Sawa highlighted during the interview with regards to Weekly Shonen Champion’s production process do, however, show us how an editor might go about doing that. 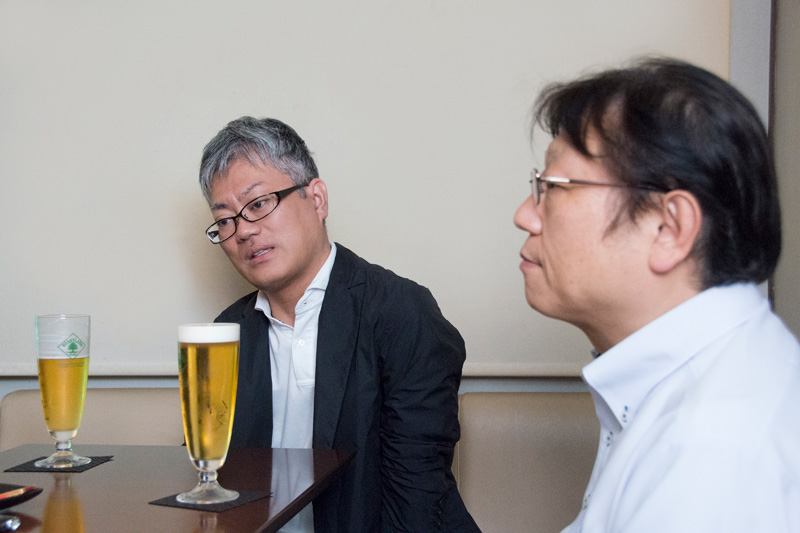 During his time as a regular editor under Sawa, one of Takekawa’s indisputably big achievements was getting Wataru Watanabe to come over to Champion and start Yowamushi Pedal, as stated earlier during the interview.

Yet, as Takekawa revealed during the interview, Watanabe was actually drawing Majimoji Rurumo for Kodansha’s Shonen Sirius at the time, and trying to get him to come over to Akita Shoten wasn’t exactly an easy feat. Getting hold of him was even a challenge, and he had to beg one of his co-workers to try and dig up some information on him to that end.

Even so, Takekawa never gave up and eventually got to meet with Watanabe face to face, which would then go on to be the basis of a very profitable partnership for both parties. 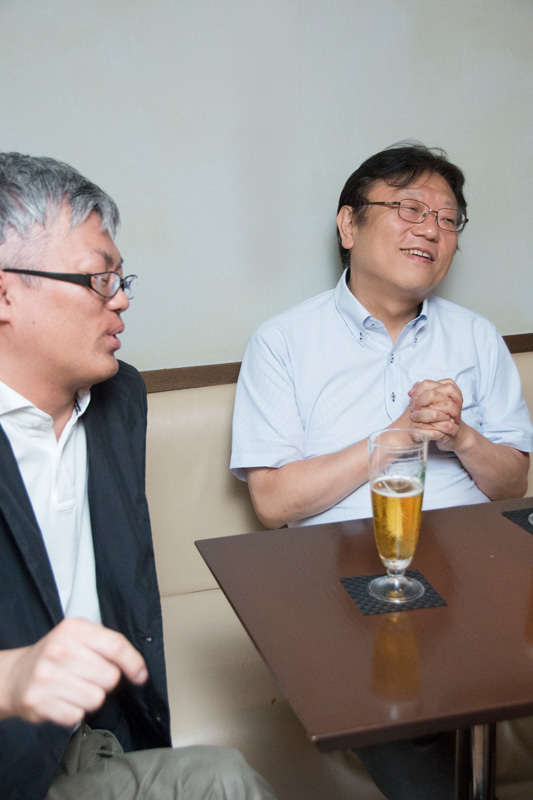 Takafumi Sawa couldn’t help but laugh at this story as it was told during the interview, as he actually told Takekawa to give up at once point, but also because he’d been through the same thing many times during his own career.

The fact that the editors over at Weekly Shonen Champion don’t give up on talent when they see it is clearly one of the main reasons why the magazine has been the home to such unique series over the years, such as Paru Itagaki’s BEASTARS as well as My Monster Secret (Actually, I am…) – which Takekawa also edited.

Yet, this more ‘loving’ production process has also caused Takafumi Sawa more than a few headaches. One particularly annoying situation that was constantly cited during the interview was when mangaka submit manuscripts that are different from the original drafts that the editor already approved.

It seems like this is almost universal over at Weekly Shonen Champion, as even their golden geese Baki and Yowamushi Pedal do this on a regular basis.

But, as frustrating as it may be, both Takekawa Shingo and Takafumi Sawa admitted during the interview that it allows for creativity, and is part of the reason why Champion has cultivated such a unique line-up and editorial ‘image’ over the years.

What is a ‘Shonen’ Magazine?

One of the consequences of trying to assemble such a unique list of properties is, however, a large variation in the type of stories that are brought in to the magazine.

This can lead some to express confusion at what exactly is and isn’t a ‘shonen’ series, as they can range from very adult to very kid-oriented.

Champion is no exception to this, but Takekawa Shingo was able to justify this in his previous interview with Weekly Shonen Jump editor-in-chief Nakano Hiroyuki by saying that their magazines don’t just target ‘boys’ (shonen), but those with a ‘shonen heart’ – which can be both older teenagers as well as adults.

Takafumi Sawa reaffirmed this during the interview, but said that his tenure as editor-in-chief saw him target 2nd year junior high students above all else, that is to say, 12 to 13-year-old boys.

Even so, as he clarified, this doesn’t mean that content not suitable for such an age range is necessarily a no-go. Rather, it depends on what kind of ‘drama or message’ is being expressed through such content, such as murder or suicide.

That being said, as both chiefs noted during the interview, Weekly Shonen Champion doesn’t have a lot of series where people die. This is quite different from other magazines, such as Weekly Shonen Magazine. Even Baki, a very violent series about martial arts and, at times, convicts on death row, contains only a few character deaths.

In reality, the definition of a shonen magazine is as varied as it is seemingly contradictory, but this doesn’t seem to worry Takafumi Sawa. During the interview, he described shonen magazines as “fields,” on which the manga as “produce” can be cultivated.

Continuing his metaphor, sometimes only a few pieces of produce interest a reader, and – at times – the field can look bare as new produce is cultivated. But this new produce can, given time, sprout and become a big hit.

Takekawa Shingo vs. the World

This is definitely the case with BEASTARS, which took years before becoming the big hit it is today, as well as the series that almost all of the other shonen magazine chiefs brought up during their interviews with Takekawa Shingo.

Towards the end of the interview, Takafumi Sawa had drunk quite a lot (this was being conducted in a bar near the Akita Shoten offices), so Takekawa Shingo was asked to finish up recent interview tour with a word on how it felt to meet all of the other shonen magazine editors. 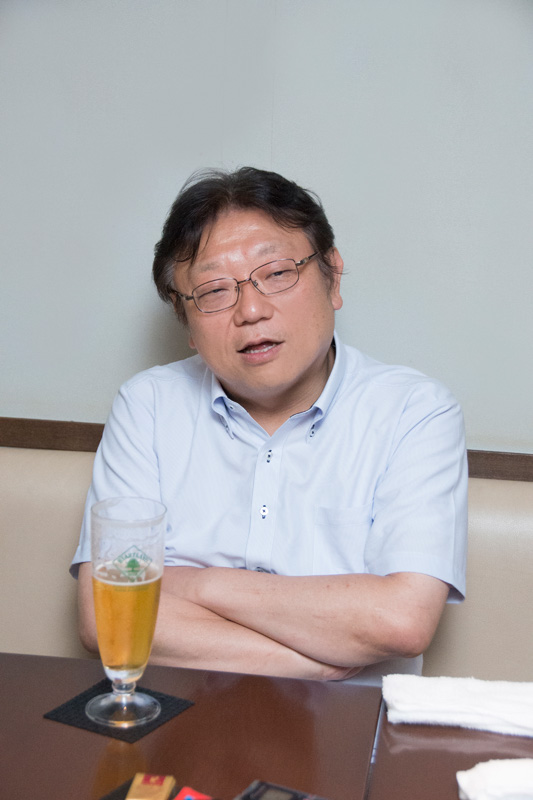 ‘It was interesting to see that, even with something as big as creating a weekly shonen magazine, everyone had the same thought process. I also realized that each magazine really does have its own character,’ he said.

‘While I was impressed with the differences between each magazine, I unexpectedly ended up thinking “Ah, Champion is actually alright the way it is.”’

It seems as if meeting the other editors and discussing their own image, goals and production processes has only reaffirmed Takekawa’s belief in his own, Champion way of thinking. He even said that he read the Kodansha ‘How-to Manga’ book given to him by Kurita Hirotoshi, but came away quite happy with his own team’s editorial method.

While Takekawa still feels that ‘comradeship’ he invoked during the very first interview with Ichihara Takenori, he also said that he definitely wants Champion to ‘reach the goal’ first and beat the others in the process.

He also hopes that he can continue to produce interesting manga for readers to enjoy, and if this interview with Takafumi Sawa has proven anything, it’s that he definitely has the expertise to do so. 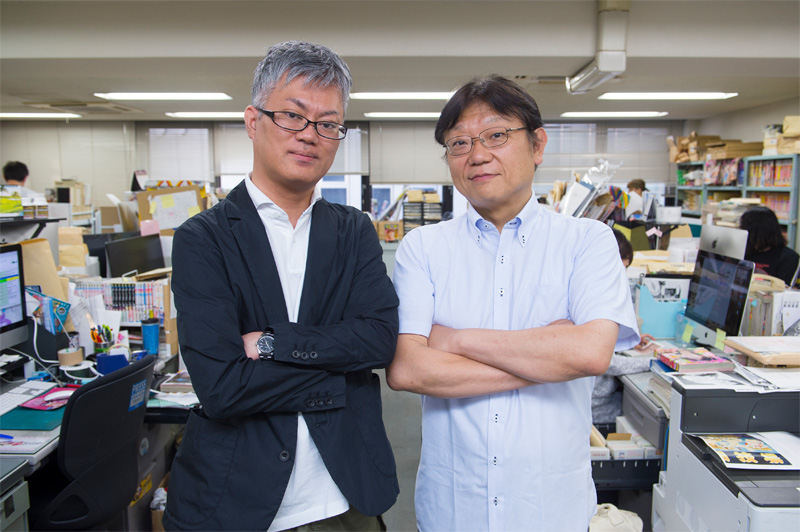