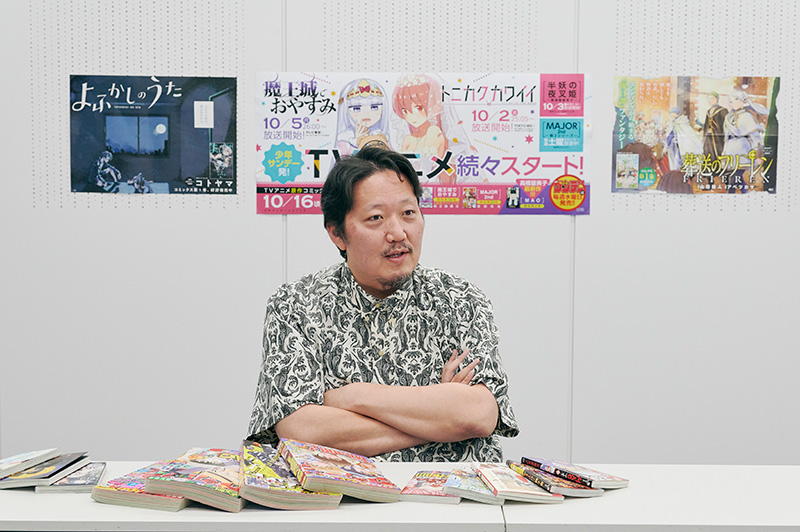 Takenori Ishihara came into the top spot at Weekly Shonen Sunday five years ago, promising to “revolutionize” the magazine and change it for the better. How has he fared? Comic Natalie recently checked back in with the editor-in-chief, following up on their interview in 2015. In it, Ishihara talked about the various changes he has made to the magazine, the editorial department, as well as his hopes for the future. A mere year after its 60th anniversary, Sunday is in safe hands.

First of all, Takenori Ishihara talked in the interview about how he has gone about changing Sunday for the better. While the editor came into the top spot with the idea of listening to more reader feedback and better supporting new artists, he quickly recognized that he had to deal with the “culture”’ of the Sunday editorial team first. This is because it is ultimately the decisions of the editors that shape the face of the magazine, as well as what kind of artists it attracts.

According to Ishihara, a lot of the editors at Sunday were “passionate” about making manga but lacked the “know-how” needed to properly develop new series or support new artists. Ishihara therefore took the decision to first define what they wanted as ‘Team Sunday’ and expressed that to each of his his colleagues face to face. During this time, he was also forced to look at every single one shot and approve it himself (this was because he didn’t believe in the “powers of observation” of the Sunday team at the time), but this extra effort was worth it.

Slowly, over time, Ishihara’s vision was adopted and the editor now believes Sunday to be in a much stronger place than it was before. That’s probably a good thing, as Takenori Ishara admits in the interview that Sunday was facing an “unprecedented crisis” in terms of both administration and management before he came to power – it was probably a good thing that someone as driven as he came along when he did.

With regards to Sunday’s newfound success, Ishihara sees the manga industry as akin to “agriculture”. By properly nurturing new artists and developing new series, it is possible to plant “seeds” that “sprout” in the future – as a result, Takenori Ishihara says in the interview that he sees his role as an “sacrifice” for the long-term success of Weekly Shonen Sunday. In other words, his revolution was necessary, but will not necessarily truly bear fruit for several decades.

Ishihara’s ultimate goal is to transform Sunday into “the strongest Japanese brand.” Yet, even he admits that he has tough competition: to win against other weekly publications like Jump and Magazine, it will take “at least 20 years.” Still, if the effort is put in, it is possible.

Over the course of his five years as the Sunday editor-in-chief, Takenori Ishihara has seen many series come and go. When asked in the interview which ones he had high hopes for in the future, his answer was very interesting: alongside more established series such as Detective Conan and MAO, he gave a special shoutout to Sousou no Frieren.

This fantasy manga by Kanehito Yamada (story) and Tsukasa Abe (art) has been garnering a lot of attention as of late, even receiving a Comic Natalie feature alongside the Takenori Ishihara interview. What makes Sousou no Frieren so significant is the fact that it came from exactly the kind of best practices that Ishihara worked hard to put in place, proving that they do work.

Ishihara describes the process of cultivating new creators as a “cycle”, whereby they spend about “three to five years” cultivating their skills with oneshots and attending “manga classes” with such legends as Gosho Aoyama and Kazuhiro Fujita before starting a serialization proper. After that, it usually takes around “four to five years” for a manga to get animated, which is when Shogakukan can see a “return” on their investment.

This is what is happening to Sleepy Princess in a Demon Castle right now, and it is as a result of this proper education and preparation that authors such as Kagiji Kumanomata can create such a successful series. The same goes for Frieren collaborators Yamada and Abe: both creators have been around Sunday for many years, writing for different magazines and in different formats. Yamada even illustrated one of their own manga before Frieren, called Bocchi Hakase to Robot Shoujo no Zetsubou Teki Utopia.

If Weekly Shonen Sunday can continue to cultivate quality new series such as these, there is no doubt that Ishihara Takenori’s lofty goal of becoming “the strongest Japanese brand” can come true sometime in the future. In the meantime, however, this gives a very different impression to the other weekly magazines, which often grind their authors to the bone without much regard to their health or wellbeing.

Sunday has a bright future ahead of it.

You can Comic Natalie’s Takenori Ishihara interview via their website.