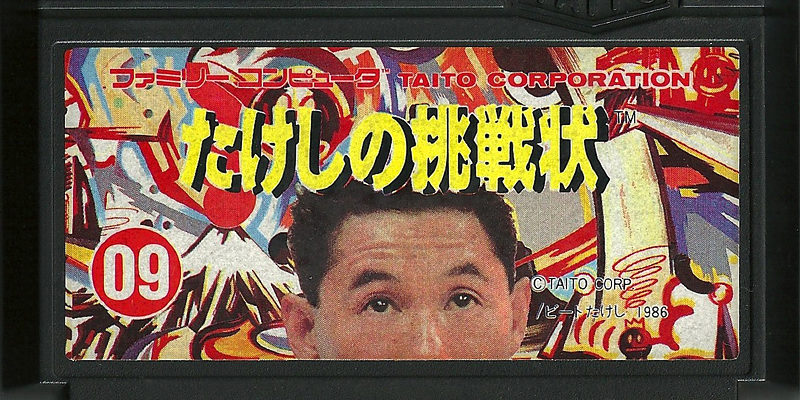 One of the few things gamers like to debate more than what they feel is the best game ever, is what they feel is the worst game ever. Many will look at games like E.T. for the Atari, citing its well-known failure and even mass burial among other failed Atari games in New Mexico. Others may cite something like Bubsy 3D, or even a random JRPG because it won’t let the player pet a dog. But a game that may go under the radar is Takeshi’s Challenge for the Nintendo Famicom.

In the 1980s, superstar comic Takeshi Kitano (more commonly known by his stage name ‘Beat Takeshi’) had broken up the act that rocketed him to fame as a manzai performer. Manzai is a traditional Japanese style of comedy performance that makes use of two performers speaking to the audience and playing off of each other. This style of performance dates back to around the 1100s in Japan, but contemporary acts are more reminiscent of acts like Laurel and Hardy or Abbott and Costello.

Takeshi’s group was called Two Beat, consisting of himself as Beat Takeshi, and his partner Beat Kiyoshi (The stage name of Kiyoshi Kaneko, also known as Niro Kaneko). After an attempt at acting in 1983 that failed to prove himself as a serious actor, he began hosting Takeshi’s Castle in 1986. Takeshi’s Castle was an intense game show that challenged contestants to a series of physical challenges in order to win money from Takeshi, who played the count of said castle. Around the same time, he was working with Taito to develop Takeshi’s Challenge for the Famicom/NES. 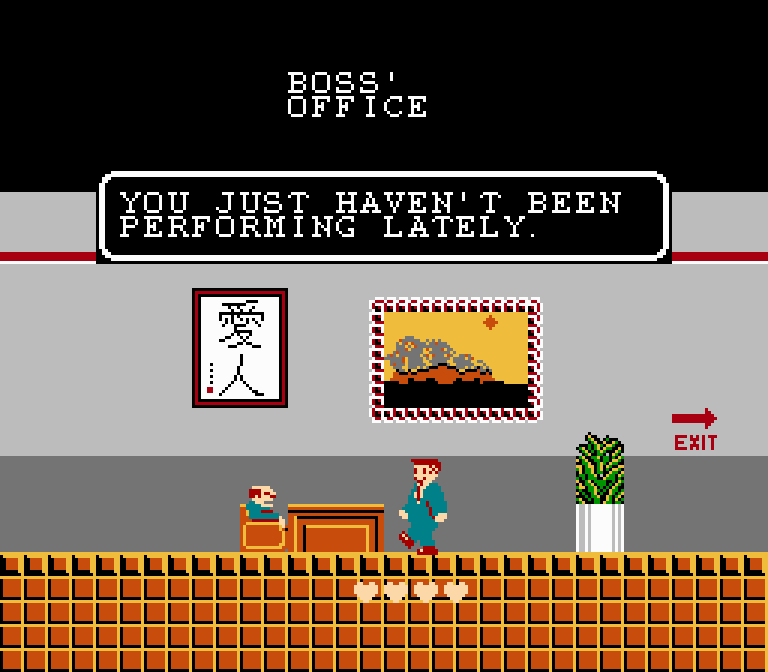 The Trials of the Salaryman in Takeshi’s Challenge

Takeshi’s Challenge follows the life of a salaryman in modern Japan trying to, well, navigate his own life. This 8-bit side-scroller gives notoriously little instructions or hints, or even context, as to who the player is and what they should be doing to advance through the game. The game hardly tells you what ‘advancing’ looks like. For all of its inscrutability, it does offer quite a bit to do. Players can engage in activities such as playing pachinko, singing karaoke, learning how to hang glide, quitting your job, punching people on the street, and divorcing your wife. There’s almost a sense of a prototypical open-world game given just how many options there are to waste time.

Despite the ambiguity of the game, there is a path forward, and several steps required to maximize one’s ability to do so. In order to beat Takeshi’s Challenge, players must divorce their wife, empty their savings account at the bank, quit their job, and win a karaoke competition. One of the unique aspects about the Famicom was the microphone embedded in the controllers. In order to win the karaoke competition, players must actually sing into the microphone. Not only do players have to sing well, they have to sing well on the same song three times in a row in order to receive a map from a mysterious old man. If players mess up one attempt, they must start completely over.

At this point, the player has options as far as how they want to decipher the map, which is initially blank. Out of the possible options, the only two that work are choosing to expose it to sunlight and dipping it in water. If players choose to expose it to sunlight, they must leave the controller alone for one hour, and if they choose to dip it in water, they must leave the controller alone for five minutes, but no more than 10, and then shout into the microphone. It’s unclear how players were supposed to figure this out, and the game seems less-than-concerned with giving out that information. Though to Takeshi and Taito’s credit, the commercials for the game technically included hints on how to beat it, but again it’s unclear how anyone was supposed to apply that information to the game itself.

The map leads to buried treasure, so the player then has to go to the travel agency, fly to the South Pacific, take Hang Gliding courses, make their way through a cave, and finally retrieve the treasure. Then fans are greeted with a pixelated version of Takeshi’s face offering them a simple ‘congratulations!’ and the game ends. There’s nothing past that.

Takeshi’s Challenge sold around 800,000 units, despite its lack of clarity and apparent disregard for the player. The Japanese gaming magazine Famitsu would later put it at the top of its list of ‘Kuso-ge’ or ‘Crap Games’. Fortunately, for adventurous gamers looking to take the challenge themselves, Takeshi’s Challenge is actually available for mobile download.

Beat Takeshi has stated in interviews that he hates anime and technology like computers and video games. The only other time he’s been involved with the video game industry was in 2016, when he appeared in Sega’s Yakuza 6: The Song of Life as an aging yakuza boss. This instance appeared more in line with his film career, where he directed and appeared in many crime dramas based around yakuza. His work on Takeshi’s Challenge, however, given the inscrutable and almost cruel nature of the game’s design seems like a blatant affront to gamers of the mid-80s who would bother themselves with playing such a difficult and bizarre game.

For a nationally acclaimed comedian, it sure is a weird joke to play.