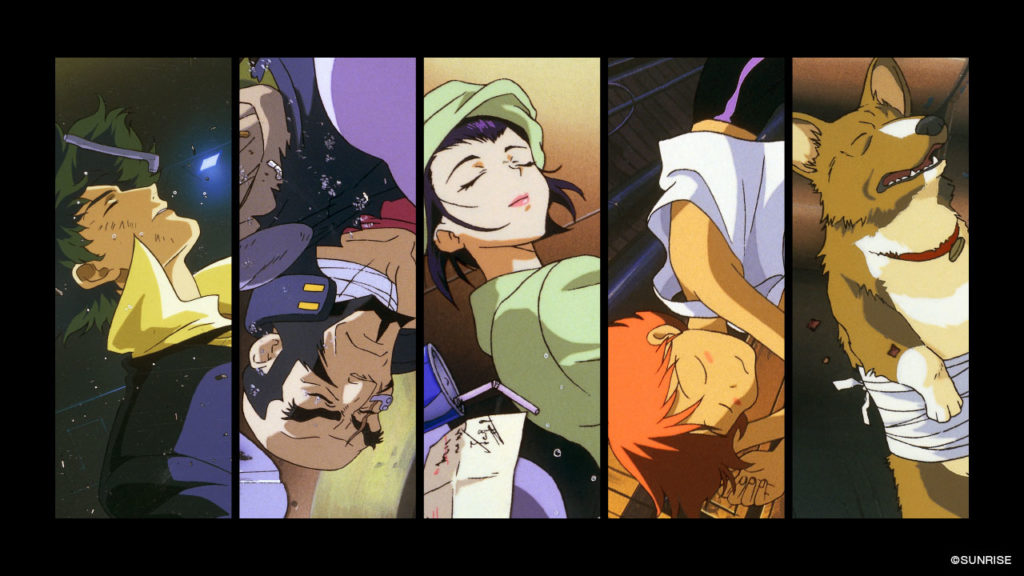 I’d like to introduce myself since I think some of you reading things might be new to me. I’m Taku Takahashi, and I have been in the electronic music group, m-flo, for 20 years. I’m an avid Trekkie and love Sci-Fi TV & movies of all kinds. Recently I have been really into the US shows “The Expanse” and “Orville”. I also love Sci-Fi anime and I’m here to write about one of my all-time favorites as it relates to my personal experience with it when it was first released.

If my memory is correct, it was in the evening when I was making m-flo’s track called “Been So Long”. I was stuck, so I decided to watch TV. After Neon Genesis Evangelion, the channel which was known to show the most interesting anime in the evening time was TV Tokyo, and “Cowboy Bebop” was on air at that time. The episode in question was number 11 which was the story of the creature crawling around the Bebop. It was my first time tuning in, and at that time I didn’t yet know the name Shinichiro Watanabe.

I was immediately impressed with the high quality of the art and the voice actors. The rhythm of the plots, the details of the mechanics, the rules of Sci-Fi, the background settings, I could feel from the first 5 minutes that everything was made very well. I was able to understand what characteristics each character has instantly. It was such a powerful production.

“Lupin The Third” had long been recognized as the prime example of anime for adults, and it was similar to that. For Lupin, the story is about thieves but for Bebop, it is about bounty hunters. The characters are in the opposite situation, but they have much in common about their atmosphere. This element is why I felt strong familiarity instantly.

What easily impressed me the most was the music. I was shocked that the episode ended with the famous classical ballet music, “Waltz of the Flowers” from “The Nutcracker”. Using classical music in anime was very unconventional at that time. Sure, There was also Beethoven’s 9th in “Evangelion” or “Legend of the Galactic Heroes”, but the way of inserting music in Bebop was innovative in that images changed to the music in a synchronous way.

Since that point, I had started to watch it every week. The second time I tuned in I watched from the opening, and I was even more shocked by the big band jazz tune, “Tank!” by Yoko Kanno and Seatbelts. I also noticed by looking at the title that all of the episode titles were named after music. When I realized that this anime has a close relationship with music, I felt an even stronger familiarity as a musician myself. I’m not an expert of every anime ever produced, so I can’t say with certainty, but “Cowboy Bebop” is definitely a pioneer for an anime with a strong connection to music.

What about the reaction of Japanese people to Cowboy Bebop at that time? To be honest, it wasn’t a big hit. However, it was very popular among my musician, designer, and creator friends. I don’t think it makes sense to call it a “cult” show, because the popularity has grown over time and to this day it’s still discovered and loved by young people. I have to urge anyone who hasn’t seen it to watch it even today, it holds up so incredibly well and doesn’t feel like a series made in the late 90’s at all.

By the way, if you’re a fan of m-flo the opening scene from our album “EXPO EXPO” where you hear voices in various languages, is a reference to the hyperspace gate from “Cowboy Bebop”.

After I finished the series, I discovered the name of the director, Shinichiro Watanabe. A few years later, my friend, Nujabes, contacted me for advice. We often talked about anime, and his favorite was the “Ghost in the Shell: Stand Alone Complex” series.

He asked me “Hey Taku, it’s about an anime, do you know Shinichiro Watanabe? He is making a new samurai anime, and I was asked to make music for it.” I immediately replied to him “You definitely should do it, he’s the creator of Cowboy Bebop!” When I think back on it now, it’s a nostalgic memory, but at that time I was definitely a bit jealous but also very proud of him. Even now whenever I hear “Shiki No Uta”, it reminds me of the conversation with him.

Samurai Champloo was also not an ordinary production. Where did the concept of mixing samurai and hip-hop come from? In case you didn’t know, the word “champloo” means to mix in Okinawan dialect.

The opening song by Shing02, “Battlecry”, was a big gamble at the time as the song was not considered a catchy tune for anime, but it was very cool. It just turned out that it was very ahead of its time, and the song ended up with its own legacy as a fan-favorite theme song.

Both “Samurai Champloo” and “Cowboy Bebop” might not be mega-hit productions in Japan, however, it has a strong audience among creators and discerning anime fans. Maybe we can say the same for “Space Dandy” and “Carole & Tuesday” which are both shows I participated in. They might not be instant mega hit productions, but they have been passed between generations of fans.

I think that the secret of Shinichiro Watanabe’s productions becoming a big hit worldwide is hidden in that concept. His productions are not something they see immediate popularity, but they remain enjoyable to new and old fans for a lifetime. Also, he creates something that breaches the lines where fans of anime and those who aren’t superfans can still enjoy it together. Precise plots, quality of art, a detailed Sci-Fi background, and dedicated music are always stuffed into his production. I’m proud to have been able to participate musically to these kind of shows.