Tales of Rebirth is the sixth installment in the Tales series. It was released on the PS2 in 2004 and re-released for the PSP in 2008, but this game never made it outside of Japan. Despite this, the game was celebrated by an international audience as an amazing game.

Tales of Rebirth, like other titles in the Tales series, is a JRPG. Rebirth is set in a world where humans, Huma, and beast people, Gajuma, coexist. Prior to the beginning of the series, the Huma tried to enslave the Gajuma but ultimately failed, and it led to the two races joining forces to create the Kingdom of Calegia. At the beginning of the game, the King, Ladras Lindblum mysteriously dies, which releases the Gajuma power known as Force unto the world and many Huma acquire the power; this sets the stage for a darker power to rise and plunge the kingdom in darkness.

This entry is applauded for addressing racism in its narrative as the events prior and during the game are rooted in wanting one race to reign supreme. The game depicts scenes where characters are discriminated against and shows the impact it has on them, mentally, emotionally, and physically. Some of the protagonists also struggle with their views on race; some unlearn their misguided hatred and others learn to embrace themselves for who they are. 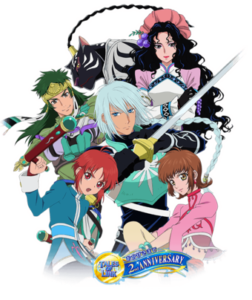 The duty of saving Calegia falls unto a group of mismatched individuals. The characters have their own reasons as to why they join the party. By the end of the game, it’s revealed that all the characters play a major role in the events of the game.

Veigue is the protagonist of the series; he’s very standoffish and is very intimidating. Around his childhood friend, Claire, he softens a bit and is very protective of her. Throughout the game, he makes friends and begins to put his guard down.

Claire is Veigue’s childhood friend, and she’s very kind-hearted and sees the good in everyone. She’s also very determined and makes the best of a bad situation by finding ways to help people in need. Despite being a main character, Claire is absent from the mainline plot, but she plays a critical role in the game.

Mao is an amnesiac child who travels with Eugene who Mao sees as a father figure. Mao is very knowledgeable about Force and serves as the team’s go-to for Force training. He also lightens the mood with his cheery demeanor and cute charms.

Eugene is a spear wielding Gajuma who is an ex-soldier who was forced to resign under mysterious circumstances. He was a respected and admirable commander during his time as a soldier and many still admire him even after his discharge. He travels around with Mao and sees him as a son.

Annie starts off as an antagonist who has a deep-rooted hatred for Gajuma due to her father’s murder at the hands of a Gajuma. She overcomes this hatred by the end of the game once she learns the truth of her father’s mysterious death. As the daughter of a doctor, Annie is very knowledgeable in medicine and heals the party.

Tytree is a hot-blooded factory worker whose sister is kidnapped and joins the party to rescue her. He has a strong sense of justice and often speaks out against the problematic mindsets of the people they encounter throughout the game. He is a bit stubborn and will often try to turn a negative situation into a positive one.

Hilda is another cold, standoffish character who happens to be a fortune teller. She originally starts off as an antagonist, but later joins the party. She’s half Huma and half Gajuma which leads to her being discriminated against on both sides but learns to accept herself throughout the game.

Agarte is the daughter of the late King Ladras. She’s easily manipulated due to her love for Milhaust and her want to become a Huma so she could be with him as an equal. Since she was raised as a noble, she is reserved and pure.

Milhaust is the main general of the Calegian Kingdom and serves as a main antagonist. He doesn’t actively go out of his way to interfere with the party, but will intervene when it’s about Calegia. Depending on the situation, he will either attack or aid the party, but ultimately helps the party.

Zilva is the main antagonist of the game and hides in plain sight. She serves as the royal adviser and uses her position as adviser and as Agarte’s motherly figure to manipulate Agarte into setting the events of the game in place. She’s unapologetic in her actions and craves a world without Huma.

Why It Wasn’t Released Internationally?

There isn’t a definitive answer as to why Rebirth was never released outside of Japan, but people have come up with their own reasons; some of these range from the lack of popularity to the focus on porting the game to the PSP. In 2018, the producer of the Tales series, Yusuke Tomizawa did an interview in which he stated that they’re working on remasters and remakes of the fan favorite games. While Vesperia was already remastered, there is no news of the other projects they have in mind. Fans can only wait and hope that the producers remaster this entry and release it internationally.