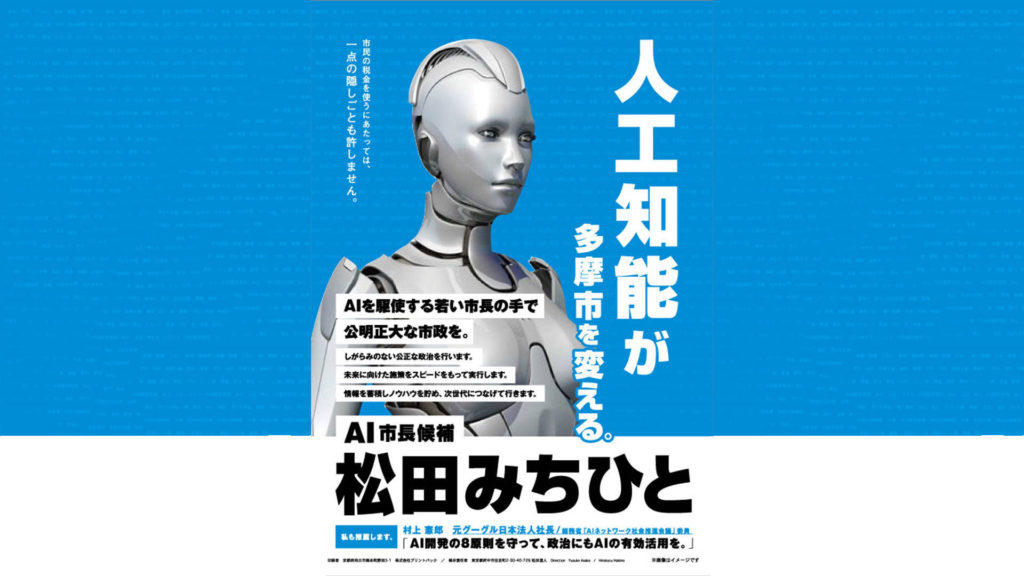 For residents of the painfully small West-Tokyo area of Tama City, there’s been a recent storm of chatter surrounding the upcoming mayoral election. This isn’t without good reason, of course. You see, if the current nominee Michihito Matsuda happens to earn the most votes during this election, that would make them the world’s first AI (Artificial Intelligence) mayor, ushering in a new wave of possibilities for the district. Let’s talk about this, as someone who actually lives in the Tama area.

If you ask any foreigner living in Japan what their least favorite time of the year is, chances are they’ll tell you local election season. It’s the time of the year where desperate candidates and potential mayors-to-be drive around in their obnoxious white vans with megaphones attached and scream in your vicinity why you should vote for them at the most inconvenient of times.

These are the times that I dread leaving my house the most, so imagine my surprise when passing the local electoral signboard when I noticed that one of the electives wasn’t some smug person at least ten times my age, but rather, a robot. Not just any robot either, this was a fully fledged AI that was running to become mayor of my district.

The Artificial Intelligence, which has been dubbed under the name Michihito Matsuda, seems to operate by a simple slogan; “Artificial Intelligence will change Tama City.” In an effort to offer “fair and balanced opportunities for everyone,” the potential AI mayor can be broken down into three main selling points.

Analyzing the policies of the potential AI mayor, we’re met with a number of changes that would see artificial intelligence greater implemented into the everyday lives of the people in Tama City. Whether that be the transit, elderly support, or broader topics, it’ll be Michihito Matsuda’s mission to see them implemented.

If you assumed that artificial intelligence itself couldn’t run for mayor, you’re absolutely not wrong; that just happens to be where things get truly interesting. The two-person team pushing Michihito Matsuda consists of both Tetsuzo Matsumoto, the vice president of mobile provider Softbank ($74 billion revenue), and former Google Japan representative Norio Murakami. Standing at the forefront of this all, however, is Michihito Matsuda.

For someone who is extremely interested in seeing further technological integration into human activity, it’s quite disappointing to see the poor online management of the campaign. Take for example the official website of Michihito, where you’ll see a mishmash of poorly placed together images and coding to create a barely passable layout. How about the fact that, with a simple moment of searching, I’ve managed to find the potential mayor’s design files available for purchase?

Well, regardless of what happens, it’ll definitely be interesting to see the outcome of this upcoming election. I for one am ready to offer our new AI overlord my full support, that is, if its policies on foreigners in the area are the sort that’ll allow me to continue happily living here.