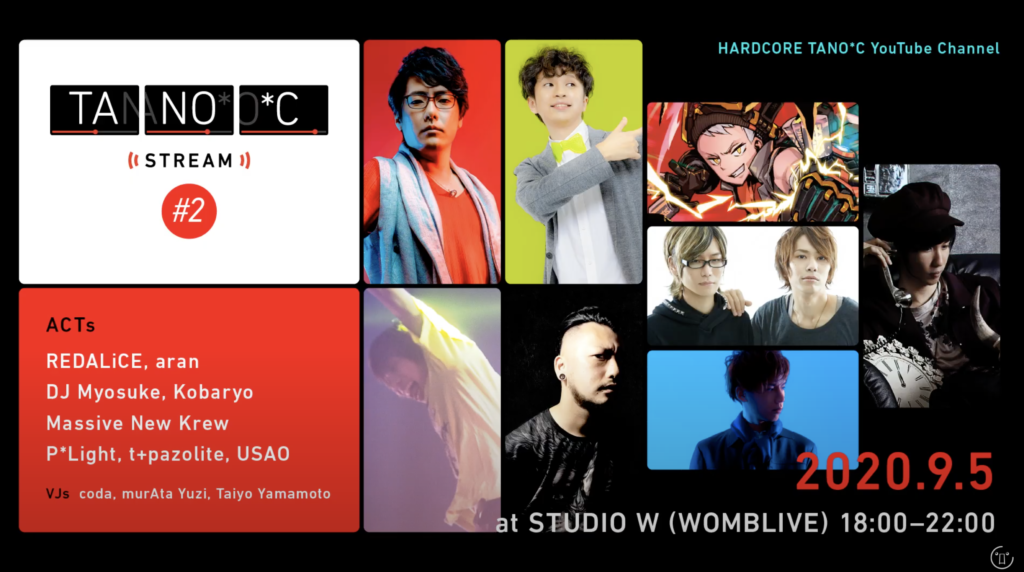 HARDCORE TANO*C is one of those names which is synonymous with the Japanese hardcore scene, being a pioneer in bringing and expanding the genre throughout Japan. I would challenge you to try to find anyone who listens to Japanese electronic music who doesn’t at least know the HARDCORE TANO*C name. They play host to a number of artists who’s sound has crossed the oceans such as DJ Genki, DJ Noriken, aran, USAO, Kobaryo, Massive New Krew, DJ MYOSUKE, t+pazolite and more.

On September 5th, the label held an online event at STUDIO W (WOMBLIVE) in Shibuya, Tokyo which showcased each of their artists as well as premiered a number of new songs which the artists have been hard at work on. The show spanned a little over 4 hours total and is available on YouTube to watch if you so desire to, I promise, you won’t be disappointed in the least.

At the end of the event, label head REDALiCE took to the microphone and talked a bit about the event and what the crew has been working on just to lead up to a major announcement of each of the HARDCORE TANO*C artists releasing a brand new solo album. With M3 and Comiket being canceled this year, this is a major announcement. But that’s not all, all of the albums will be coming out on the same day, January 4th, 2021. Dubbing the release “TANO*C Super Release”, this is something that isn’t really seen too often in the music industry where each of a label’s representative artists releases their own brand new album all on one day.

They didn’t announce the titles of any of the albums, but I’m sure that we’ll be getting some more of that information as the January 4th TANO*C Super Release draws a bit closer. Who knows, maybe we’ll even see some of the tracks show up in HARDCORE TANO*C and MARVELOUS’s game WACCA Lily which is slated to release on September 17th. Either way, I’m super stoked that I get to hear more songs from this great label.