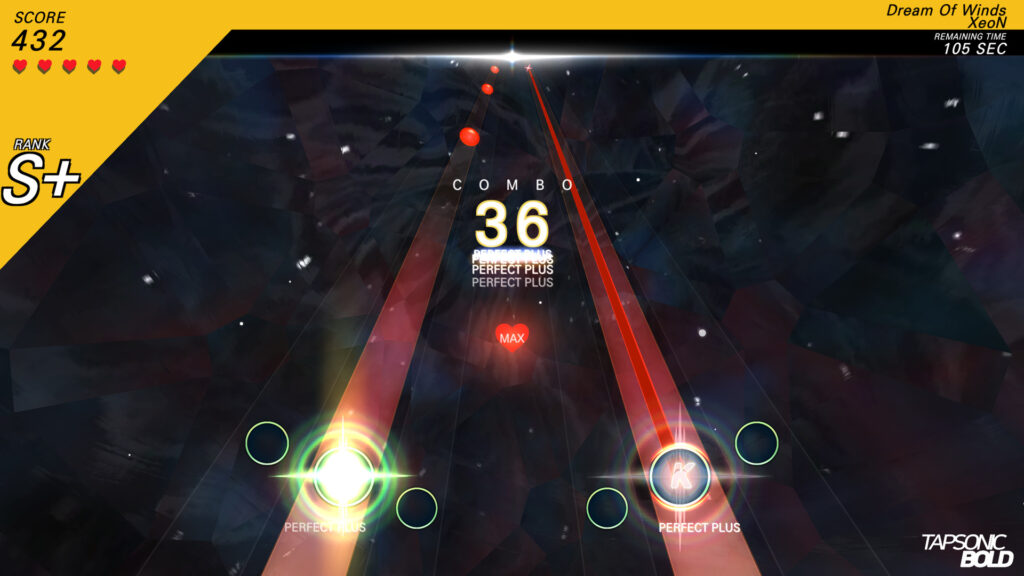 Earlier last week, DJMAX developer NEOWIZ added the STEAM page for TAPSONIC BOLD. TAPSONIC BOLD is their new PC title based off the mobile versions in the series. Four difficulties are included with also 2 game modes. On Reddit, one member of the TAPSONIC BOLD team took to the comments and introduced the game with more detail.

“Currently, the game is based on SOLO PLAY, but we give out 4 difficulties for each tracks, and other than the consecutive course that we give out basically, user can set their own course of tracks and difficulties and play on. We call that MASH-UP. We also added RANKING SYSTEM using Steam’s LEADER BOARD. It’s basically the sum-up of scores of the track’s each difficulties. With MASH-UP, you can also be on LEADER BOARD for the full course (how many it may be). We are also planning for users to create their own MASH-UP and put it on the RANKING as well.

You can play TAPSONIC with Keyboard! Needless to say, you can chance control keys in Settings and how you control interfaces. In the official launch, we plan to support various controllers including PS4, XBOX or STEAM controller. In our early access version, we are going to provide 36 tracks, including 2 original tracks for TAPSONIC BOLD. We are going to service more tracks in the up-coming official version as well, so please, try our game, and send us some feedbacks!”

On the Steam page, NEOWIZ updated announcing a small delay.

“We’ve some issues with release date and Early Access process on store.
We will announce again as soon as possible after we get confirmation from Steam, We will announce & try to release our game. (guideline says it may took around 2-3 days)

We are deeply sorry for this issue and thank you for all of your patience.”

We’ll update you with any news moving forward!