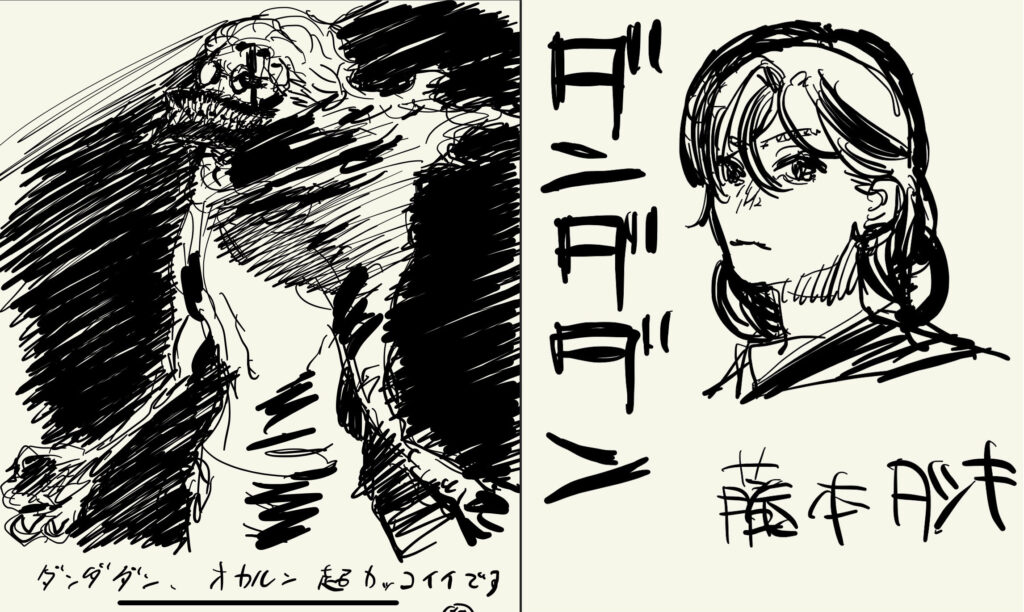 Tatsuki Fujimoto (Chainsaw Man) and Yuji Kaku (Hell’s Paradise: Jigokuraku) have penned special illustrations to promote the new series Dandadan, currently tearing it up on Jump Plus. It was already public knowledge that series author Yukinobu Tatsu had worked as an assistant for the two authors in the past, but this just strengthens the connection even further.

Both illustrations were shared via Dandadan series editor Shihei Lin’s Twitter account, who also supervised Tatsuki Fujimoto and Yuji Kaku in the past. Behind the scenes, he’s known as Jump Plus’ ‘hit maker’; he also edited Tatsuya Endo on SPY x FAMILY, so he definitely deserves that moniker!

In any case, both artists took on characters or creatures that have appeared in Dandadan thus far, with Yuji Kaku depicting series protagonist Okarun’s ‘turbo granny’ form first of all. The caption reads ‘Dandadan and Okarun are super cool,’ but it looks terrifying, to be quite honest.

Tatsuki Fujimoto, meanwhile, chose to draw the series’ other protagonist Momo in his typical sketchy style. There’s a hint of Reze in there from Chainsaw Man if you squint your eyes hard enough, which isn’t exactly surprising given that Yukinobu Tatsu once worked under him.

Lin’s tweet says Tatsu worked as the ‘main assistant’ for both Tatsuki Fujimoto and Yuji Kaku in the past, providing a bit of clarity to our previous Dandadan article, which suggested that Tatsu had only worked under Fujimoto with Kaku. It isn’t necessarily false that they worked together, but it’s important to note that he also worked for the Hell’s Paradise creator.

Undeniably, Tatsuki Fujimoto and Yuji Kaku’s early promotion for the series played at least some part in the reason why Dandadan blew up the way it did, but it has continued to grow from there. As of the time of writing, the series is about 22,000 pageviews away from surpassing the 1 million mark. It’ll certainly be interesting to see whether these illustrations can push it over the edge, putting it on track to match the early success of Kaiju No. 8.

Dandadan is serialized on Jump Plus. No word on an English release just yet.

Update: Tatsu also draw an illustration of Gabimaru and Denji to thank Fujimoto and Kaku for their support. It’s pretty cool!