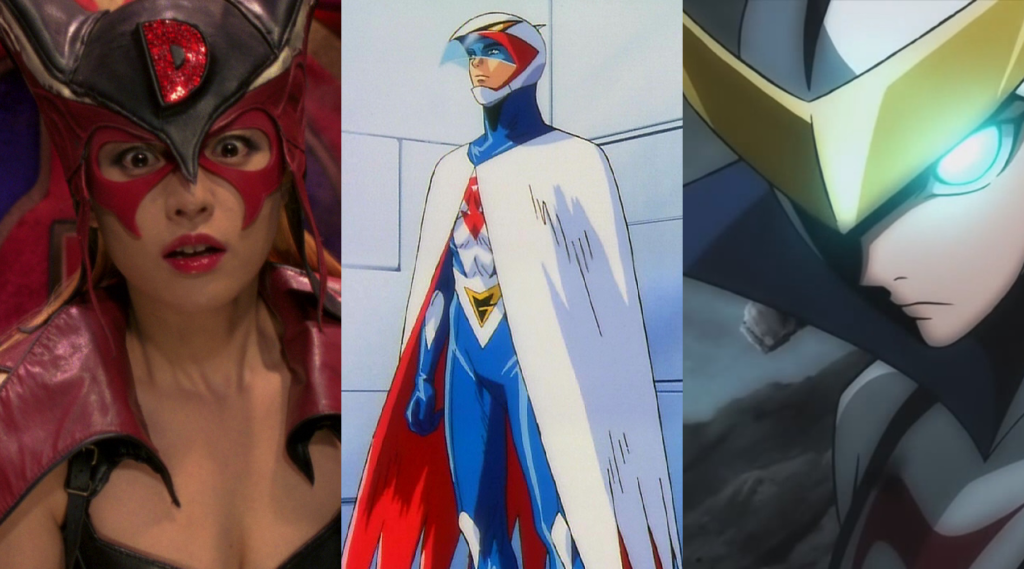 As I see the return of The Animaniacs promoted in my Playstation 4 TV video section, (not an anime, yes, but everyone does keep sharing around that Gainax-inspired screenshot) I’m once again reminded that we’re dominated by a culture of remakes, sequels, and the like. It’s not American narrative art alone going through these pains; In just the last two days, we’ve run articles on both the upcoming Tokyo Babylon, originally an early 90s OVA based off a Clamp manga, and the Netflix live-actionization of Cowboy Bebop, a familiar late 90s phenomenon. Avoiding remakes all together in protest isn’t the smartest call, because then we wouldn’t have all the wonderful iterations of Devilman that are equally worth watching. Make it known that I object to the ‘bringing it back’ as the default mode of entertainment and consumer art it has been, and I want to see less of it.

The big however that I’m slapping onto this that renders the whole first paragraph useless is that I give Tatsunoko Production the pass to do it every time. 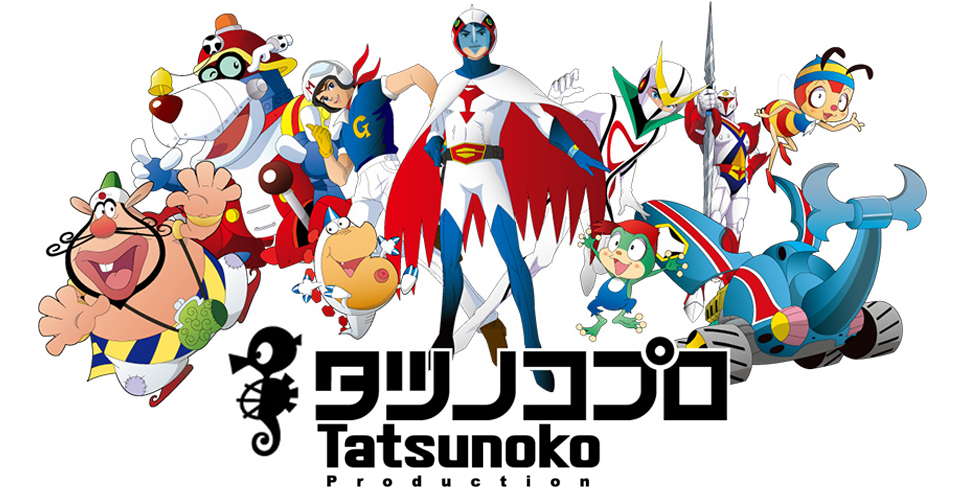 A studio much less appreciated in the west than it should be, Tatsunoko Production boasts one of the longest and richest histories out of anime animation studio. For god’s sake, they created one of the two anime your Grandparents watched when they were kids, the iconic Speed Racer. Similar to how Trigger produces animation for different shows but then also have their capital S and capital T Studio Trigger shows, in Tatsunoko’s Golden years, the studio excelled at a specific type of anime they would come to be known for: Super Hero Anime popularized throughout the 70s.

Hurricane Polymar, Space Knight Tekkaman, and their flagship Ninja Science Team Gatchaman! Through the quirky naming convention alone you can picture what these shows were like. Men in bodysuits fighting dastardly villains, some like Yatterman more comedic and others like Neo Human Casshan having more of an edge even then. These shows did well throughout the 70s, but by the 80s, in part due to the influence of Mobile Suit Gundam, fans wanted less ‘Ninja Science Team’. Real Robot became the trend and Tatsunoko moved onto creating shows like Super Dimension Cavalry Southern Cross, best known getting absorbed into Robotech. When the 90s came around though, and before it became the popular thing to do, the remake bug bit Tatsunoko. 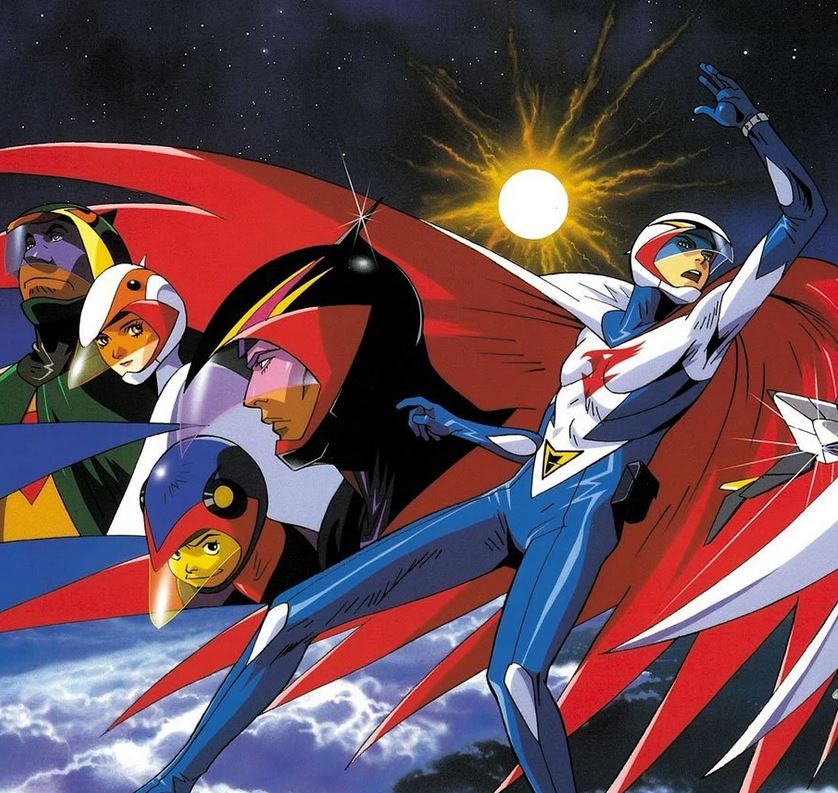 No, you silly Millennial-aged anime fan! Gatchaman wasn’t a show that came out in 2013 that had a banging soundtrack and an almost begrudgingly pleasant Super Flat art style; at least it didn’t use to be. Alternatively known as G-Force and Battle Of The Planets (thanks to multiple attempted Americanizations of the years), Science Ninja Team Gatchaman is essentially the Dragon Ball of Tatsunoko shows: the tent-pole production by the Studio that achieved widespread popularity, setting the course for everything that came after. Of course, Gatchaman was in the running whenever the bigwigs at the studio, or perhaps their sponsors, flipped the big ‘Remake’ switch still used in the studio today. It wasn’t the first of their old shows they’d doll up. That honor goes to something called Oraa Guzura Daroo, and even amongst their hero line Tekkaman and Casshan got in on the action earlier, but Tatsunoko did a particularly excellent job making a kids’ show from 1972 palatable.

Similarly to the Casshan: Robot Hunter OVA which predates the 90s Gatchaman OVA series by just over a year, the 1994 take on the Science Ninja Team ups the over-all maturity some, peppers in some mood and atmosphere a toy advertisement show from 1972 wouldn’t have, and sacrifices exactly none of the ridiculous setup: Five heroes who dress up in silly (meaning cool) outfits to fight an evil organization who simply wants to take over the world. Though they dropped that phrase ‘Science Ninja Team’ from title, it’s a great blend of the best that 90s edge and 70s camp has to offer. Seriously, they still call the bad guys ‘Galactor’, but at the same time, just seeing the exquisite Yoshitaka Amano characters dive and swoop and punch and kick is a delicious treat. Tatsunoko wouldn’t only continue their tradition of honoring the old while making it approachable for the new, they would make an art form out of it. 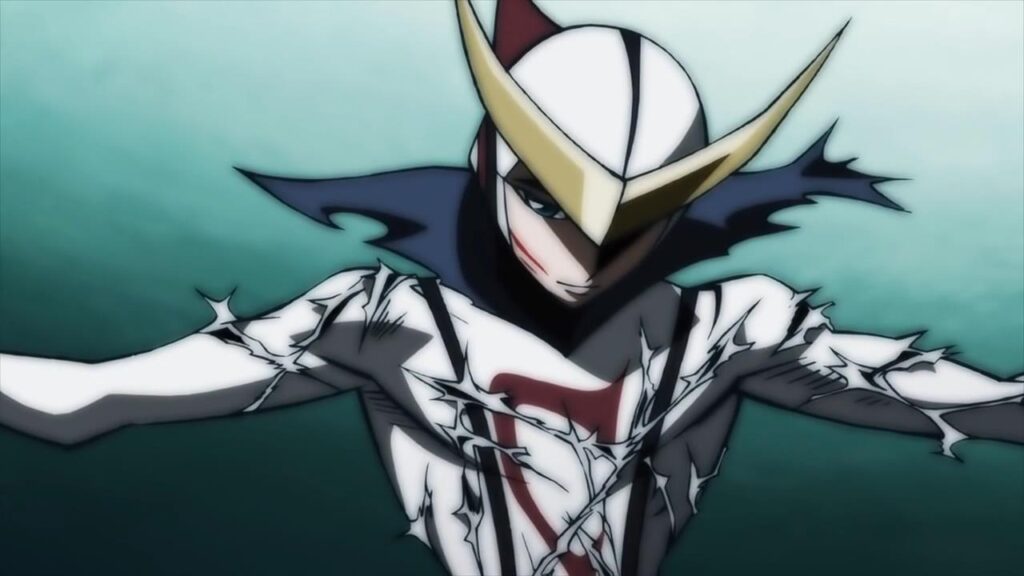 Gradually Tatsunoko’s art of remaking evolved into a looser art of reimaginings, which arguably pinnacles with the second resuscitation of Casshan, now romanized as Casshern. Casshern Sins remains one of the best anime of the 2009s and, perhaps with the exception of the Rebuild of Evangelion films, it might be anime’s best remake. I would say it’s even better than Devilman Crybaby but is, at the very least, on par with it. While the original is somewhat post-apocalyptic, Casshern Sins really focuses on ‘this’ being the end of the world. The damage has been done, humans are rumored to be extinct, and all the remaining robots can’t do anything but sit as they slowly rust to death. Post-apocalyptic meditations aren’t the only twist, but this time around it’s apparently Casshern’s fault the world is ending in the first place; This isn’t just a Fist Of The North Star post-apocalypse; it’s also a spiritual one. These high concepts coupled with the Cowboy Bebop episodic structure, which are brought to perfectly fluid life with Yoshihiko Umakoshi’s stylish designs (also found in Heartcatch Precure!) makes Sins a diamond in some intentional rough. 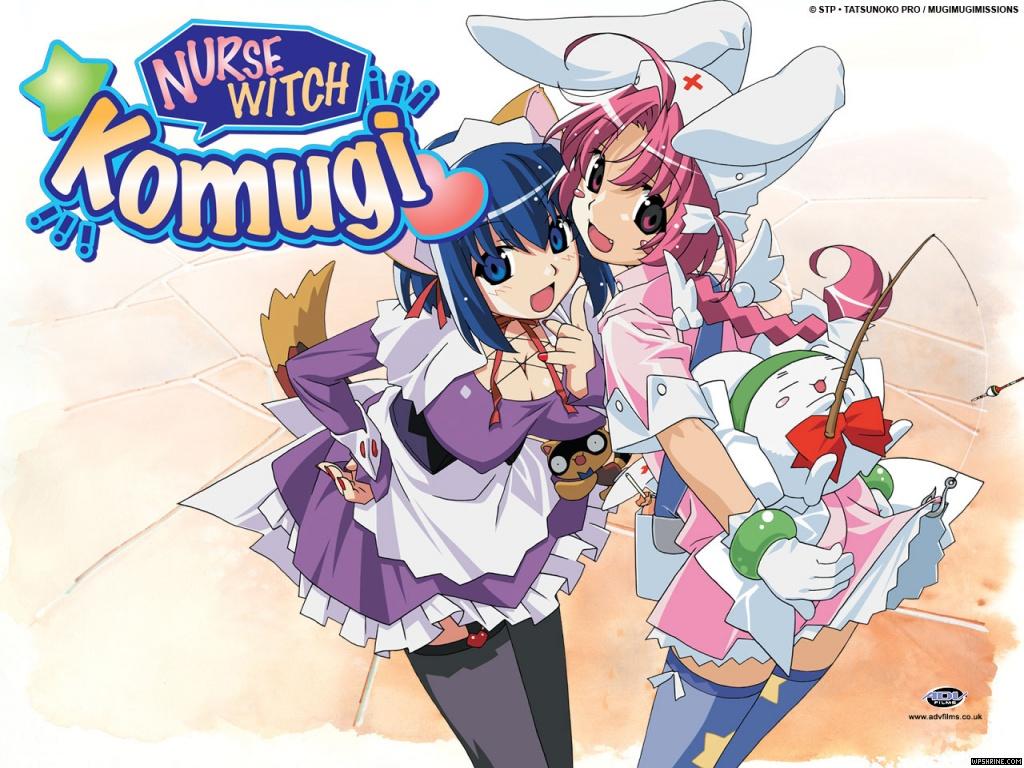 One of Tatsunoko Productions’ all-time best reimaginings comes in a packaging you wouldn’t expect. 2002’s Nurse Witch Komugi was an alternate universe spin-off of the studio’s 2001 The Soultaker, which itself was a darker and non-specific rebranding of the animation studio’s 70s shtick. Now, Tenchi Muyo and Fate / Stay Night have also done the magical spin-off thing, but Nurse Witch Komugi wasn’t just content to slap some cute outfits on The Soultaker’s ladies. Rather than poking fun at mahou shoujo, it aimed to satirize and lay commentary on otaku sub-culture, idols, and even Tatsunoko itself. The titular Komugi, voiced by the legendary Akihabara Idol Haruko Momoi in a bit of inspired casting, communes with Hikkikomori, turns Tokyo Big Sight into a Giant Robot, and even becomes the entire Gatchaman team at one point! The show’s packed to the tips of its magical girl frills with heart and charm, and generally more remembered than its original series. Perhaps that’s what lead Tatsunoko into reimagining their previous reimagining in the form of 2016’s Nurse Witch Komugi R, which unfortunately is best left forgotten. 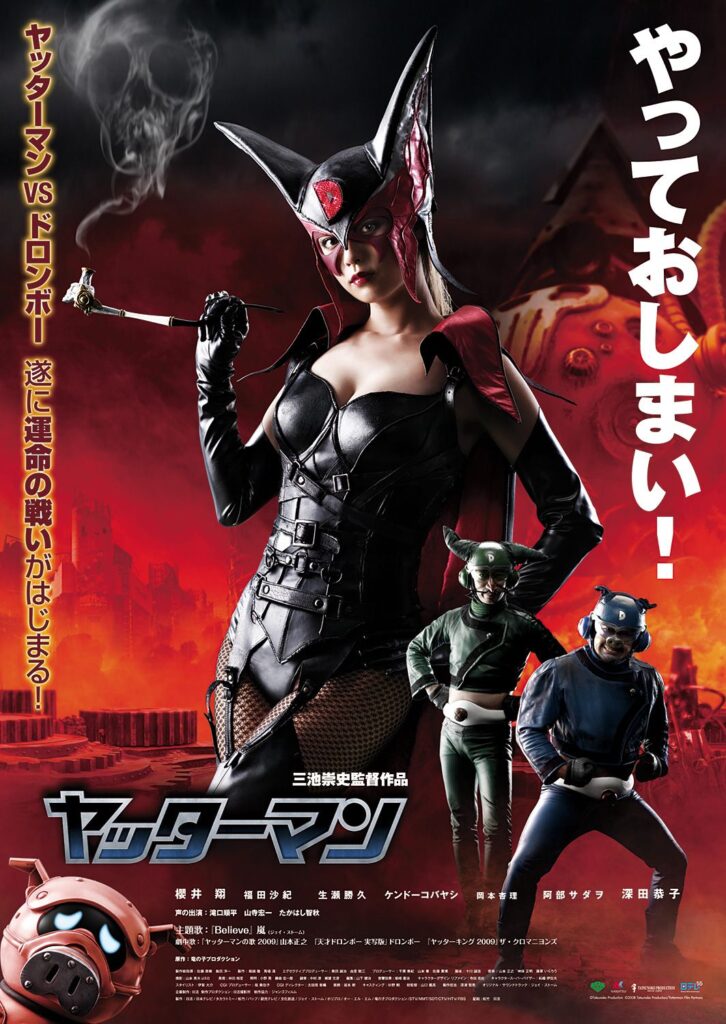 What shouldn’t be forgotten, however, is the 2009 Takashi Miike live-action adaptation of Time Bokan: Yatterman, simply titled Yatterman. Endearingly sticking to the anime convention of ‘who cares if it doesn’t make sense’, Miike captured everything that made 70s anime delightful and immortalized it onto film with actual actors. The director of the seminal Ichi The Killer also directed a film with a giant dog robot straight out of Hannah Barbara who fights the criminals in the poster above.

Equally great to the Yatterman was a film that came out just a year before, but on the other side of the Pacific. Though it bombed upon first release, time has been very kind to The Wachowski’s Speed Racer, which has developed quite the cult following. Made with love, Speed Racer truly is the spirit of classic anime with a Hollywood budget. While neither of these films were actually made in-house at Tatsunoko Productions, they both succeed as adaptations because, instead of trying to shower these stories real-world drab, they preserve the soul, intent, and even atmosphere of their originals. 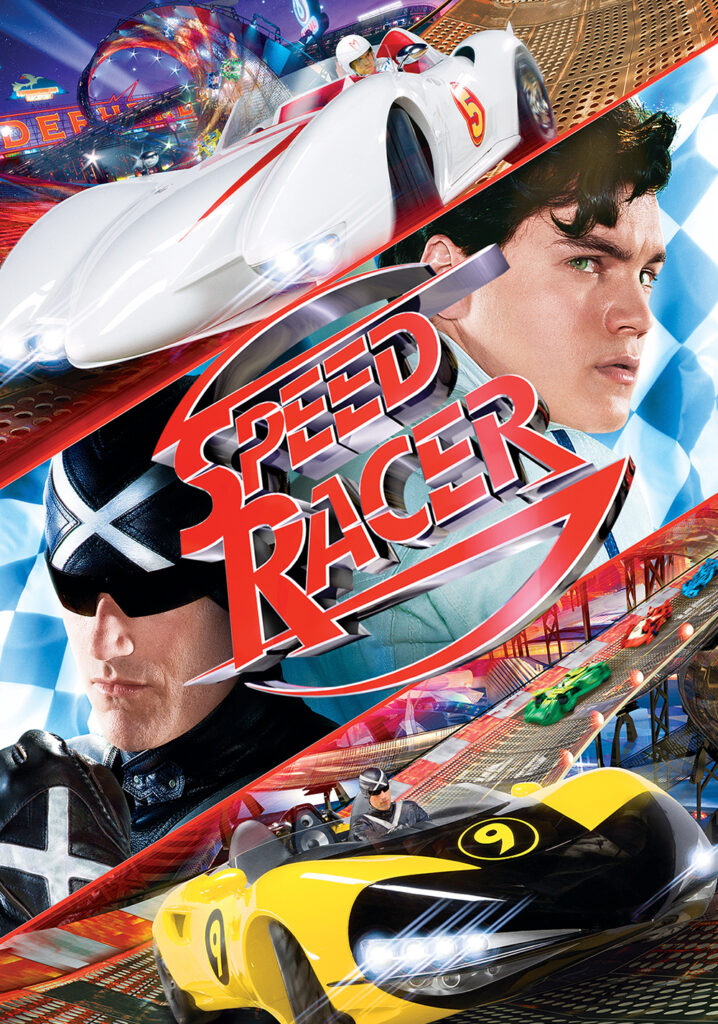 From the Super Flat excellence of Gatchaman Crowds to a young girl’s journey against oppression in Yatterman Night, Tatsunoko continued putting out ambitious reworks of their old favorites that didn’t just seek to cash in on their predecessor’s names through the 2010s. Most recent is Infini T Force: an Avengers-style Tatsunoko crossover show aimed at kids, and god, do I want a Big Boy version of this.

Tatsunoko’s attempts at reinventing their own wheel have often been inspired and attempt to tell their own stories with distinct visual styles. Some are better than others (again looking at you Nurse Witch Komugi R) but more often than not, they’re worth going out of your way to watch. I hope to see more of these in the future. If we’re doomed to be swamped with sequels and remakes anyway, let’s at least make them count!

Note: One last aside, give us more of this too, damnit! 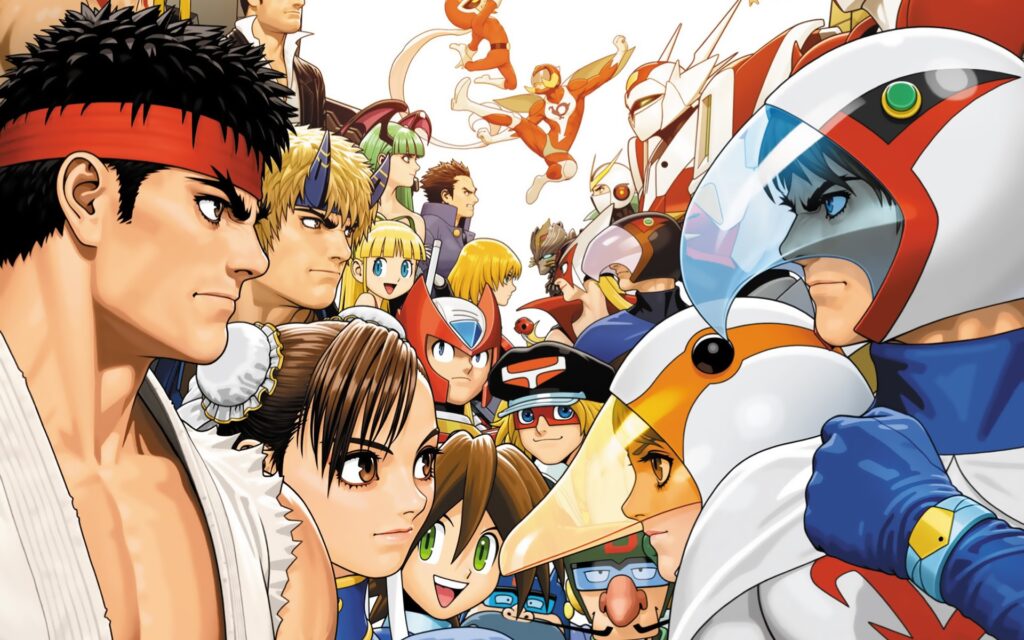 Casshern Sins Is a Bleak Tale Supported by Its Characters

Bird-Themed Heroes from the ‘70s: Gatchaman

other Chris Cimi 4 years ago