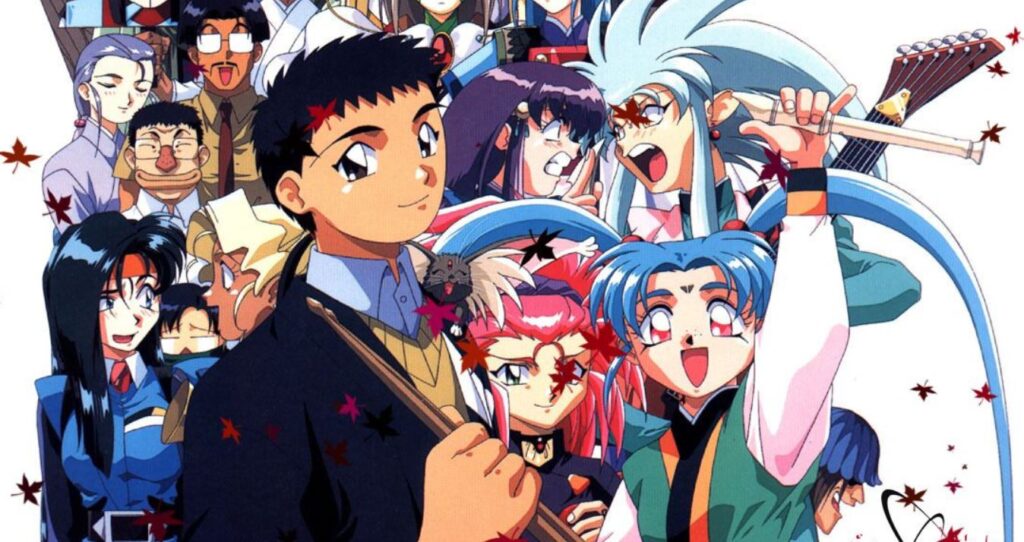 How the Tenchi Muyo! series, with its wormy and nasally protagonist and the many, often nude, alien women surrounding him, ended up airing on Toonami, sandwiched in between Sailor Moon and Dragon Ball Z eludes us. How advertisers and producers at AIC, the studio that owns the whole Tenchi bag, convince leagues of animators to keep cranking out new entries almost 30 years after its debute still eludes us.

And despite airing side by side with legends on American television, Tenchi Muyo! doesn’t enjoy 1/100th of the fanbase its broadcast neighbors continue to do so.

That said, some do have nostalgia for its golden era, and maybe being one such nostalgic, you sought out a guide to reacquaint you to all the Tenchi Muyo! anime and then some. Hard to believe, but some of that 90s sci-fi pulp is worth sifting through.

So strap in, as the series’ masochistic holdouts already know, it’s going to be a convoluted ride. 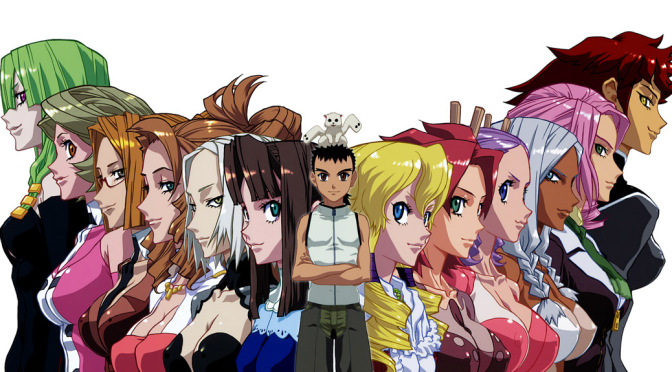 How to Watch Tenchi Muyo?

Tenchi Muyo has seven TV series, three movies, twelve OVAs, and four specials. So before we get to the meat of the guide, here is a handy list you can refer to:

From the minds of creator Masaki Kajishima and AIC came an ambitious Science Fiction / Harem OVA called Tenchi Muyo! Ryo-Ohki in 1992. There the world would be introduced to the charmingly obnoxious space pirate Ryoko and the prissy but sweet space princess Ayeka, both of whom would fall in love with some earth-hick named Tenchi.

Ryo-Ohki had a bevy of cute girls, some slick bubble era animation, and a still incredible early days digital-synthetic soundtrack by Seikou Nagaoka that, to simply put it, rocked. Fans loved Ryo-Ohki so much that AIC soon followed it up with Tenchi Muyo! Ryo-Ohki 2, some films and spin-offs following that, and an extended Tolkien-like canon via official dojinshi and light-novels which will drive you mad piecing together. 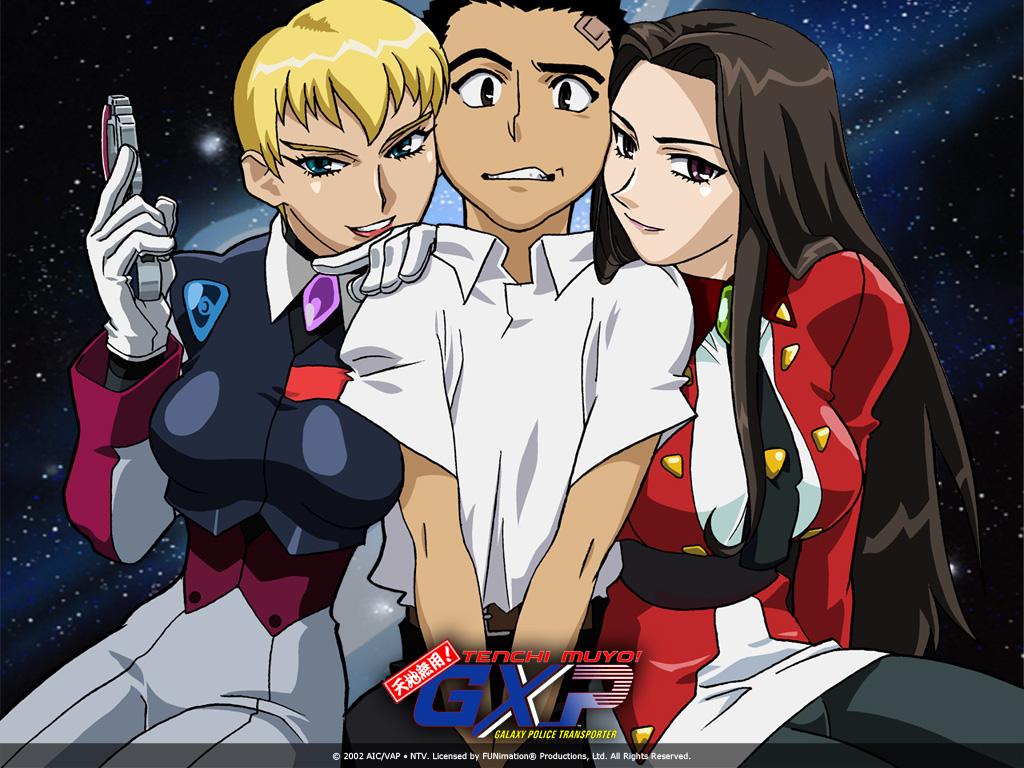 Tenchi Muyo! Ryo-Ohki continued with a not-liked third OVA in the early 2000s, and a fourth and fifth in just the last few years, which were even less liked.

A couple of the main canon spin-offs aren’t too bad: The early Tenchi Muyo! GXP series, directed by the notorious Shinichi Watanabe of Excel Saga fame, makes for some decent entertainment and begins incorporating the expanded light novel and dojinshi canon into animation. The film Tenchi Muyo! Daughter of Darkness shouldn’t be ignored either, a not-quite-canonical but rather charming ‘Christmas’ movie.

Of course the last decade saw the manifestation of the isekai Tenchi Muyo anime War in Geminar, the only mainline Tenchi work the writer of this guide hasn’t brought themselves to watch. 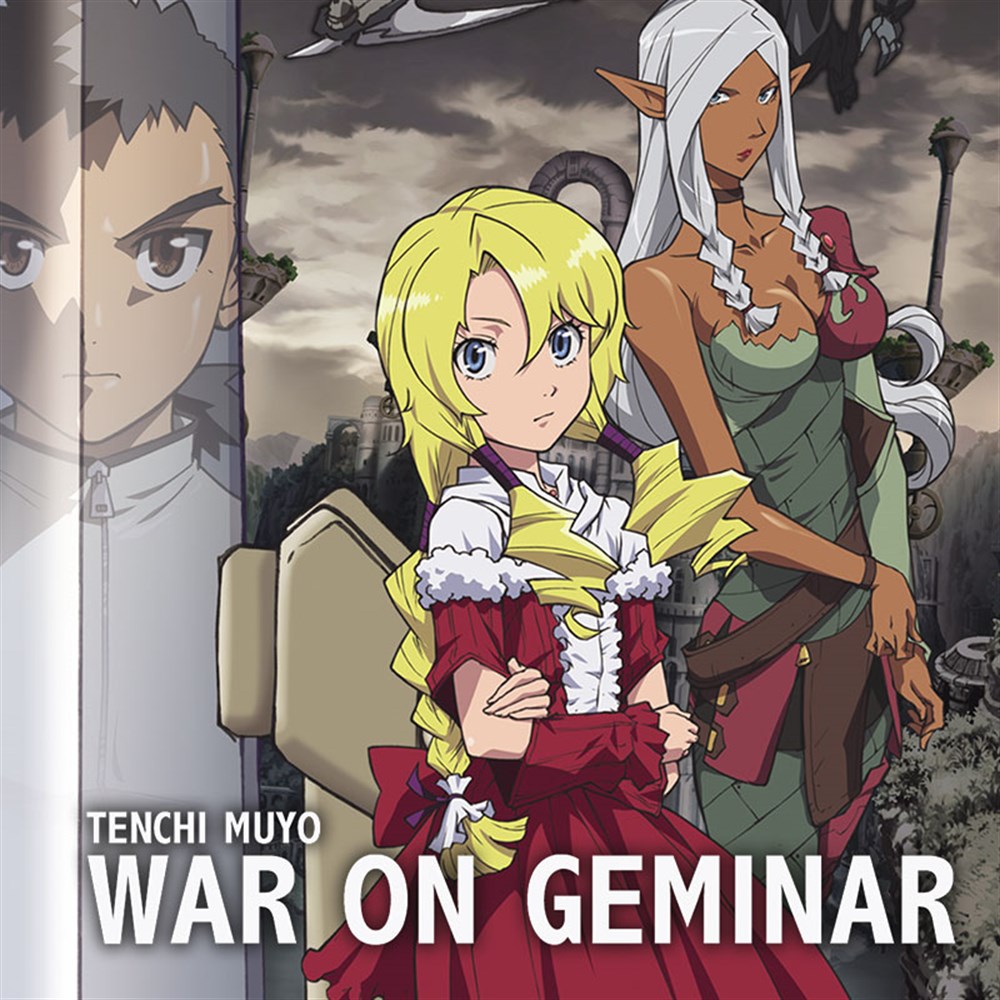 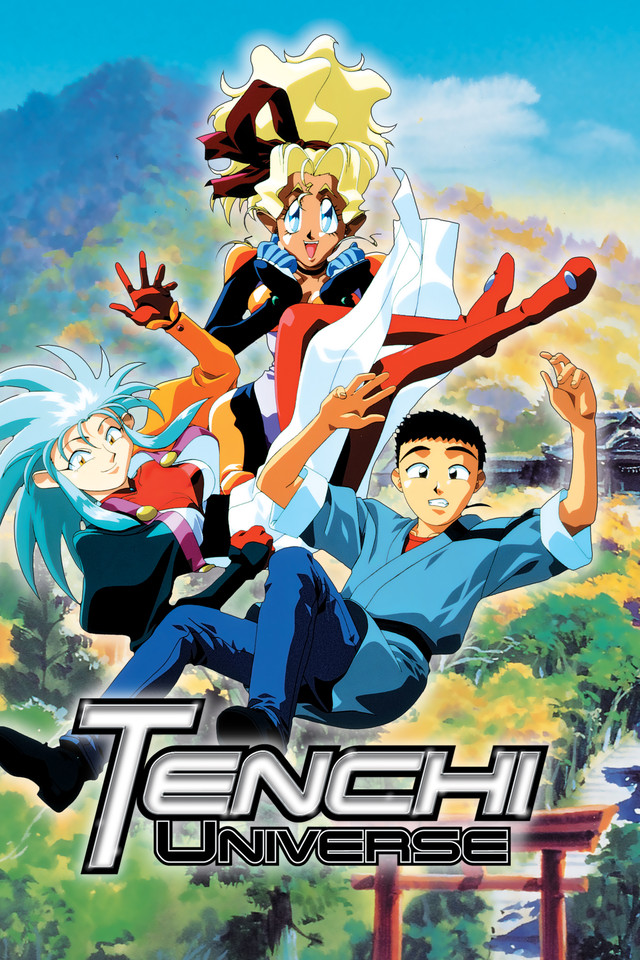 Just three years after the original Tenchi Muyo! Ryo-Ohki OVAs dropped, AIC saw fit to make a television out of their hit video series, and despite featuring little involvement from series creator Masaki Kajishima, it worked out for them.

Tenchi Universe took the plot from the original OVA and expanded it to a fully fleshed 26-episode show that allowed for more breazy harem hijinks and actual character development alike. Introducing new characters like the self serious Kiyone and a rival space-pirate to Ryoko named Nagi (neither of whom shacked up with Tenchi) helped distinct it from its predecessor.

As enjoyable as this Tenchi Muyo anime series remains, what came after cinched it as the ‘best’ Tenchi canon in our eyes. Some of the more hardcore nerds might disagree with that notion, but we promise they’re wrong. 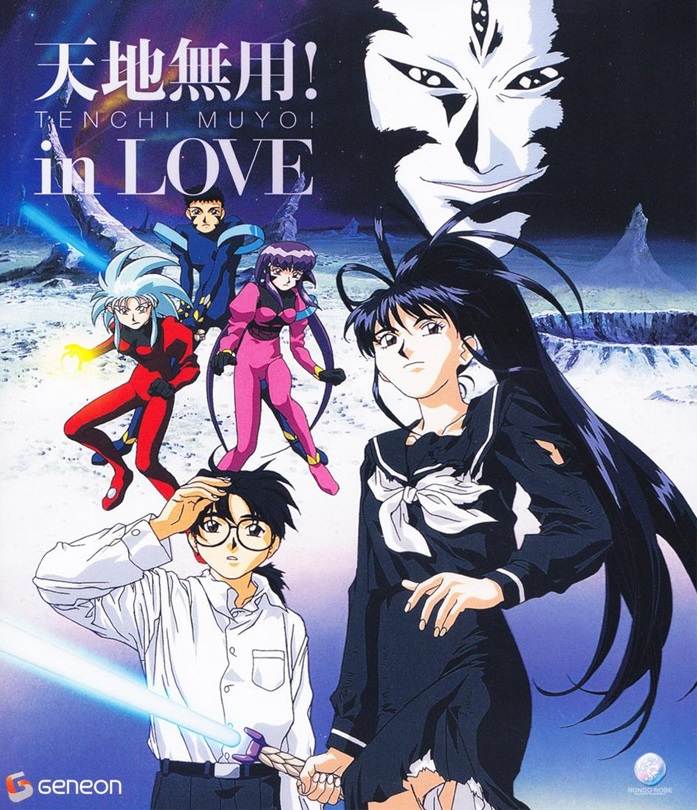 Two Tenchi Muyo anime films followed Tenchi Universe, both directed by Hiroshi Negishi who handled the Universe series and made them distinctly part of their canon.

Poignantly named Tenchi Muyo in Love, the first movie has some parallels to Back To The Future, as Tenchi and his harem slip back to when his father and deceased mother were but starry-eyed high school students. Unlike Back to The Feature, Tenchi Muyo in Love also features a gigantic space demon who wants to destroy Tokyo, and a Tangerine Dream soundtrack, resulting in a very aesthetically pleasing 90s anime flick.

Tenchi Muyo Forever, or Tenchi Muyo in Love 2 to Japanese folk, throws most of the series’ conventions away and actually plays itself out as a melancholic drama which put Ryoko and Ayeka’s feelings for Tenchi under the microscope. It’s Tenchi at its most artistic and realistic, not to mention it finally makes a couple out of Tenchi and… [REDACTED]

Why we got a second entirely different Tenchi Muyo anime reimagining only five years after its very first show, only the deepest recesses of Google may know. Even the franchise’s most ardent fans don’t look back on Tenchi in Tokyo! as fondly as they do on the shows and films that came before.

However, this anime was a valiant effort to separate Tenchi Masaki from his many alien girlfriends and pair him up with a seemingly normal human, a city girl no less, in an attempt to change things up and just maybe impart some depth to our hapless hero.

In retrospect, AIC succeeded in doing that, thereby creating something meaningfully different in the process that does retain some 90s charm even now, but we couldn’t call this piece essential.

All the Other Tenchi Muyo Anime…

Now we get the part of our Tenchi Muyo anime guide where we tell you that despite there being three main canons with one being in-canonical alternate dimension, some spin-offs exist in further undefined canons because… why the hell not!

You have Magical Project S, a full-fledged series spun-off from the Magical Girl Pretty Sammy OVA which reimagined young Sasami in the Mahou Shoujo tradition, both completely unrelated to the Sasami: Magical Girls Club series that would do the same thing ten years later. The 2014 Ai! Tenchi Muyo saw Tenchi Masaki teaching a bunch of high school girls for seemingly no reason. You then have the other works series creator Masaki Kajishima made at AIC: Photon the Idiot Adventures, Battle Programmer Shirase, and Dual!! Parallel Trouble Adventure. All were subtlely connect to Tenchi, because why wouldn’t they? 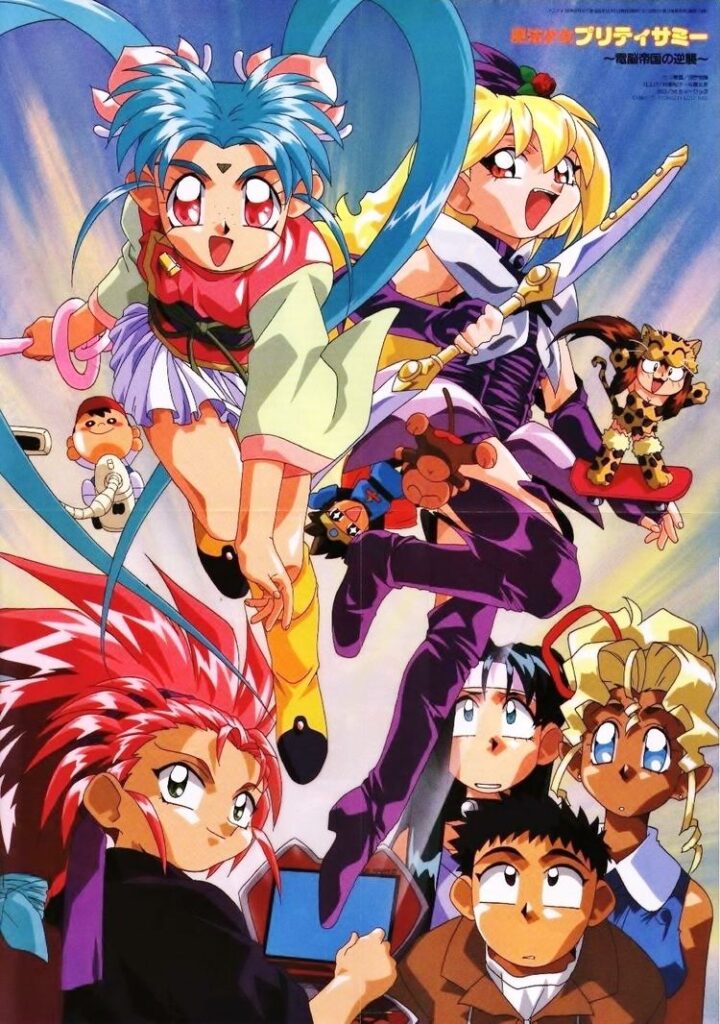 Where to Watch Tenchi Muyo?

Most of the available Tenchi Muyo anime can be found on Funimation, Hulu, and Amazon Prime.

A Guide to Tenchi Muyo: One of the First Harem Anime

Why The 5th Tenchi Muyo OVA Doesn’t Excite Us