A Guide to Tenchi Muyo: One of the First Harem Anime 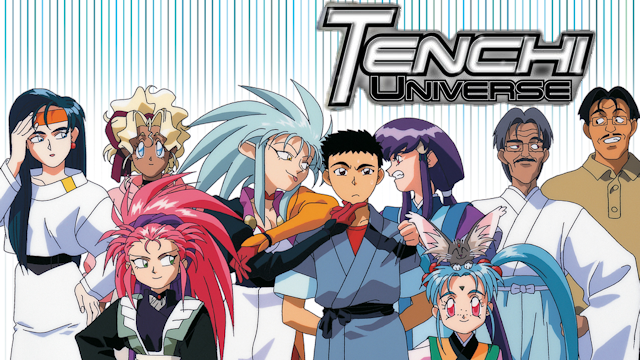 What is Tenchi Muyo? Just a normal anime about a normal guy called who lives a normal life with a gaggle of normal alien women. It is also one of the most popular and influential examples of harem-style anime.

Tenchi Muyo is a series of anime, manga, and light novels about Tenchi Masaki, a seemingly average young man living in the country with his father and grandfather, and about how their world is turned upside down by the many otherworldly women who end up living with them. Or at least that’s roughly how the series started. Because of the success of the show, there have been several spin offs and re-imaginings of the series.

If you want a guide that focuses on watch order on all the Tenchi Muyo anime, here it is:

There are Many Versions of Tenchi’s Story

The original six-part anime, Tenchi Muyo! Ryo-Ohki, was released in 1992 and covers the story of Tenchi meeting the space pirate Ryoko and her rivalry with Jurai princess Ayeka over Tenchi’s affections.

As more characters show up, including Sasami, Ayeka’s sister, Mihoshi, a bumbling member of the Galaxy Police, and Washu, a brilliant scientist, mysteries about who Tenchi really is and the history of the Masaki clan come to light.

In between the science-fiction, goddess manifestations, and cabbit (Cat/Rabbit) space fights, the humor comes from Tenchi’s attempts to remain a gentleman in the face of the women yearning for his affection.

While the series originally had six-episodes, it was given an extra episode focusing on Mihoshi in 1993, and a second run in 1994. This run also consisted of six episodes, as did the third season, which was released in 2003 along with another special episode.

In 2015, it was announced that a fourth season was in production and was released in 2016. The fifth OVA series started in February 2020 and has six episodes.

The story of Tenchi was brought to the United States in Tenchi Universe, a 26-episode adaptation of the original anime. Tenchi Universe reimagined and rebooted a few aspects of the original OVA. In this version Tenchi rescues Ryoko after her spaceship falls to earth after a space battle with Mihoshi, rather than Tenchi freeing her from a cave. 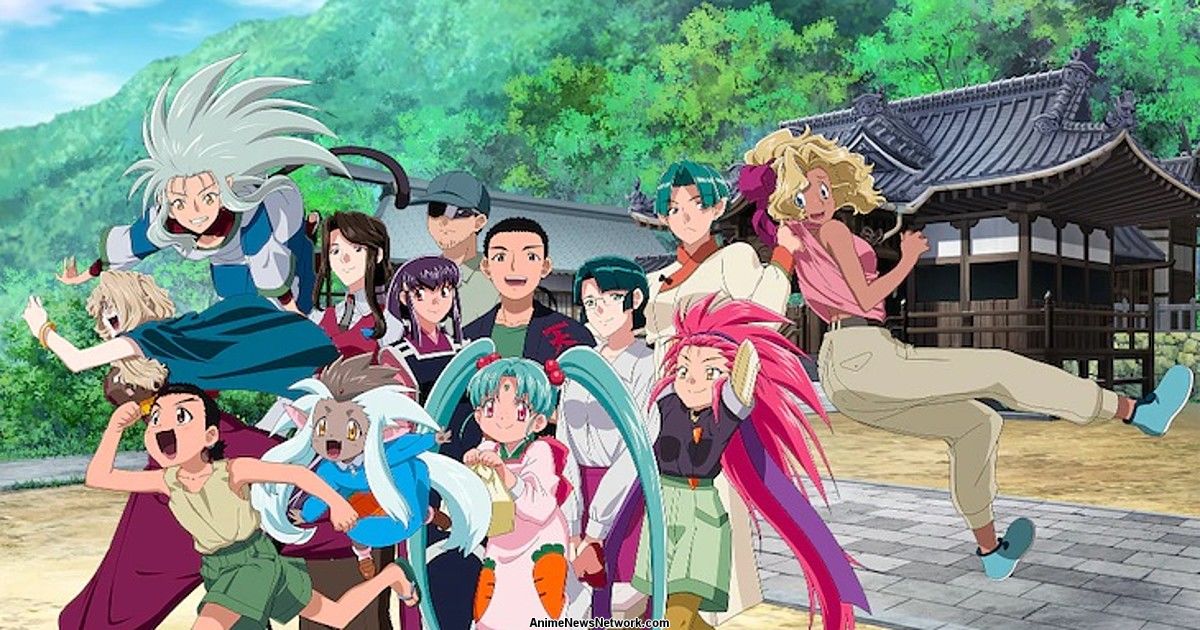 As opposed to the Tenchi in the six-part anime, this Tenchi is very similar personality-wise but is largely an average guy aside from being descended from the same race of royal aliens as Ayeka. Similarly, Ayeka and Ryoko are still intense rivals for Tenchi’s affection. The scientist Washu, in this version, is a little less implied to be a war criminal, just an egomaniac scientist. The story also follows a similar vein of imperial alien intrigue as Ryo-Ohki.

The Tenchi Universe continuation resulted in two different feature-length movies: Tenchi the Movie: Tenchi Muyo in Love and Tenchi Forever! The Movie (Also known as Tenchi Muyo in Love 2). The movies are largely standalone adventures that take place within the Tenchi Universe continuation. The only major change was with the tone of Tenchi Forever.

Previous Tenchi iterations were largely comedic and focused on the infatuations of the various house residences. Tenchi Forever was received as an action movie that opted to focus on the nature of the characters, especially Ryoko and Ayeka’s desires for Tenchi.

Tenchi has moved from his family’s home in the country to Tokyo and is developing a relationship with Sakuya Kumashiro, a classmate at his school. Obviously this is much to the chagrin of Ayeka and Ryoko, who are not fans of this new development. In this continuation, Tenchi met all the girls largely at once two years ago after Ryoko and Washu stole a crystal from Ayeka’s people, the Juraians.

Everyone from Tenchi Universe, including Kiyone, Mihoshi’s partner introduced in Tenchi Universe, crashed near Tenchi’s home as a result of this. Tenchi in Tokyo also took steps to make Tenchi more average, and his family no longer has any connections to the aliens of Jurai. 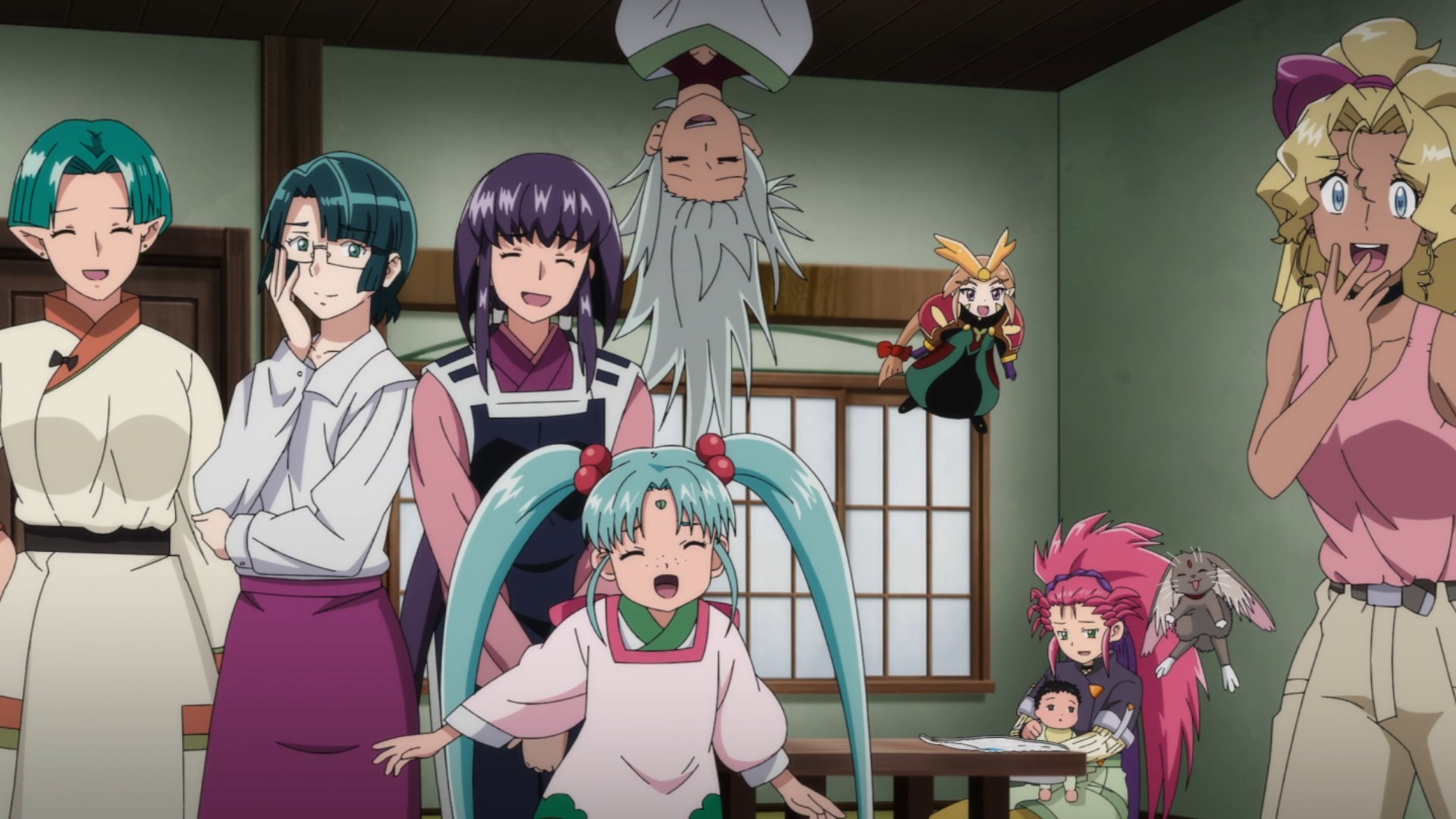 The first real Tenchi spin-off came in the form of Tenchi Muyo! GXP. In this series, the events of Tenchi Universe are supposed to be happening at around the same time as the events of GXP.

GXP focuses on Seina Yamada, an almost supernaturally unlucky boy who accidentally enrolls himself in the academy for the Galaxy Police, the organization that was originally hunting Ryoko and that Mihoshi and Kiyone were part of. In fact, it’s revealed that the GXP were looking to enroll Tenchi Masaki, and got Seina instead when he was confused for Tenchi’s apprentice. Tenchi doesn’t really show up in GXP except for a few cameos and one episode towards the end of the series.

Travel Through Worlds in Tenchi Muyo! War on Geminar

Another spin-off, Tenchi Muyo! War on Geminar, was released in 2009.

This is another spin-off that has almost nothing to do with the original OVA or Tenchi Universe. The series focuses on Kenshi Masaki, half-brother of Tenchi Masaki. Kenshi is the son of Tenchi’s father Nobuyuki and his second wife Rea, and has been flung into another dimension. On Geminar, the planet is embroiled in international turmoil, and fights their wars using mechanical exoskeletons known as Sacred Mechanoids.

Kenshi is initially shown having been conscripted to take out the new ruler of the Shtrayu Empire, Lashara. But when he refuses to go through with it after besting Lashara’s bodyguard Chiaia, he’s sent to the Holy Land, which functions as an academy for Sacred Mechanoid pilots, under the guise of Lashara’s attendant.

In true Tenchi style, Kenshi finds himself gifted at a variety of skills, which leads to many of the female students (and it is mostly female students in the Holy Land) falling head-over-heels for him.

In an effort to revive the series, Ai Tenchi Muyo! was released in 2014. This spin-off features all the original characters except for Kiyone Makibi. This may be because the show is based on an unproduced sequel to one of the Tenchi movies, but could also easily be because the creators like to shift plot elements around when it works for them. This continuation follows Tenchi as he becomes a student teacher in order to rescue two people who have slipped into an alternate dimension caused by Washu.

As this is an all-girls’ school, this leads to some awkward confrontations as Tenchi attempts to navigate the wiles of his students, the women who already live with him, and whatever else Washu has stirred up. The series was revived partially as a tourism boost for the city of Takahashi, Okayama, and thus is partly based on the tales of Momotaro, a major figure in Japanese folklore and adopted local hero of Okayama. This may explain why the main character is named Momo.

The Tenchi Muyo! series is known for its light-hearted comedy and constantly putting its male protagonist in over their head. But it’s the strong female personalities that make up the cast that keep fans fondly remembering the show and its iterations.

Throughout the show’s run, there have been dozens of characters that fans have gotten to know, and through their attachment to these characters, it makes sense that the franchise has run for more than 20 years, and in addition to its TV, film, and manga, have also generated a video game, a radio play, and a stage play based on Tenchi and his run-ins with women from space.

Why The 5th Tenchi Muyo OVA Doesn’t Excite Us