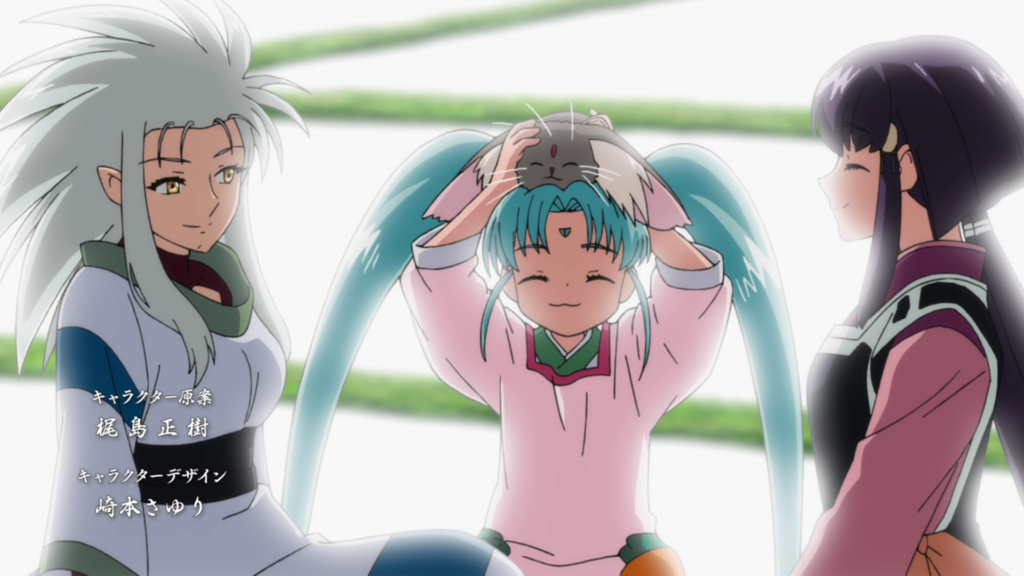 Five months ago, shortly after its initial announcement, I wrote a piece here about how the prospect of a 5th Tenchi Muyo! Ryo-Ohki OVA series wasn’t all that enticing due to its confusing expanded canon and diminishing returns. The now nearly 30-year-old franchise has been quietly churning out shows every few years even now, with both mainline, spin-off, and alternative continuities not too unlike Mobile Suit Gundam does. However, unlike that juggernaut cultural touchstone, Tenchi Muyo’s recent entries haven’t been all too good and by recent we pretty much mean anything from Tenchi Muyo! GXP on. No one’s writing home about Tenchi Muyo! War On Geminar or Ai! Tenchi Muyo, though Funimation finally brought back some original voice actors for the latter if anyone else out there was missing Petrea Buchard as Ryoko from the Toonami days.

Before we continue on with the meat of this review, I’d like to clarify about what exactly I’m talking about when I say Tenchi Muyo OVA 5 as between all the iterations of the show, and an early on American name change, it can get a little confusing for those who haven’t kept up. What we have on our hands here is the fifth installment of the mainline Tenchi Muyo! Ryo-Ohki OVA series that started the whole shebang. However, in America, the first two OVA series were aired together under the simple title Tenchi Muyo! during the golden Toonami years. The Tenchi Muyo! Ryo-Ohki name wouldn’t be used until Funimation released the third OVA series, which wasn’t made till the early 2000s although they didn’t use a ‘three’ or ‘season three’ in the title. Since then a fourth OVA series came out in 2017 which currently isn’t available in English anywhere, which brings us to this brand new fifth OVA series which Crunchyroll surprisingly hopped on. 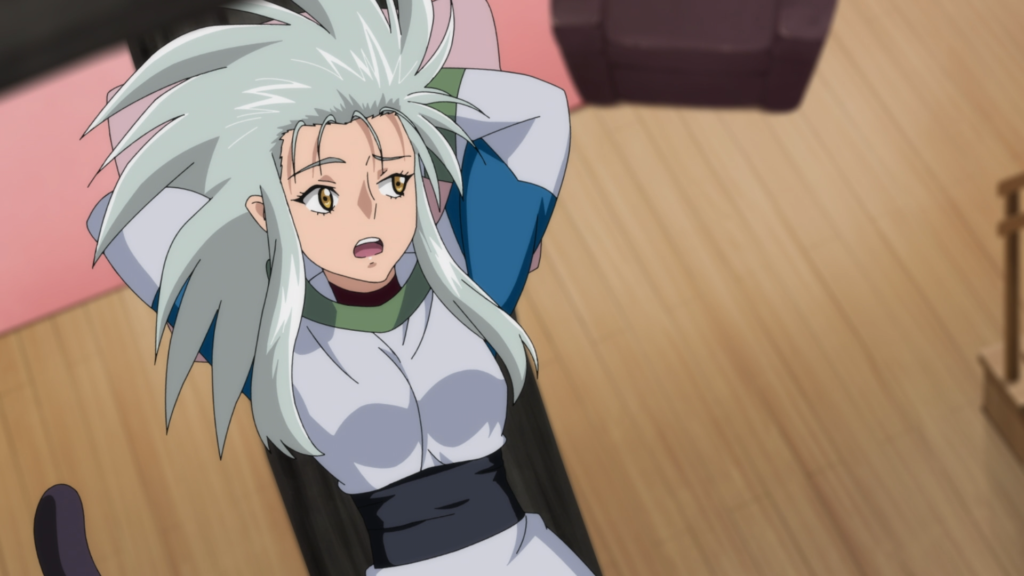 As I previously said I didn’t have high expectations for this new Tenchi Muyo OVA but the original sci-fi harem anime has been a fixture in my weeb life from its earliest days and I’ve watched more of its modern lesser iterations with a hope to a return to form than I care to admit. While even the classic 90s Tenchi shows and films aren’t required watching on the level of a Cowboy Bebop or a Neon Genesis Evangelion, I still have a lot of appreciation in my heart for its dumb slapstick comedy, a banging futuristic soundtrack, and its gaggle of alien women who have become infatuated with the milquetoast Tenchi Masaki. Later mutations of harem shows down the line from the extremely silly Love Hina to the equally silly but infinitely more artistically satisfying Monogatari series owe a debt to Tenchi too. Again, I went into this without expectations but somewhere deep down I had hope.

unfortunately, the cool synth music, the charming oafishness, and the alien harem we know and love were nowhere to be seen. Seriously Ryoko, Ayeka, and the rest of the girls don’t show up until about 14 minutes into the half-hour episode and they barely speak again after their throw away 2-minute intro scene. Instead, the first third of  Tenchi Muyo OVA 5 Episode 1 is taking up by a dull conversation between two characters that, unless you’ve kept up with every new installment of the show, you wouldn’t know. Consider the fourth Tenchi Muyo! Ryo-Ohki OVA isn’t available in English anywhere, I’m not sure what anyone outside of Japan’s supposed to do about this show. Maybe that’s technically not this show’s fault, but even if you were to read and OVA 4 synopsis nothing about these lesser characters sitting in everyday rooms having a monotone conversation with one another will compel you. 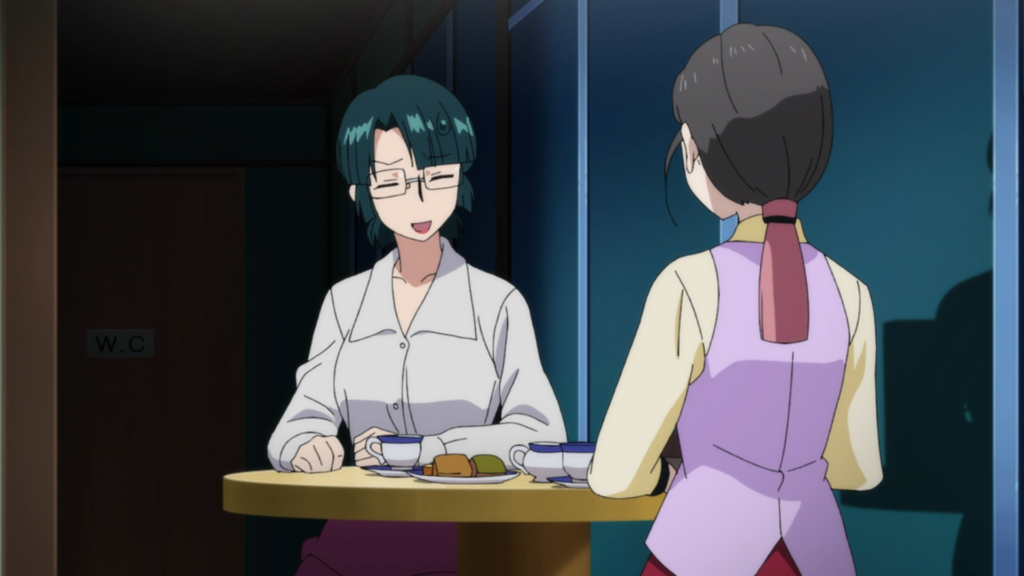 I’m not saying shows and creators can never evolve or try new things. Series creator Masaki Kajishima has been dutifully working on Tenchi Muyo anime, novels, and dojinshi for three decades and it would also be pretty boring if nothing ever changed at all for the Royal Family of Jurai, The Galaxy Police, and the criminal space aliens who inhabit Tenchi’s home and universe.  Sad to say Kajishima and animation studio AIC’s most recent ideas, such as making Tenchi a high school teacher at an all girl’s school or sending his younger brother into an Isekai world, haven’t been so hot. While they have forsaken anything too wacky into this mainline installment, much like Kingdom Hearts 3 did to its detriment, this new Tenchi Muyo OVA takes every bit of its timeline seriously. Star Wars fans bemoaned when Disney axed most of its extended canon, but it made for two pretty watchable films and at some point, Tenchi should have considered the same.

Even later in the episode after the Tenchi girls come and ago, we are brought back to that same circle of monotonous conversation. This time Tenchi and his father stick around for some increased degree of familiarity but the viewer is still just treated to a cacophony of names and events they won’t know and even if they do they won’t care about it. It’s homed in by a dedicated segment where Tenchi and co talk to Kiriko Masaki, to give the viewer a particularly lengthy unwanted update about the Tenchi Muyo! GXP cast. The closest the first episode of Tenchi Muyo OVA 5 comes to its predecessor in comedy is when Tenchi’s new little brother Kenshi trying to annoy some Alien girl who was maybe introduced in the OVA four? It would have been one thing if characters like Ryoko or Washu took part in these talks, but alas we aren’t so lucky. As an added insult to industry, the colorful unique flourishing synth soundtracks Tenchi Muyo! and Tenchi Universe by Seikou Nagaoka are long gone. 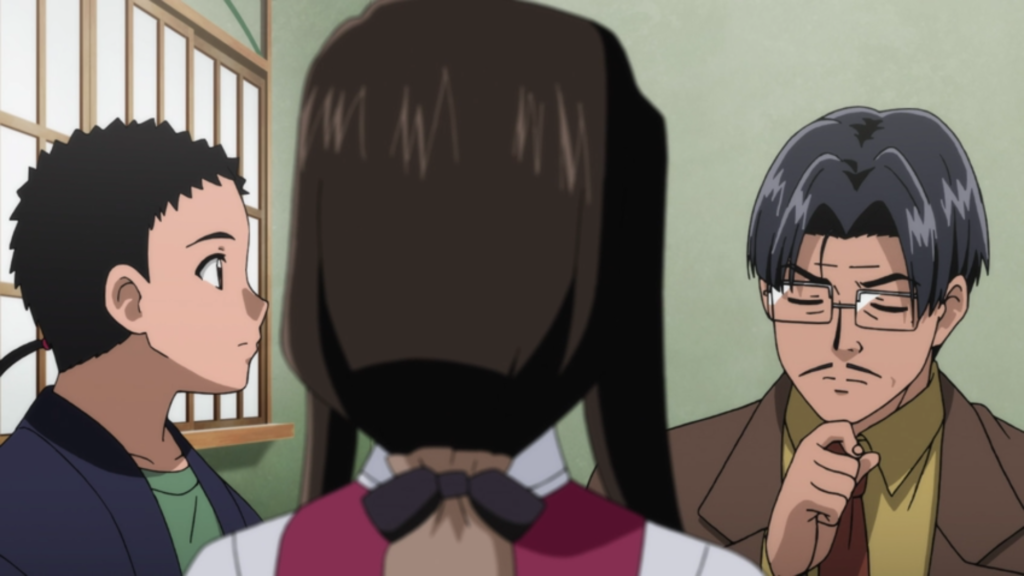 This isn’t the Tenchi Muyo! you know and love. The first episode of the new Tenchi Muyo OVA series mostly serves to highlight just how long its been since the franchise’s halcyon days. It spends some time recapping events that occurred in OVA 4 and in side-story novels that only the most dedicated of fans have read. To anyone without a complete understanding of the series though, it only serves to confuse and alienate. Those hopping in, seeing their old Toonami favorite making an unexpected return, will not only be disappointed by the canon mess but by the fact that the charm and humor are totally absent. Even in the little bits we see our Ryokos and our Ayekas, they’re toned down iterations of their old characters. To get a little more optimistic, the episode leaves off with some set up for what’s to come and maybe with the catch up out of the way, this new series can tell its own story and grow into its own legs a little more. For now though? It’s hard to recommend to anyone.

You can watch the first episode of the new Tenchi Muyo OVA on Crunchyroll, with the next set to come out at the end of May.