Terra Formars: The Intergalactic Allure and Adventure of the Anime Series 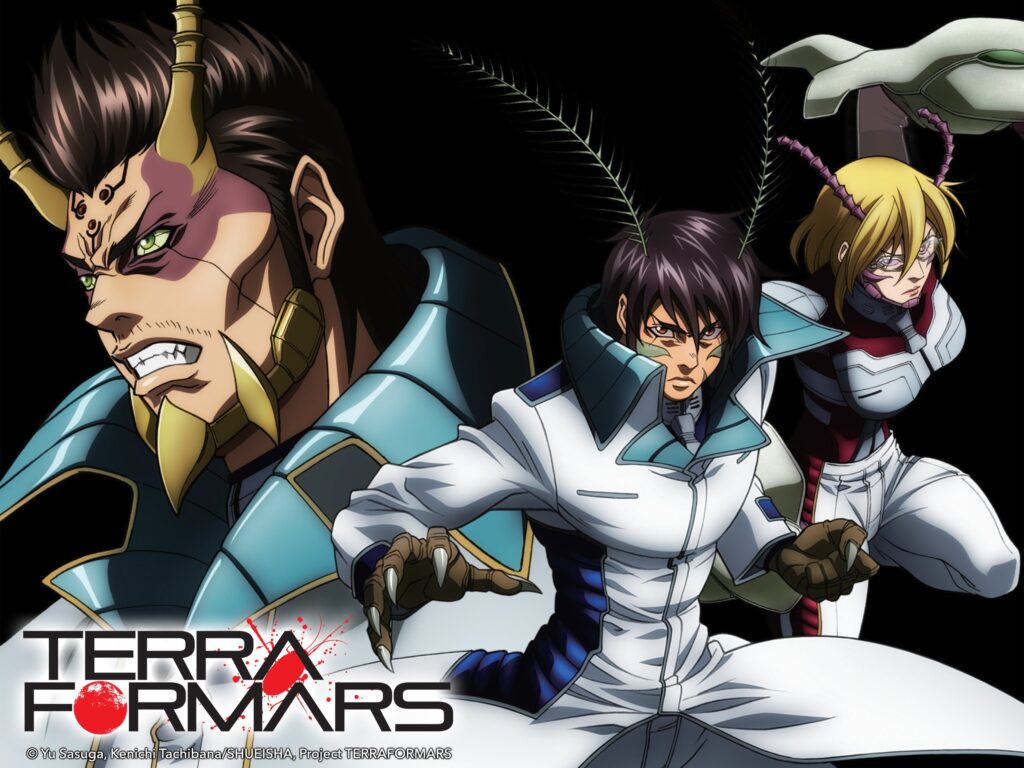 Originally released as a Japanese manga series in 2011 written by Yū Sasuga and illustrated by Kenichi Tachibana. A 13 episode anime series aired from September -December 2014 and is set in the annex 1 arc. Season 2 aired from April to June 2016 and consisted of 13 episodes as well.

It is a gripping story centered around the intersection of science and world catastrophe. In the 21st. Century scientists send algae and cockroaches to Mars to continue their experimentations of terraforming the planet.

Flash forward nearly 500 years into the future, the year is 2577 and the first expedition to Mars is being planned to find the predicted cure from a virus that is plaguing the earth. Unfortunately upon arrival, the six crewmates are attacked and killed by giant mutated humanoid cockroaches with incredible physical strength.

Two years after this horrible attack, genetically modified humans are sent for another mission called BUGS II and their prerogative is to collect 10 samples of both sexes of roaches, exterminate the mutated bugs and take control of the red planet. However, in this instance, only two survive, and as the third expedition is planned more and more skepticism arises surrounding the nature of the Alien Engine Virus, or A.E. Virus and a potential unknown connection to the terraformers.

The crew members undergo invasive surgery to obtain an additional organ that will allow them to have similar strengths and features of the organisms on mars, with only a 36% chance of surviving just the surgery.

Season 3 of the anime series is desired with still a popular following; however, due to the low ratings of season 2.

The Characters of the Metaphysical Colonization of Mars

As the plot continues across 22 manga volumes, the anime series follows the battles and upheavals of the human mutants’ alleged missions to exile all the terraformers and claim Mars for their own. Perhaps with a naivety of underestimation, terraformers are armed with weapons beyond what the human crew could fathom.

Additionally, they have shown their immense ability to organize and carry out tactical fighting efforts the human crew did not anticipate. The series opens with the main character Akira Hizamaru battling a bear to earn enough money to be able to have the surgery to become a part of the annex project to find a vaccine for A.E. Virus and his insect base is the Bagworm Moth.

In other character modalities, we are led down an existential development and backstory of the how and why these individuals want to surrender themselves to the Annex Project to find a vaccine on Mars. We are slowly unveiled why we should care about these characters, their fight and can truly come to a point of empathizing with them, which is one of the show’s strongest parts.

Captain Adolfe Reinhard is another character that carries this show in an encaptivating manner. He was previously a German soldier with an immense amount of power and strength. As a child, he was a test subject and formed the electric eel, which allows him to conduct electric currents throughout his body.

Shokichi Komachi is a character who is a member of both the BUGS 2 expedition and the Annex I and has a strong sense of justice.

Sylvester Asimov is a Russian man and a militant that chose to join the Annex Project to save his daughter from the deadly A.E. Virus that afflicts Earth.

Michelle K. Davis is an American girl and the only daughter of Donatello K. Davis, the captain of the BUGS2, and a healthy woman. Like Akari Hizamaru she did not have many friends. She is also one of the few people who were Post-Surgery born.

The World of Mars and Beyond

The journey to Mars takes the show across battles and violence with the Terraformers. But also the animation is breathtaking, not just of the characters, but there are moments of peace and interludes of solitude as the depicted landscapes of Mars offer a beautiful juxtaposition to the violent warfare.

The theme of colonization and fighting for the survival of mankind offers a code of honor and creates the urgency for what individuals value and hold onto at the crux of chaos and upheaval. This anime although it’s plot is simple excels in its depiction of violence and character development.

There are plot twists and gaps, which leave questions and things out of context, which perhaps would be easily followed if you’ve read all the manga. Overall, an entertaining spectacle of relentless killing cockroaches as humankind fights for their existence in Mars

First and foremost it should be acknowledged that there is an uncomfortable human resemblance that the roaches take on. They could easily be mistaken for humans in certain lighting or with a specific posture, but with a still inherent slein form. The name ‘Terraformars’ also refers to them as humans even though they have antennae and wings, they kind of look like huge cavemen or trolls from some mythical universe. Their characteristics include toes, teeth and eyes that appear much more human than insect. Also their weaponry all feel man made and operational by a human such as clubs. They have an archaic social organization, but one nonetheless. Despite this strange assimilation, the animation and show is gorgeous and well done. The character design is impeccable and the CG of equipment is impressive. However, the main ship is over exaggerated with space and makes their journey to mars feel illogically fast for a chemically fueled vessel. The landscapes of transformed Mars are incredible with a lot of the show’s action taking place at night.

Some of the characters are less than inspiring and don’t really add much depth to the show, but on the other hand there are great interesting characters who get wiped out a bit too early. However, the way the characters large and small in coordination with backstories intersect add neatly into the main tale. There is a woman who wets herself in crisis juxtaposed with the badass Michelle K. Davis is really funny. The closing themes also leave a lot to be desired; however, there is mild experimentation that improves them.

The show has a familiar allure of ‘cartoon heroics’ and a winning sense of bravado with a sentimentality that is hard to overlook. Typically backstories are revealed and explored after a character is dead or will be soon. There are archetypes and iconography that parallel back to the tradition of John Wayne war movies, but there is an added element of gruesomeness that is a bit exponentiated in this anime series. But in totality watching the series, it can feel hard to engage in the tension against the bugs. It was hard to find a framework to really logically and emotionally resonate with as sometimes it felt that the humans really kind of did it to themselves and the bugs are merely defending themselves against said invaders who are attempting to pillage, colonize and kill their people. This continues to grow and permeate throughout the show, a gradual uneasiness of perhaps rooting for the wrong side, at least in the way the story is framed.

A show that is nothing short of action, adventure, nuance and morality, Terraformars definitely delivers all of this. Although at times there can be a disconnect with the physical character design of the bugs or the reasoning of the conquests, the show’s framework and roots are fantastic and entertaining. It is an original concept that will engage, surprise and maybe leave you questioning as well.